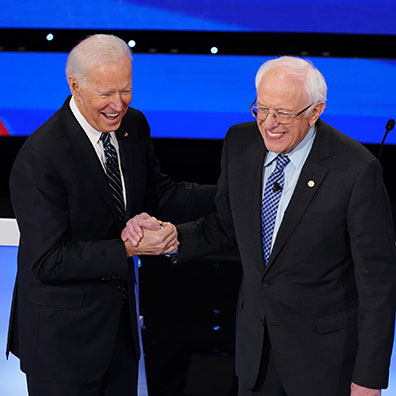 Revolutionaries “speak the the truth to the masses, no matter how bitter it may be,” as Leon Trotsky emphasized in the “Transitional Program” of the Fourth International.1 When in 2016 and again in 2020 Bernie Sanders ran in the Democratic presidential primaries promoting a politics of the “99%” against the “billionaire class,” we described his “political revolution” as a means to rope disaffected youth and workers back into voting for the Democratic politicians.

Today Sanders, the spiritual grandpa of “leftists” busy rebranding the same old arguments for Democratic Party electoralism, has stopped even pretending to oppose the “establishment” Democrats he gained popularity by denouncing.2 When he dropped out of the 2020 presidential race and endorsed Biden, we noted that this is Sanders’ modus operandi:

“[Sanders] revved them up, registered them as Democrats and lined them up for the November 2020 vote. In April, Sanders dropped out of the primaries, throwing his weight behind the embodiment of the ‘Democratic establishment’ his followers had reviled: Joe Biden. Like we said from the beginning: Sanders’ so-called political revolution was and always has been a political scam, in the service of the Democrats.”

His “insurgent” campaign over, his voters duly delivered to Biden, he has been given the new job (by the same Democratic “establishment”) of being head of the Senate Budget Committee. Yes, he’s one of the team. According to Sanders, Biden’s budget bill is “the most consequential piece of legislation for working people, the elderly, the children, the sick and the poor since FDR and the New Deal of the 1930s.”

While Sanders is reluctant to label himself as “pragmatic,” his former campaigners are willingly adopting it for him. Joseph Geevarghese, the executive director of Sanders’ Our Revolution PAC, announced the group’s new vision as that of “pragmatic progressives,” focused on campaigning for “progressive” Democrats, like former Ohio state senator Nina Turner, as “part of the overall ecosystem of the progressive movement” (Associated Press, 29 July).

The vacuous term “progressives,” no matter how obsessively it is repeated, cannot hide the fact that capitalism has been a thoroughly reactionary system for well over a century. Like the Republicans, though with different rhetoric and sometimes different tactics, the purpose of the Democratic Party is to administer and defend that system. As Nancy Pelosi said back in January 2017, “we’re capitalists and that’s just the way it is.” A big part of why capitalism has survived this long is that misleaders of workers and the oppressed have kept subjugating them to this party of the bosses. Along the way, pseudo-socialists always keep coming up with new excuses to lend them a hand.

Against them, we Trotskyists highlight Karl Marx’s point that the working class needs its own party, which “must never be the tagtail of any bourgeois party; it must be independent and have its own policy” (1872). Building such a revolutionary workers party is crucial for a socialist revolution that will overthrow capitalism and usher in a workers government.

Then there’s Alexandria Ocasio-Cortez (AOC), who together with the rest of “the Squad,” is venomously accused of being “communist,” “unpatriotic,” etc., by misogynistic and racist rightists. In reality, they are liberal Democrats who have pledged allegiance to the red, white and blue, in words and deeds, over and over.3 Similar to Sanders, they advance the illusion that the Democratic Party can be made to “serve the people.” When Ocasio-Cortez bested longtime Democratic congressman and power broker Tim Cowley in the 2018 Democratic primaries, going on to win his Congressional seat, we made the point that, like Sanders’, her campaign sought to rebrand the Democratic Party, to make it palatable for a new generation of youth. 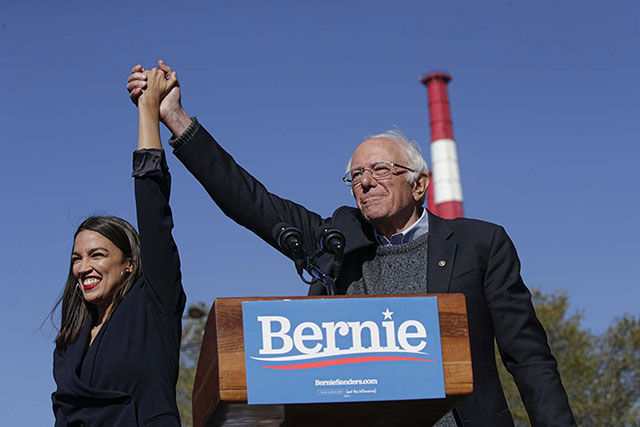 AOC was promoted by the “Justice Democrats,” and nominally joined the Democratic Socialists of America (DSA), which at the City University of New York, for example, plasters her image on its leaflets. From the beginning, we told it like it is. A “socialist” in the Democratic Party? No way:

“Far from seeking to bury the world’s oldest capitalist party, the ‘democratic socialists’ ... seek to rescue, rebuild and refurbish it. That has always been the reason for existence of the Democratic (Party) Socialists of America, which Ocasio-Cortez joined after the DSA endorsed her campaign….”

–“Alexandria Ocasio-Cortez to the Rescue of the Democratic Party,” The Internationalist No. 53, September-October 2018.

In contrast, reformist groups on the left tailed the DSA as an express ticket to the political big leagues. Two examples of this are Socialist Alternative (SAlt) and the misnamed International Marxist Tendency (IMT). Both these groups share the political heritage of the “Militant” tendency that submerged itself in Britain’s ultra-reformist Labour Party, in which it claimed that socialism could be inaugurated through a parliamentary “enabling act.” (This social-democratic outlook is also why both of these tendencies have long claimed that cops are “workers” and even supported police and prison guard “strikes.”4)

For its part, SAlt wrote of AOC that she could “provide a bold lead” as a “socialist” in office (Socialist Alternative, 4 October 2018), while the IMT characterized her as a “socialist” who defeated the “Democratic machine” (Socialist Revolution, 1 July 2018). When AOC groaned that in any other country, she and Joe Biden “would not be in the same party,” both of those groups latched on, launching flights of fancy that landed them in opportunist fantasy land.

SAlt declared that “Bernie and AOC could lead millions of working class and young people out of the corporate straight jacket of the Democratic Party and into a new, truly democratic, party for the working class” (Socialist Alternative, 17 January 2020, italics in the original). Similarly, the IMT pretended she was threatening some kind of break with the Democrats, and built their own fantasy scenario on that basis: “if a mass socialist-labor-workers’ party existed in the US, we can be sure she would be on the reformist right wing of that party instead of in the capitalist Democrats” (Socialist Revolution, 24 January 2020).

What was the purpose of these ridiculous daydreams? To justify their abject tailing of bourgeois politicians who seek to lead young people into the same old dead end of rejuvenating the Democratic Party. Along this road, generations of erstwhile activists have been made into Democratic hacks. Meanwhile, AOC’s ruminations that by rights she oughtn’t be in the same party as Biden have quickly been left behind. An interview with AOC by DSA magazine Democratic Left published on March 19 was enlightening. Far from “Talking Socialism” as the title claims, the core of the interview is Ocasio-Cortez going after Biden’s critics on the left with a vengeance. When asked what her view is on those who “conclude that no progress is going to come out of the Biden administration,” she had this to say:

“Well, I think it’s a really privileged [!] critique…. For anyone who brings that up, we really have to ask ourselves, what is the message that you are sending to your Black and brown and undocumented members of your community, to your friends, when you say nothing has changed? …When you say ‘nothing has changed,’ you are calling the people who are now protected from deportation ‘no one’.”

That interview has not aged well. Upon taking office, Biden immediately ignored his pledge of no deportations in his first 100 days, deporting almost 29,000 people in just his first month in office.5 So the “undocumented members of your community” that AOC referred to would be expressing “privilege” if they denounced Biden’s deportations? And critics of pro-cop “shoot ’em in the leg” Biden, infamous for his long Senate career promoting segregation, are “privileged” to oppose him? Please.

It is the duty of revolutionaries to “tell the truth to the masses” about bourgeois politicians like Bernie Sanders and Alexandria Ocasio-Cortez, instead of opportunistically following along whenever they “talk left.” Those groups that claim to be socialist but nevertheless indulge the idea that there are “socialist” politicians in the Democratic Party are entrenching illusions among workers and youth – the opposite of what genuine socialists are about. The urgent need today is to break from the Democrats and build a revolutionary workers party.