British EU Referendum:
Who Voted for What, and Why

Various commentators seeking to explain the unexpected victory for Brexit declared it a veritable working-class revolt. (As usual, “the working class” is only taken notice of in bourgeois media in order to label it racist.) In paternalist tones it is declared that opposition to racism and chauvinism among some workers is mere middle-class snobbery rather than dictated by the need for united class struggle. Ostensible leftists with an anti-EU position also bought into the claims that it was a working-class vote, to justify their own capitulation. They all had virtually indistinguishable reactions to the referendum results:

“It is a gross oversimplification to reduce this to a vote over racism. The vote was, above all else, a rebellion by working class people who feel they have had their lives torn apart by the ruling elite” (Socialist Workers Party: Joseph Choonara, “After the leave vote: we can beat back racism and austerity,” Socialist Review, July-August 2016).

“[I]t is completely false to suggest that the exit vote had – in the main – a right wing or racist character. Of course, some of those who voted for exit will have done so for racist or nationalist reasons, but the fundamental character of the exit vote was it was a working class revolt” (Socialist Party of England and Wales, “Britain: After the referendum,” 27 July).

“[O]nly the wilfully blind in the workers movement will see the vote for Brexit as simply a boost for UKIP and the Tory right wing. Cameron has resigned, the Conservatives have been bitterly divided, the capitalist rulers of Europe are in shock. The time is ripe for workers struggles to begin to claw back decades of concessions” (Spartacist League/Britain, “Brexit: Defeat for Bankers and Bosses!” 24 June).

Yes, the Brexiteers were able to mobilize a layer of mainly older, white, conservative English workers. But they did not do so on the basis of opposition to capitalism. In fact, in exit polls those who opposed capitalism were split 50-50 between “Remain” and “Leave.” Those who disapproved of “multiculturalism” and “feminism” (whatever they may understand by those terms), as well as immigration and even the Internet, tended to vote for Brexit. Such backward, often pro-Tory sections of the working class are not new. And while previously they may have voted for the Conservatives, in recent elections a certain number of blue-collar workers hit by collapsing living standards and declining numbers of good jobs have been attracted to UKIP, blaming their fate on the arrival of immigrant workers from other EU countries. 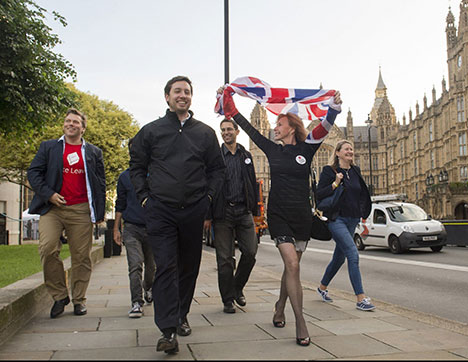 Supporters of “Leave” celebrate the day after the referendum in Parliament Square. The large majority of “Leave” voters were middle-class. (Ansa)

The claims that Brexit was a working-class revolt are cheap populism based on a perversion of the statistics. First of all, some 64% of Labour Party supporters voted to stay in the EU. Secondly, many workers did not vote at all. While Leave won with 17.4 million votes, as against 16.1 million for Remain, some 13 million registered voters did not go to the polls and another 7 million eligible voters are not registered. As in most advanced capitalist bourgeois democracies, the proportion of non-voters is greatest among workers, poor and young people. According to an analysis in BMJ (formerly British Medical Journal) of 6 July, 59% of those who voted for Leave were middle-class and only 24% were semi-skilled or unskilled manual workers or the poor.

That said, there were significant numbers of working-class voters in depressed industrial areas of northern England who voted for Brexit. Article after article focusing on particular localities described genuine concerns in the population about the shrinking number of jobs, schools and hospital beds fueling the vote against the EU. But this sentiment simply accepts that these things are going to continue to disappear, it accepts the rotten state of decrepit British capitalism as a given and advocates that somebody else (i.e., immigrants) should pay. This in turn is the product of decades of capitulation to Thatcherite austerity, maintained and deepened of course by Tony Blair and Gordon Brown’s pro-capitalist Labour governments. 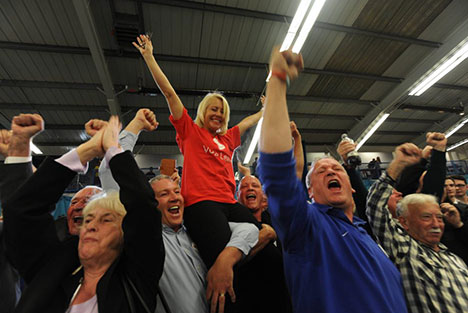 Even allegedly more militant trade union leaders, such as the RMT (Rail, Maritime and Transport Workers) accept this framework, seeking to persuade the capitalists not to hire foreign labor or get the capitalist state to ban it, rather than making a serious attempt to organize immigrant workers themselves. They posture as the best defenders of the “national” interest. Thus the RMT protest against the takeover of Northern Rail by Arriva (a subsidiary of Deutsche Bahn) this April was a stunt which consisted of raising the German flag over Manchester station. And Bob Crow, the RMT general secretary who died in 2014 had declared “Free movement within the EU impoverishes workers.”

Those workers who supported Brexit did not do so on a class basis but largely on a nationalist appeal. Nor did calling on them to vote for Leave in a campaign dominated by denunciations of “uncontrolled immigration” raise their class consciousness. There were, after all, plenty of workers in Scotland and Northern Ireland who voted to Remain, as did 67% of Asian voters, 73% of black voters and 73% of 18 to 24-year olds. And then there were the 2 million immigrants from EU countries, who were excluded from voting. In addition to the large number of European immigrants in health care, more than 40% of the workforce in canning, bottling and packing plants are immigrants, as are one-third of all manufacturing workers. 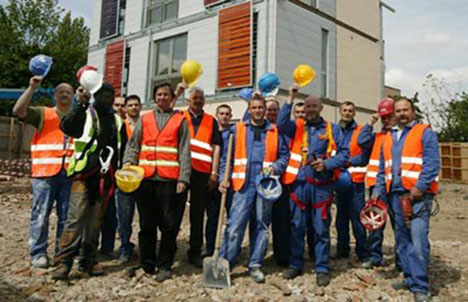 Polish construction workers in London. Immigrant workers are now a key part of the British working class.  (Frank Baron for the Guardian)

Immigrant workers are now part of the core of the proletariat in the British Isles. Opposition to all of the divide and rule schemes, to any attempt to scapegoat them for the crisis of British capitalism, is a matter of life and death if there is going to be any kind of successful working-class fight against that crisis. That is why in the referendum battle, in which both sides attacked immigrants, revolutionary Marxists had no side, and why we in the League for the Fourth International counterposethe fight for full citizenship rights for all immigrants to both Leave and Remain. As for bringing down the imperialist bloc of the European Union, that cause will not be furthered under the Union Jack of British imperialism (or the Cross of St. George flag brandished by English chauvinist Brexiteers) but under the red flag of proletarian internationalism. ■