Only Revolution Can Bring Justice! "Justice for Daunte Wright" on the street in front of the memorial for George Floyd in Minneapolis, April 12. Amid the trial of killer cop Derek Chauvin, racist police terror never stops.
(Photo: Joshua Rashaad McFadden for The New York Times)

The following statement was issued as an Internationalist Group leaflet on the evening of April 20.

A jury in Minneapolis just found killer cop Derek Chauvin, who lynch-murdered George Floyd last May, guilty on all counts: second-degree manslaughter, third-degree murder and second-degree murder. Given the massive upheaval last summer, when millions marched in the streets, day after day, when the Third Precinct in Minneapolis burned down as thousands cheered, the capitalist rulers calculated that they had to give up one of their murderous killers in blue, or else.

Last year alone, police in the U.S. killed 2,206 civilians, and now one has been convicted of murder. Justice? Of the 13,000 police who killed people in the decade and a half prior to 2020, only 140 (1.1%) were ever charged with murder or manslaughter, and only 44 have been convicted, usually of a lesser crime. Last week the police murderers of Daniel Prude in Rochester were let off, before that the killers of Breonna Taylor walked, and the police murder machine grinds on: Daunte Wright in Minnesota, Adam Toledo and Anthony Alvarez in Chicago just in the last three weeks. Who’s next? 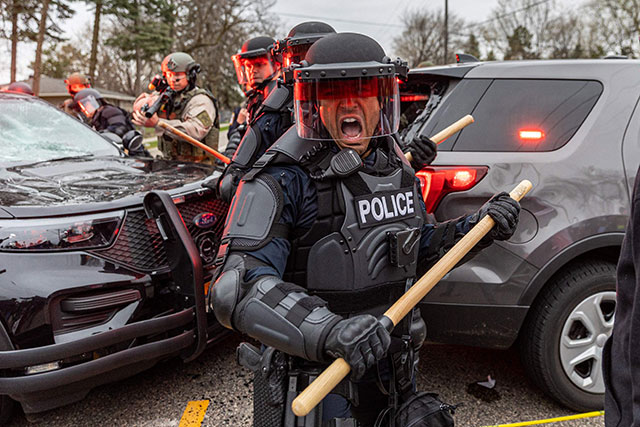 The capitalist rulers will claim that “things are beginning to change,” even as they impose unprecedented massive police and National Guard occupation of Minneapolis and other cities, ordered by Democratic governors and mayors. Racist police terror is systemic in U.S. capitalism, and will only end when this system is overthrown. The struggle goes on. The Internationalist Group and Revolutionary Internationalist Youth are demonstrating, highlighting our slogans: No Justice in the Capitalist Courts! Only Revolution Can Bring Justice! Democrats Are the Bosses of the Racist Killer Cops! Black Liberation Through Socialist Revolution!  ■ Cops Killed 2,200 Last Year
No Justice
in the
Capitalist
Courts