Solidarity from CUNY – All Out to Win 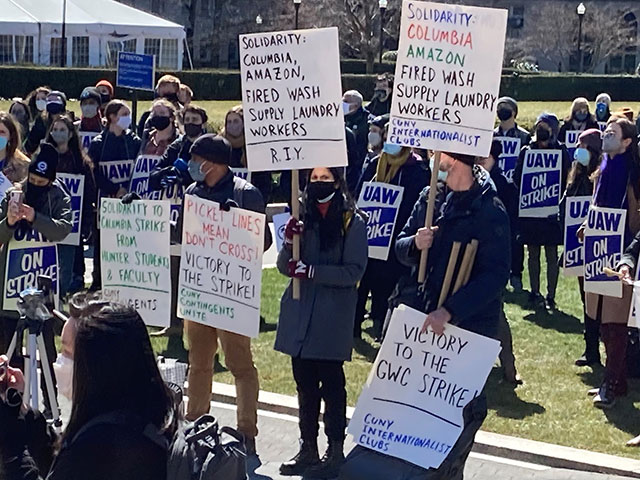 Spirits were high on the 200+-strong picket line as Columbia University research and teaching assistants launched their strike on Monday, March 15. Defying the haughty barons lording it over this fiefdom of academic privilege – which has the nerve to claim poverty as it sits on a $11.26 billion endowment – the strikers chanted “What’s disgusting? Union-busting!”

Organized in the Graduate Workers of Columbia (GWC), which for two years has been bargaining for its first contract and is part of UAW Local 2110, the strikers denounce “starvation wages,” the university’s resistance to improvements in health coverage as well as its provocative refusal to accept a “union shop” or even measures the union holds essential to protecting its members against discrimination and harassment.

Coming amidst the inspiring organizing drive of largely African American Amazon workers in Alabama, an important nurses’ strike in Massachusetts that began on International Women’s Day, the fight against the Liox/Wash Supply company’s union-busting firing of immigrant women laundry workers here in NYC – and soon after the major Teamsters strike at Hunts Point market in the Bronx – the Columbia strike may be part of the beginnings of a new upsurge of labor struggle.

For us at the City University of New York, solidarity with the GWC strike is connected to our fight against adjunct poverty, the two-tier labor system, course cuts and the conditions that make just getting an education harder than ever for CUNY’s students, whose families are largely workers deemed “essential but disposable” amidst the crises of this decaying capitalist system. We need a CUNY-wide strike. As this would go up against New York State’s vicious Taylor Law – which “prohibits” strikes by public employees and has been administered by Democrats and Republicans alike – solidarity would be crucial to a CUNY strike. The stakes are big, and as clarity is crucial, we will address the issues frankly.

For GWC strikers, uniting with CUNY is also part of breaking free from the confines of Columbia’s overwhelmingly white ivory tower, smack in the middle of Harlem. This is essential for uniting with the workers and oppressed who have the power to bring to their knees the racist plutocrats who are trying to break your union. Recall that Columbia’s flagrant racism towards the Harlem community, and its links to U.S. imperialism’s genocidal war against Vietnam, touched off the huge student strike of 1968.

The same NYPD that carried out a bloody police riot against the 1968 strike is notorious for cop terror against black people today. Meanwhile the Columbia administra­tion’s arrogance is unabated, as it tells GWC strikers they don’t “deserve” protection against discrimination and preaches “mutual realism” (sic!) to student workers struggling to pay their rent in the midst of a pandemic.

To defeat the anti-union administration and its ruling-class godfathers, however, it is not enough to be right and have justice on your side – it’s a question of power. On strike means shut it down. All classes should be stopped, now, and students brought out en masse to the pickets and rallies. Moreover, as shown in one strike after another by grad students, TAs, adjuncts and others across the country and here in New York, including by UAW 2110 (see box on other side): for university strikes to win, all sectors of the campus workforce need to unite in genuine solidarity – one out, all out. Picket lines mean don’t cross!

At the March 15 rally marking the first day of the GWC strike, the president of the NYC Central Labor Council gave a speech vowing that the city’s labor movement is behind the strikers 100%. But words are not enough – if the city’s major unions built mass pickets to shut Columbia down, the strike could be won in a day. We need to fight for this to happen. But why doesn’t the labor leadership put real muscle behind the words of solidarity, even in struggles much bigger than this? First and foremost because it subordinates the unions to the Democratic Party of U.S. imperialism, which together with the Republicans has administered the capitalist system for more than a century and a half.

This too was on display at the strike launch rally. It’s not unusual for labor leaders to put a couple of “friend-of-labor” Democratic pols up on the platform – but the March 15 rally may have set a new record, as a seemingly endless assemblage of candidates for mayor and city council used it as a photo op and to test out their stump speeches on a captive audience. Reliance on capitalist politicians – instead of the militant mass mobilization of workers power – has brought defeat to all too many strikes and labor struggles.

Of course, capitalist politicians don’t like it when workers go against the bosses’ rules – even less so when their own party is in the White House, as is the case with Joe “Mass Incarceration” Biden today. That’s why they have their Taylor and Taft-Hartley laws, their NLRB regulations, their racist cops, courts, prisons and all the rest of it. As revolutionary Marxists, we call to break from the Democrats and all capitalist parties and politicians, and to build a class-struggle workers party to fight for a workers government. Then, like the rest of the wealth coined from the labor of the workers and oppressed, Columbia U. will be expropriated and put at the service of the needs of all, as part of a socialist revolution here and around the world.

Solidarity from CUNY to the GWC – All out to win – Victory to the strike!  ■

Today, as the Columbia graduate workers union (GWC) is carrying out its strike, the New York University graduate employees union (GSOC) says it too may go on strike soon, if the NYU bosses – whose arrogance rivals that of Columbia’s – keep stonewalling. Like the GWC at Columbia, GSOC at NYU is part of United Auto Workers Local 2110.

Since our inception in the campaign to stop the City University of New York’s “anti-immigrant war purge” in 2001, the CUNY Internationalist Clubs have helped bring out solidarity from students and adjuncts with struggles by sectors of city labor, notably immigrant restaurant, warehouse and laundry workers such as those the Liox/Wash Supply company fired this February for organizing a union. This has also included supporting organizing drives and strikes at a range of different universities. We believe some of these struggles have important lessons for today. Among them is the important grad student strike that UAW 2110/GSOC led at NYU from November 2005 through May 2006. Today at Columbia, strikers chant, “What do we want? A contract! When do we want it? Now! If we don’t get it, SHUT IT DOWN!” Key, then and now, is to put that into practice.

The 2005-06 NYU grad students’ strike was launched with enthusiasm and determination. Yet, backed by the National Labor Relations Board’s viciously anti-labor Brown ruling, the hardline NYU administration let GSOC’s contract expire, refused to negotiate a new one – and wound up dealing the strikers a bitter defeat. Nine years went by before GSOC-UAW finally succeeded in negotiating a new contract. In 2016, the Brown decision was reversed; while this can lessen some legal obstacles to organizing, it remains crucial for labor to rely on its own power. Since the ruling class can go quite a while without college papers being graded (whereas a transport strike, for example, can shut things down tight in a day), bringing in active support from other sectors – and large numbers of students – is doubly important.

Key issues in the November 2005 UAW 2110 strike at NYU were addressed by the CUNY Internationalist Clubs in a leaflet issued at that time, advocating that CUNY join NYU on strike. Many of the issues posed then have continued to come up, again and again, in struggles by grad students, adjuncts and others across the country – and are posed today in the fight to win the current GWC-UAW strike at Columbia. Below is an excerpt from our November 2005 leaflet “NYU & CUNY: Strike to Win.”

“The potential to win is shown by the willingness of many unionized truck drivers to stop deliveries rather than cross the picket lines. New York is a union town, and labor could mobilize thousands to shut the campus down in an instant. Yet the labor tops have limited themselves to the ritual [speechifying and grandstanding].

“[The university’s] employees are divided into various separate unions whose leaders negotiate separate expiration dates and have kept operations going during this strike. Maintenance, supply, elevator repair, garbage disposal and all the other plant work goes on. AFT Local 3882, representing clerical workers, just signed a contract, with a clause against sympathy strikes. Most absurd and self-defeating is the existence of a separate union for NYU adjuncts, UAW Local 7902, which operates out of the same office as striking UAW 2110 – but continues to work during the strike!

“During the 2003 Yale University strike, clerical and other workers mobilized en masse, shut down streets, paralyzed crucial work, and beat back a haughty, aggressive administration. Members of the Yale workers’ union have repeatedly come to the NYU picket lines to show their support. In contrast, the recent (2004 and 2005) Columbia University graduate assistant strikes were lost: UAW 2110 struck but the union tops had clerical and other workers, often members of the same union, continue to work. [This is the case in today’s strike as well.]

“The concept of dividing the workforce into separate unions (craft unionism) was overcome in auto, steel, transport and other strategic industries in the 1930s’ battles to build ‘industrial unions.’ On college campuses seven decades later, splitting workers up this way just plays into the administration’s divide-and-conquer strategy.

“Fighting to win the current NYU strike would help open the way to unite everyone into a single union of all university employees. This should include the professors, who don’t have their own NYU union and in most cases continue to teach; it clearly must not include administrators, campus cops and other enforcers for the employer.”