Cops Off the Trains and
Out of the Stations! Hundreds protesting cop brutality marched through Harlem in the face of an army of police constantly blocking streets and arresting demonstrators.   (Photo: Gothamist)

UPDATE: On Friday, November 22, a second “emergency action” march against NYPD brutality was called, this time in Harlem. Some 1,000 demonstrators took off from the Adam Clayton Powell state office building on 125th Street surrounded by hundreds of police. The Revolutionary Internationalist Youth chant of “Only revolution can bring justice” was picked up by many in the crowd. Cops frequently blocked streets, forcing the march to turn, and in the end ploughed into demonstrators using their bikes as battering rams. In total, 57 people were arrested as the police besieged the heavily black and Latino march. The RIY demands that everyone arrested be immediately released, and all charges be dropped!

Over 1,500 people protested on November 1 in downtown Brooklyn against a wave of racist police brutality in the subways. Protesters marched through the streets and blocked major intersections along Atlantic Avenue and Fulton Street, chanting “being broke is not a crime” and “What’s our mission? Abolition.” The Revolutionary Internationalist Youth joined in. The RIY calls for cops out of the subways, and to rip out the turnstiles – for free mass transit, run by the transit workers rather than the real estate speculators and Democratic Party pols who control the system today, and have been running it into the ground for decades.

The outrage against the armed fist of the state was in response to two widely viewed videos of assaults on black people by police. On October 25 a video emerged showing 19-year-old Adrian Napier sitting on a train, hands up, as passengers scattered to the ends of the car to get out range of the cops, whose guns were pointing through the windows from outside the car. Seconds before the doors open, Napier is heard calling out to other passengers to “call my mom,” terrified that these may be his last moments. As the doors open, police storm the car and viciously drag Napier to the ground. Roughly a dozen cops, some with guns still drawn, pile onto the young man and proceed to cuff him. His “crime”? Not having $2.75 for subway fare.

The next day a second video went viral of a rabid gang of cops punching black youth in the Jay St. Metrotech station, as if in a drunken pub brawl. Lawyers with Brooklyn Defender Services revealed that one of the cops had been involved in a prior arrest in which he tore a one-year-old child from his mother’s arms and brandished a taser against a crowed of outraged onlookers. Two weeks later, yet another video surfaced showing police arresting a woman at the Broadway Junction station for selling churros. The woman was crying as she was taken away in handcuffs and her cart confiscated. RIY chants of "Only revolution can bring justice" and "Eric Garner, Michael Brown, shut the whole system down" were picked up by many in the crowd during November 22 march through Harlem. (Internationalist photo)

These wanton attacks occur in the context of a recent spike in fatal shootings by the killer cops of the New York Police Department (NYPD). Six people have been killed by police in the past month and eleven in total since the beginning of the year. (The trigger-happy lawmen even killed two of their own in “friendly” fire.) At the November 1 protest, an Internationalist Group sign declared: “We Remember Allan Feliz, Antonio Williams, Victor Hernandez – Victims of NYPD Terror.” This escalation of police terror is a direct result of so-called “broken windows” policing, championed by former mayors Bloomberg and Giuliani and continued by de Blasio, of massively arresting African American and Latino youth for petty “crimes.”

In response to the video of Napier being manhandled by NYPD thugs, seen by over 3 million viewers, de Blasio defended the cops’ brutal action, saying that someone had identified him “as someone they saw with a gun.” But Napier did not have a gun, so they charged him with fare evasion for jumping the turnstile trying to escape from the pistol-brandishing police gang. He was another black man in the wrong place at the wrong time in racist U.S.A. As for the woman selling churros, de Blasio declared “she shouldn’t have been there” and that “the officers comported themselves properly” (New York Times, 11 November). Police carried out 58 arrests on November 22. RIY demands: free them all, drop the charges. (Photo: Gothamist)

The terror on the subways comes months after Democratic governor Andrew Cuomo’s agreement with the Metropolitan Transit Authority and Democratic mayor Bill de Blasio to flood the trains, stations and buses with an additional 500 uniformed cops in a so-called “quality of life” bid to stop “fare beaters.” Are they also targeting high cholesterol from churros?!

This police crackdown is racist to the core – and it is massive. According to nyc.gov, in the three months from April to June of this year, 15,820 summonses were issued for fare evasion; 71% were to African Americans and Latinos, who were also hit with 86% of the 682 arrests in the same period for the same non-crime. Likewise, the recent targeting of subway vendors is especially menacing to Latina women and black youth, some of whom are only children.

Cuomo and the MTA have tried to justify the heavy cop presence by citing an increase in crime and assaults on transit workers. But even the NYPD chief called Cuomo’s bluff, labeling it “a total mischaracterization” (AM New York, 31 October). From the beginning, when the plan was announced, de Blasio threw his weight behind it, declaring “the additional officers we’re deploying to the subway system will protect riders, prevent fare evasion and respond in emergencies,” while adding that transit workers “need more protection.” But neither Cuomo nor de Blasio give a damn about worker safety. This is all about racist terror.

While Bloomberg was in office, “broken windows” also meant “stop-and-frisk” – the NYPD practice of racially profiling African American and Latino men for unconstitutional searches. The policy was begun under Giuliani by NYPD commissioner William Bratton, who was then brought back as top cop by de Blasio. The ostensible aim was to “get guns off the street,” but the real purpose of stop-and-frisk was to terrorize the non-white majority of the population. In 2011, the stops peaked at 685,724 (see “Thousands Protest Racist ‘Stop and Frisk’,” The Internationalist, Summer 2012). In the 12 years of Bloomberg’s three terms as mayor, there were over 5 million stops, 90% of black and Latino men, the vast majority innocent of any crime.

Now that he is making a bid for the Democratic presidential nomination, having again switched parties after his stint as Republican mayor, billionaire Bloomberg is shedding crocodile tears over his stop-and-frisk “mistake.” Five million stops is no mistake! And as the pro-police stance of de Blasio and Cuomo over the cop terror in the subways underscores, both parties are racist to their core, upholding American capitalism, which since slavery days has been built on oppression of black people. As we repeatedly pointed out, in major cities across the country, it is Democratic mayors who give the orders to the racist killer cops.

The multiracial crowd of protestors at the November 1 rally correctly denounced the police as racist, but organizers tried to channel the outrage into the dead-end of fashionable “identity politics.” They grotesquely attempted to segregate the crowd by ordering white demonstrators to the back and sides of the march and having black protestors move up front. Fortunately, very few complied with that Jim Crow edict. Not only would this have exposed black activists even more directly to the wrath of the police, such ploys reinforce the divisions fostered by the ruling class to prevent the mobilization of the power of the multiethnic working class in struggle against black oppression. 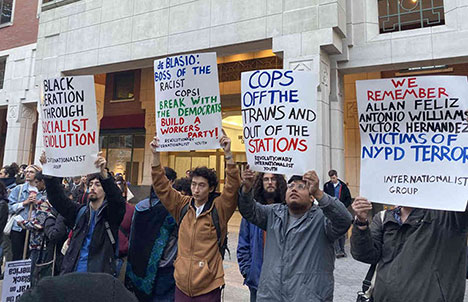 Without a political fight against U.S. capitalism’s dual parties of imperialist war and racist repression, nothing will change. The job of the police is to defend the interests of the exploiters and oppressors against those they exploit and oppress. Breaking the chains that bind working people and the oppressed to the Democratic Party requires a program of political independence from the racist capitalist rulers that points the way to international socialist revolution. The social force that has the power to head up that fight is the working class that makes the cities run, and can bring this citadel of finance capital to a grinding halt. But that requires a fighting leadership.

On October 30, just days before the demonstration against cop terror in the subways, thousands of members of Transport Workers Local 100 gave a taste of their power as they rallied outside MTA headquarters, where management has been stonewalling contract negotiations with the union. Transit workers are fed up with the bosses on the MTA board, most of whom are appointed by Democrat Cuomo, and many said they are ready to strike. Yet the union leaders are in Cuomo’s pocket, backing him at election time and looking to the governor to bail them out.

Local 100 is the stronghold of NYC labor, and if transit workers’ anger were to intersect with the campaign against cop terror in the stations, it would produce an explosive social struggle that would rock the city. The fight against racist police attacks in mass transit and on the streets of the U.S. must be waged politically. Behind each blow inflicted by the enforcers of capitalist “law and order” are the dictates of Wall Street. Only by breaking with the Democrats, forging a class-struggle workers party and organizing on a revolutionary class program can working people and the oppressed fight to win.  ■