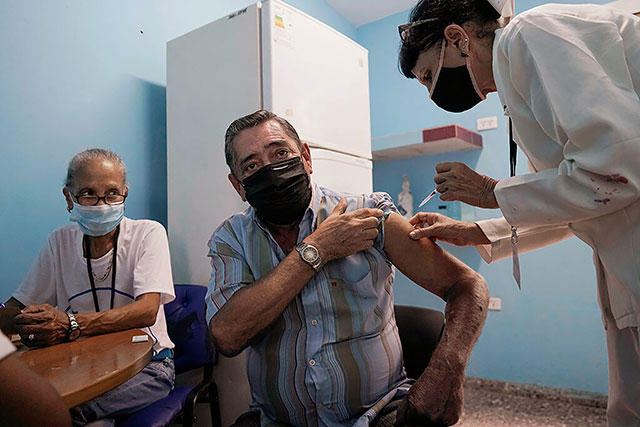 Administering COVID-19 vaccine in Cuba in June. Cuba has developed five different vaccines against the virus, two of them proven over 90% effective, and the Cuban government is distributing them free to the population.
(Photo: Alexandre Meneghini / AP)

On July 22, Cuban scientist Pedro Valdés-Sosa, whose work is closely linked with the health and medical fields in Cuba and internationally, shared some of his views and observations about recent events and the current situation. Below (reproduced from a friend’s Facebook page) is some of what he wrote.

Protests are due to some people being angry about the economy. The situation is dire since it is strangled by increased Trump measures not moved a bit by Biden. Also, delays in some reforms haven’t helped. On top of that, anger due to COVID restrictions that are very necessary but painful. Understandable. Many protesters were pacific, but some turned violent and started looting and destroying cars. It seems like they are fighting for “democracy.” Even physical violence against the people supporting the government.

There have been protests of this sort in every country. As usual for Cuba, the information is being blown out of proportion by a veritable US media frenzy. This frenzy has even resuscitated the mythical “Havana Syndrome.”

The U.S. is pouring money into the anti-government people, paying for the internet and adverse social media reports.

There were countermarches (peaceful) with hundreds of times more people, not reported.... Nothing was reported in the U.S., though a bit in Europe.

Things are very calm now, but it is to be expected that there might be more problems. The whole thing is an apparent attempt by the Western powers at regime change.

Cuba is being accused of many things. Many of them by Biden, let’s take them one by one and fact check them by asking questions.

– Who will distribute these vaccines since all medicine is public?

– What of the thousands of Cuban scientists, medics, nurses that not only have bravely fought against the pandemic but also help 72 other countries?

– What of the determined efforts of the US to embargo spare parts for ventilators and products for our pharmaceutical industry? – What of the 5 Cuban vaccines for COVID, two that are more than 90% effective and are distributed for free by the Cuban government? In a country with better vaccination history and less hesitancy than the U.S.? Vaccines that could contribute to world health and diminish the vast reservoir of unvaccinated people that produces variants? But then harming the dollar input to the big U.S. pharmaceuticals is undoubtedly a crime against democracy?

Dr. Valdés-Sosa went on to describe the effects of the intensified U.S. embargo on crucial efforts he and his colleagues have been carrying out in the midst of the pandemic.

We were denied access to repair parts or to buy ventilators since the companies we approached were U.S.-owned.... [The institute] has reconverted its production facilities to produce hundreds of our own designed ventilators for the ICUs. Our young people are going to the epicenters of the epidemic to install these ventilators. This production is to respond to the increasing number of cases due to the new COVID variants.

At every step, we were blocked by the U.S. government. One example is a crowdfunding effort carried out in the UK that we were told it was against U.S. directives to give to the institute. ■

See also: U.S. Blockade of Cuba: “Bring About Hunger, Desperation, Overthrow”
The Truth About Cuba Protests – Defend the Revolution Against U.S. Imperialism and Its Frontmen