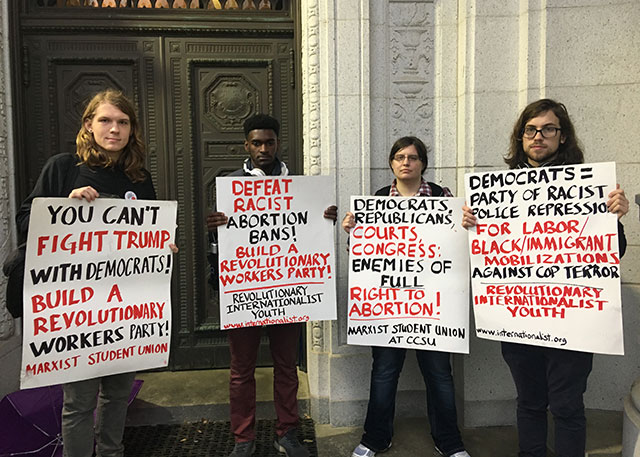 For Free Abortion on Demand! Labor: Defend the Clinics!

In a frenzied move to roll back women’s rights by several decades, so far in 2019 nine states have passed new, draconian restrictions on abortion rights. Alabama leads the way with an almost complete ban. Georgia, Kentucky, Louisiana, Mississippi, and Ohio come in a close second with their “fetal heartbeat” laws, banning abortions at six weeks, before many women know that they are pregnant. Missouri follows with a ban on abortions after eight weeks, while Arkansas and Utah have enacted new restrictions on abortion after 18 weeks.

Any restriction on a woman’s right to an abortion is an infringement on her basic right to control her own body, and these laws frequently don’t even include exceptions for victims of rape or incest. Some of them don’t even have exceptions to preserve the health of the mother. The supposed basis for the anti-abortion laws pushed by the “pro-life” bigots is the anti-materialist, religious doctrine that a fetus is a person, an “unborn child.” In fact, these new restrictions have absolutely nothing to do with a moral reverence for “life”, but rather display a pathological disregard for the well-being of women. Particularly poor and working-class women, because the availability of abortion is also a class question

The new abortion bans and intensified drive to force women back into the dark ages before abortion was legal center on Republican “red states.” They are intended to get the U.S. Supreme Court with its reinforced anti-abortion majority to rule on laws that gut the 1973 Roe v. Wade decision declaring abortion a woman’s right. But even in predominantly Democratic “blue states” that have recently expanded access to abortion, the laws often come with restrictions. In New York, the 1970 law making obtaining or performing an abortion after 24 weeks a felony (except to save the life of the woman) was repealed. Importantly, the law defines a person as a “human being who has been born and is alive.” But the new standard only allows third trimester abortion in cases where the fetus isn’t viable or the life or health of the patient is at risk.

So a pregnant teenager who decides late in the game, perhaps after resisting weeks of pressure from parents, church, boyfriend or spouse, that she just isn’t ready to be a mother – that she wants to continue her education, or embark on a career, or whatever – is out of luck, She will be forced to give birth to an unwanted child, unless she can find a medical professional to determine that it is necessary to preserve her mental health. And what would be considered proof? An attempted suicide perhaps?

In Rhode Island, similar restrictions exist and physicians are required to document the medical reasons for an abortion performed after 24 weeks or face loss of their medical license. In Maine, new legislation requires insurance companies to cover abortion, but there is a religious exemption.

As Marxists and defenders of women’s rights, we have a fundamentally different standard. We say that the decision to give birth or not must be that of the woman alone, because it is her life and her future that will be irrevocably altered. The Internationalist Group calls for free abortion on demand. We also stand for militant defense of abortion clinics, including against “pro-life” terrorists who target the courageous doctors and nurses who perform this vital medical procedure. And we fight in the unions to defend this elemental right of women.

The anti-abortion “god squads” who besiege the clinics really don’t give a damn about so-called “sanctity of life”. Rather, they are obsessed with putting women in their place. “Keep ’em barefoot and pregnant, and in the kitchen,” summed up such traditional views of women’s role. Like the Nazis who took over from German conservatives the motto that women should be confined to “Kinder, Küche, Kirche” (children, kitchen, church). In this misogynist (woman-hating) view, women are destined to be baby factories and domestic servants. Ultimately, women’s oppression is rooted in the nuclear family, the primary social unit of capitalist society.

There is another important social underpinning to the anti-abortion drive. The Internationalist Group has called to defeat the racist abortion bans. The history of white supremacist laws and actions to forcibly sterilize black women is notorious. And it’s hard to miss that “pro-life” capitalist politicians, who have nothing to offer on maternal mortality rates or child poverty, furiously denounce Black Lives Matter protests against racist cop killings of African Americans and fulsomely support the legalized lynching known as the death penalty.

What is less often talked about in polite society is how the push to illegalize abortion (and contraception, once they get going) is driven by racist fears that white women are not producing enough white babies. This theme is spouted in its crudest form by the Nazi fascists who variously chant “Jews will not replace us” and “they will not replace us.” This “white replacement” myth is spread by anti-Muslim racists in Europe and was echoed by the Christchurch, New Zealand mass murderer who slaughtered 50 people at a mosque this past March.

But this theme has currency even in “respectable” bourgeois circles. The bible of the “family values” anti-abortion forces is the 1989 book by Ben Wattenberg, The Birth Dearth, which bemoaned the fact that, due to the availability of abortion and “the pill,” fertility rates among white women were falling below the 2.1 children per woman “replacement level.” Wattenberg, a “neoconservative” fellow at the American Enterprise Institute, complained in 2004 that “60 percent of aborted fetuses are white and if we could lower that number by even half, we could prevent the decline of the white race.” This racist garbage came from someone who had a regular talk show on liberal PBS public TV.

Today, the Democratic Party is seeking to use the abortion bans in order to win women’s votes in the 2020 elections. But, in fact, the Democrats are no defenders of women’s fundamental right to abortion. Wattenberg was a former speech writer for liberal Democrats Hubert Humphrey and Washington senator Henry Jackson. Both were rabid anti-communists, and Wattenberg was close to the Social Democrats U.S.A. who later populated the Reagan administration. The current presidential frontrunner Joe Biden supported Democratic president Jimmy Carter’s Hyde amendment banning Medicaid funds for abortions for poor women; said that Roe v. Wade “went too far” in legalizing abortion; and has called to “ban all post-viability abortions.”

But even more telling is the record of feminist Democrats like Hillary Clinton. In the 1990s, when husband Bill was campaigning for the presidency, she declared that abortions should be “safe, legal, and rare.” But when she was preparing to run for president herself in 2006, she sought “common ground” with “right-to-life” reactionaries, saying that abortion is a “tragic choice” that “either does not ever have to be exercised or only in very rare circumstances.” Did you catch the “not ever”?

While anti-abortion zealots compete for first prize in callous disregard for women’s lives, so-called allies in the Democratic Party simply abstain rather than putting up a fight. In the Alabama House of Representatives, Democrats chose to walk out rather than voting. In Louisiana, which recently passed a “six-week ban” with no exceptions for rape or incest, the bill was authored and signed by Democratic Governor John Bel Edwards. So much for the Democrats’ “resistance.”

Today in Alabama, doctors who perform an abortion can be sentenced to up to 99 years in prison for performing an abortion. In Georgia, once the law goes into effect next January, a woman can be charged with murder for terminating a pregnancy. Even in cases where the patients themselves are not charged with a crime, they can be called as witnesses against their providers. In addition to the harsh new penalties, there is also a web of existing TRAP laws (targeted regulation of abortion providers), designed to make operating a clinic prohibitively expensive, and creating a complicated labyrinth of bureaucracy for obtaining an abortion.

With the lives of women hanging in the balance, and the so called “resistance” capitulating to bigoted moralism, to go forward in the battle for abortion rights and women’s liberation requires a class fight. As long as unions remain tied to the Democratic Party, with their half-hearted, weak-willed or outright hostile approach to abortion rights, labor will be unable to fight for the half of the working class that suffers the special oppression of being a woman worker. There have been some small mobilizations on the part of workers to defend clinics and oppose attacks on abortion rights, such as the January 2016 picket initiated by Class Struggle Workers – Portland against a youth “right-to-life” rally. But this is only a small example of what is needed. Class-conscious workers must uncompromisingly fight to defend and advance abortion rights. Without mobilizing the might of the working class, led by an international revolutionary workers party, the liberation of women from their roles as cheap labor and incubators for the ruling class is impossible. ■