Drive U.S./NATO Imperialists Out of the Middle East!

Democrat Sanders Aboard the
“War on Terror” Bandwagon 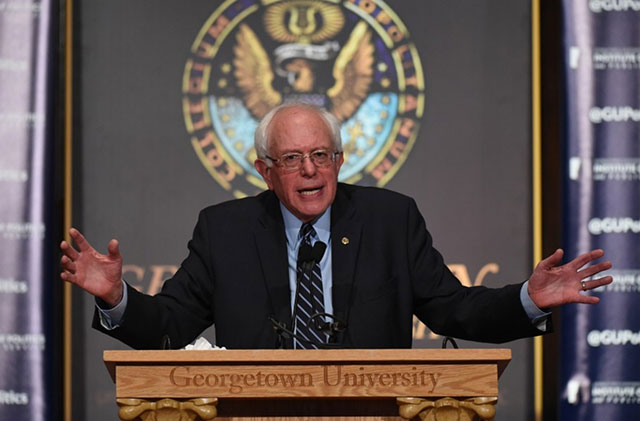 In October 3 statement, Democratic presidential candidate declared, “I support President Obama’s effort to combat the Islamic State in Syria.”  In November 19 Georgetown University speech (above), Sanders called for imperialist alliance to “combat the global threat of terror.” But U.S. imperialism is the most murderous terrorist force on the planet, far deadlier than the reactionary Islamist cutthroats of the I.S. (Jonathan Newton / The Washington Post)

Following the November 13 Paris attack and the December 2 rampage in San Bernardino, California, both claimed by the Islamic State (I.S., also known as ISIS), the Western world seems engulfed in an anti-terrorist frenzy. France’s “Socialist” president François Hollande declares a perpetual state of emergency as police kick in doors in immigrant neighborhoods while the fascist National Front surges ahead in regional elections. In the United States, the presidential election campaign has become an orgy of xenophobia and militarism. As Donald Trump calls to ban all Muslim immigrants, his Republican rivals and governors present soft-core versions of the same (“no Syrian refugees in my state,” they say). Meanwhile, Democrats debate how to escalate U.S. imperialist war in the Middle East, whether “no fly zones,” U.S. troops or outsourcing the ground war to “moderate” jihadis in Syria and the Saudi and other Arabian monarchists who have bankrolled and armed all the Islamist gangs.

Amid the “security” hysteria, the “mainstream” (i.e., big business) media are beginning the process of writing off Democratic contender Bernard Sanders as an “outlier.” For quite a while, the Vermont senator, who describes himself as a “democratic socialist,” enjoyed good press in order to keep interest alive in the Democratic Party “contest.” Hillary Clinton had that sewn up long ago in the real primaries, the fund-raising race, where she far outpaces Sanders, mainly due to big money, the heavy hitters on Wall Street and in Hollywood. Now it’s time to send a message to the voters, so the populist challenger is portrayed as “soft on terrorism.” In an article on the latest Democratic debate, the New York Times (20 December) wrote of Sanders:

“His progressive political message, so popular with liberals for much of 2015, now seems lost in a fog of fear. Americans are more anxious about terrorism than income inequality. They want the government to target the Islamic State more than Wall Street executives and health insurers. All of this plays to Mrs. Clinton’s strengths – not only as a hawkish former secretary of state but also as a savvy politician who follows the public mood.”

But for all the pundits’ supposed expertise on what “Americans” think, based on polls which reflect media-manufactured “public opinion,” Sanders is fully on board the imperialist “war on terror” bandwagon.

Hillary Clinton is indeed a certified war hawk, her hands dripping with blood, from Iraq to Libya and Syria. She is certainly the candidate most likely to escalate the U.S. war in the Middle East to a region-wide and even world war, far more dangerous than a Donald Trump. Sanders’ supposed “antiwar” credentials, however, are solely based on voting against the U.S. war on Iraq as a “blunder,” akin to Obama’s opposition to George W. Bush’s “dumb war” (which hasn’t stopped him from launching “dumb and dumber” wars once in office). In fact, Sanders has a long history of supporting U.S. imperialist wars, and Zionist Israel’s invasion of Gaza.1 As Hillary Clinton pointed out in the December 19 debate, this self-proclaimed “democratic socialist” voted for the U.S. war in Afghanistan, and despite his criticism of Clinton’s predilection as secretary of state for “regime change,” notably in Libya, he also voted for military action to oust Libyan strongman Muammar Qaddafi.

Trade unionists march in 2010 against Obama’s drone strikes that have killed thousands in Pakistan. Bernie Sanders says he will continue to use drones . (Rehan Khan / EPA)

In a November 19 policy speech on “Democratic Socialism and Foreign Policy” at Georgetown University, Sanders emphatically declared that “the United States must pursue policies to destroy the brutal and barbaric ISIS regime” and to “prevent fanatical extremist ideologies from flourishing.” He cited as a model the North Atlantic Treaty Organization (NATO), supposedly founded “in response to the fear of Soviet aggression,” as a “collective defense against a common enemy.” He said, “We must create a new organization like NATO” to “combat the global threat of terror.” But NATO was in fact the spearhead of the anti-Soviet Cold War, and by “we” he means U.S. imperialism, which is far and away the most brutal, barbaric, murderous terrorist regime on the face of the planet. Sanders has been a Cold Warrior since his student days in the virulently anti-Communist Young People’s Socialist League (YPSL). As internationalist communists we fight to smash imperialism by international socialist revolution.

Sanders supports Obama’s policies in the Middle East. He won’t rule out using drones. Like Clinton, he wants to oust Syrian leader Bashar al-Assad, just later. He calls for an international coalition against the Islamic State, but with the fighting done “primarily by Muslim nations,” including Saudi Arabia, Kuwait, Qatar, the UAE and his favorite, King Abdullah of Jordan. Yet Abdullah is a puppet of the Israelis to keep the Palestinians caged, and the oil-rich Arabian monarchies are extreme Islamist regimes which along with Erdoğan’s supposedly “moderate” Islamist government in Turkey have been financing and arming all of the jihadi gangs in Syria, including the I.S. Unlike the capitalist Democrat Sanders, who uses slightly social-democratic rhetoric to disguise his imperialist politics, revolutionary socialists would seek to overthrow all these Sunni autocrats who lord it over a population of downtrodden Shiites and foreign-born workers without rights, and to eradicate the sectarian militias they back in Syria. While Sanders supports Obama’s bombing war, Trotskyists call for working-class action to drive the U.S. and NATO from the Middle East, understanding that all real blows against the imperialist aggressor forces (even by reactionaries such as the Sunni I.S. or Iraqi Shiite militias) are in the interests of the workers and oppressed, and siding with Syria and Russian forces against U.S./NATO attack.

In the first Democratic debate in October, when questioned about calling himself a “democratic socialist,” Sanders responded that the U.S. “should look to countries like Denmark, like Sweden and Norway” as an example. In particular, he is taken with Denmark, inviting the Danish ambassador to a speaking tour of Vermont and writing an article extolling the virtues of its free health care and education, guaranteed income, parental leave and high trade-union membership. Sanders’ praise drew a complaint from Prime Minister Lars Løkke Rasmussen of Denmark’s Liberal Party that his country is “far from a socialist planned economy” but rather a “market economy.” In fact, the governing “center-right” coalition rests on the support of the virulently anti-immigrant Danish People’s Party (DFP). The so-called Nordic “welfare state” (or “social state”), erected under social-democratic governments, is nothing but capitalism with some more social programs, many of them now being whittled down.

In the Danish case in particular, this is combined with aggressive imperialist military policies abroad. Danish tanks participated in the 1994 war against Bosnian Serbs, Danish F-16s bombed Serbia in the 1999 U.S./NATO war, hundreds of Danish troops participated in the invasion and occupation of Iraq from 2003 to 2007, Danish warplanes played an outsize role in the NATO assault on Libya in 2011, and former Danish prime minister Anders Fogh Rasmussen was head of NATO from 2009 to 2014. Denmark was part of the U.S./NATO occupation of Afghanistan from start to finish, from late 2001 until it was formally ended in December 2014. A documentary film, Armadillo (2011), shows hostile Afghan villagers, children chanting “Go home!” at Danish soldiers on patrol and Danish soldiers executing wounded Taliban prisoners. In September 2014, the Social Democratic-led Danish government sent a squadron of jets and 250 military personnel to participate in the war against the I.S. in Iraq.

In Denmark itself the welfare state for citizens has been accompanied by harsh restrictions on immigration, and the rise of anti-immigrant racism. In 2006, the furor over anti-Muslim cartoons in a Danish provincial paper sent shock waves around the Middle East.2 Earlier this year, the Social Democratic government tried to cut back on refugees from Syria by limiting residence for those fleeing wars to one year. The anti-immigrant backlash brought a right-wing coalition into office that has slashed social benefits for refugees by 50 percent and imposed a year’s wait for family reunification. The government even placed ads in Lebanese papers saying how bad it was to immigrants. When that wasn’t enough, it stopped trains at the German border to pull refugees off. Now the Danish parliament is debating a bill to seize refugees’ cash and valuables, including jewelry (only excepting wedding rings!). No wonder “Refugees are fleeing Denmark, a Scandinavian ‘wonderland,’ en masse” (Washington Post, 11 September). 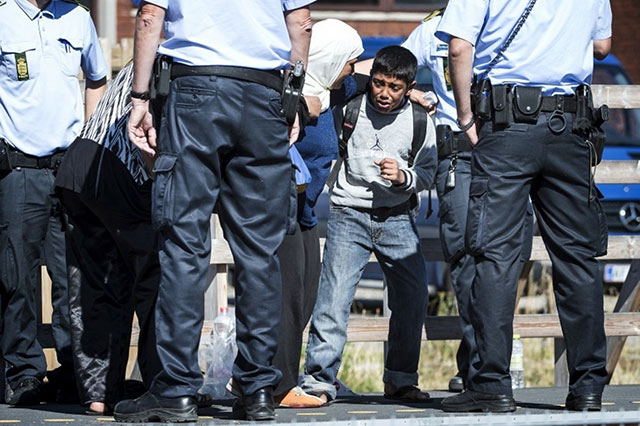 So we have rampant anti-immigrant racism, aggressive imperialist militarism and “welfare state” capitalism governed by right-wing parties in a small country that (like Sanders’ Vermont) is largely ethnically homogeneous – hardly a “democratic socialist” model for the U.S. What Bernie Sanders is campaigning for in 2016 has even less to do with any notion of socialism, however devalued. We’re not the only ones who’ve noticed. In an October 25 PBS interview with Charlie Rose, challenged about what was “socialist” about his program, Sanders responded:

Only in the fevered imaginations of Tea Party reactionaries, Ayn Rand fanatics and Wall Street moguls does any of this have anything to do with socialism. When Sanders went on to rebuilding the crumbling infrastructure, roads, rivers, etc., Rose responded, “That doesn’t require you to be a socialist” and said “I’m the first person trying to argue you away from the idea that you’re a socialist.” Later Sanders told another talk show host, Stephen Colbert, that he prefers the label “progressive.”

In his Georgetown University speech Sanders ran through a list of the programs ascribed to Franklin D. Roosevelt in the 1930s – social security, unemployment insurance, abolition of child labor, collective bargaining, banking regulation, jobs programs ,and concluded saying, “Almost everything he proposed, almost every program, every idea he introduced was called socialist.” Whereupon he winks, and the audience applauds. With a wink and a nod, “democratic socialist” Sanders is a New Deal Democrat. To disappointed liberals who lament the rightward drift of the Democratic Party that might sound like a “political revolution,” but Roosevelt’s entire program was intended to save capitalism from revolution … and to co-opt the left. While labor struggles spread, the social-democratic and Stalinist reformists quickly fell into line with FDR liberalism. Did that end poverty, provide security and “economic freedom” for the masses and put people back to work? It did not. It was the imperialist World War II that finally ended the Depression.

Any supporter of Bernie Sanders who seriously thinks he could win the nomination has a deep misunderstanding of the nature of the Democratic Party. It’s not that Sanders is in any way a threat to American capitalism. On the contrary, he is doing his very best to keep social discontent, of which there is plenty, corralled within the bourgeois electoral arena and under the thumb of this party beholden to Wall Street and a pillar of U.S. imperialist domination of the world. His job is to lure the disaffected back into the Democratic fold, to “sheepdog for the Democrats” rounding up strays. Vote for “Bernie” and you will get “Hillary” and the “Global War on Terror” (GWOT), which he also supports. Revolutionary Marxists and class-conscious working people must oppose Democrats, Republicans and all capitalist parties in order to defeat imperialist aggression in the Middle East, and to build a revolutionary workers party to lead international socialist revolution.■