On Rejecting Anarchism and Joining RIY 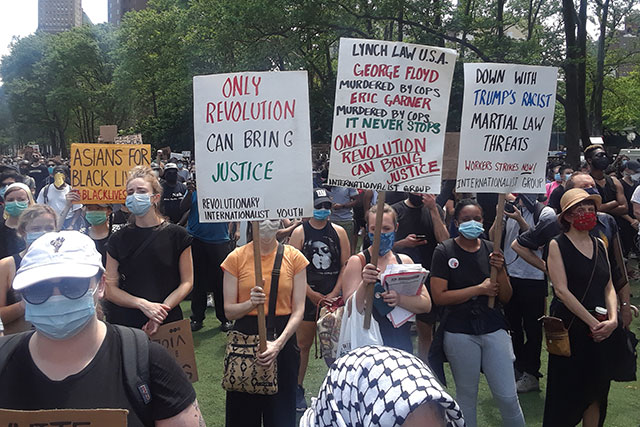 Last summer’s protests against the racist police murder of George Floyd drew millions into the streets, many of them young people getting involved in politics for the first time. In a period where that mass outrage and desire for change were being channeled into the Democratic Party, revolutionaries worked to counter reformist illusions and put forward a program for black liberation through socialist revolution. The following lightly edited and excerpted letter of application to the Revolutionary Internationalist Youth from comrade Lola, who joined recently, is an example of how RIY has been winning youth looking for genuine revolutionary politics.

The violent murder of George Floyd on May 25th, 2020 radicalized me and many others to the realities of policing in this country and around the world. I started attending protests and marches that first Friday, and went out almost every night from then on. Although I now understand the liberal attitudes prevalent in these protests, those first two weeks radicalized me in a way that nothing else really could. Multiple physical clashes were carried out by police, and me and my friends and others were being brutalized with what seemed like endless force. But in the moment, it felt like the only thing we could do.

Weeks went by, we continued marching, but it was starting to feel like the radical energy was being sucked from the movement. Groups started forming and organizing “peaceful” protests, telling us which candidates to vote for in the upcoming election, telling us to use our privilege to call our congresspeople to pass such and such a bill, telling us that if we disagreed with anything they said or did, we were probably racist and needed to check ourselves and our “internalized white supremacy.” Identity politics were the number one rule of these new groups and marches, and it’s taken a lot of work for me to come out of that mindset. But we continued marching, and we continued chanting and hoping that something tangible would come of this.

I was beginning to feel disillusioned with the protests and these groups, but didn’t really feel like there was an outlet for me to voice that. It seemed like everyone else was still very on board with marching for five hours every night over the Brooklyn Bridge and being told to simply vote for Joe Biden at the end of it. I felt as if we were getting nowhere. It was around this time that I was sold my first newspaper by a comrade of the Revolutionary Internationalist Youth (RIY). Some person walks up to me and asks if I want a communist newspaper, and I feel like something has just clicked into place.

I have learned a lot since reading that first paper, and I’ve had to unlearn a lot of things that I fully believed to be fact, things I never thought could ever be disproven. Specifically, learning the history or real meaning behind certain chants was very eye-opening for me. An example would be the extremely popular chant of “No Justice, No Peace.” This feeds into the idea that there can be justice in a capitalist system, which we know is not true. And disrupting traffic on one city block for a few hours does not even register as a blip on the ruling class’s radar.

While trying to figure out where I stood politically, I became close with a number of anarchists, and even organized an action in that line of thinking. Truth be told, I had no idea what I was doing. I was invested in the protests but disillusioned with the structure and stupidity of some of the things I had witnessed from different groups. I felt like I personally had to do something in order to “wake people up.” I think that if I had not met this group (IG/RIY) when I did, I would more than likely have become some sort of anarchist.

The entire point of the action I had “organized” (I created the poster for it) was that there was supposed to be no leaders or organizers and no hierarchy. There was a set route created beforehand, but right off the bat the cops prevented us from following it. They split up the group [of protesters] who couldn’t find or get in contact with each other again. This action was almost a complete waste of time and energy. But it did show me that I wasn’t an anarchist, although I will always appreciate the willingness of anarchists to show up against fascists and the far right. I had to learn that anarchists are extremely liberal in their beliefs and reliance on identity politics, despite their hatred of capitalism. Graffitiing banks will never bring an end to capitalism. Only the international organized revolutionary working class can bring about the end of capitalism.

I think my joining RIY shows that some who don’t agree initially can be won over. I believed in what these organizers were preaching at the time, as I was given no other options, until I was presented with a communist newspaper at exactly the right time. I felt like I was wandering through these different actions and groups, like others who became disillusioned with the norm that had taken hold of the protests of last summer. I know of some anarchists who left their groups because of the constant infighting that would happen, as no one could live up to the “revolutionary” standards of their “idpol”-influenced moral purity, and they were tired of it. I know people are tired of the liberal norm, the same way I was. It’s only a matter of taking the time with them. ■