For a National Strike Against the Murderous Government! 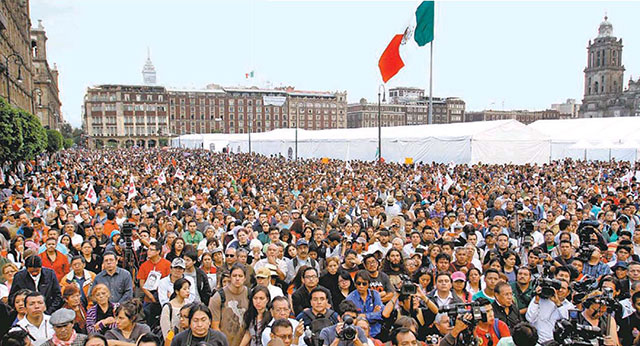 Some 25,000 demonstrators converged on Mexico’s Zócalo (Constitution Plaza) on October 8 to protest the massacre in Iguala, demanding that the disappeared students be brought back alive. (Photo: Héctor Téllez/Milenio)

Over the last week there has been a deluge of outrage throughout Mexico and worldwide at the police murder of six people, including three students of the Ayotzinapa rural teachers college, and the disappearance (and possible execution) of another 43 in Iguala, Guerrero. The grisly news of the discovery on October 4 of human remains of 28 bodies in mass graves near Iguala set off an explosion of  fury against the “gobierno asesino” (murderous government). Parents of the abducted students called for a national mobilization for Wednesday, October 8 to demand that their children “were taken from us alive, and we want them back alive!” The response was massive.

According to media reports, there were protests in at least 63 cities in 27 states of Mexico, from Tijuana in the north to Cancún in the south, where there are seldom demonstrations. In the Guerrero state capital of Chilpancingo, up to 50,000 marched in a giant procession that extended for five kilometers, headed up by relatives, neighbors and students from Ayotzinapa. Signs and banners demanded the ouster of the state governor and the jailing of the fugitive mayor of Iguala, both of the PRD (Party of the Democratic Revolution). Workers of the Autonomous University of Guerrero carried the names of a dozen student activists who were “disappeared” in 1976. 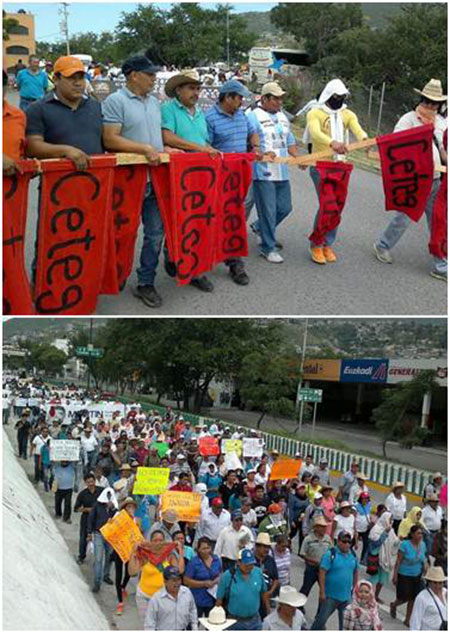 50,000 demonstrated in Chilpancingo, capital of Guerrero, on October 8. Above: militant teachers of the CETEG had a contingent of 6,000 and went on strike across the state. Below: several thousand students, faculty and staff of the Autonomous University of Guerrero marched, some carrying names of activists disappeared in the 1970s. (Photos: El Universal)

Throughout the state of Guerrero, schools were shut down by a strike of the combative teachers unionists of the CETEG, part of the National Coordinating Committee of Education Workers (CNTE). Hundreds of students, teachers and supporters marched in the port of Acapulco, and 3,000 in Tlapa in the Montaña region. In the Costa Chica area where there had been earlier protests, parents of the kidnapped students reported receiving phone threats not to march. In the Federal District, some 25,000 marched, converging on the Zócalo, the huge Constitution Plaza opposite the Presidential Palace in the center of Mexico City.

It was in Oaxaca that the mobilization was strongest. Noticias (9 October) reported that Section 22 of the CNTE teachers “paralyzed the state.” This was no exaggeration. In addition to shutting down schools and classes for 1.3 million students statewide, the teachers blocked access to the Oaxaca airport, blocked shopping centers, blocked the Oaxaca-Mexico superhighway, blocked the bridge to Veracruz, shut down a bottling plant in Tuxtepec, blocked the state attorney general’s offices and a fuel depot of the state oil company Petroleos Mexicanos, and blockaded the Pemex refinery in the Salina Cruz.

As in 2006 when working people of Oaxaca rose up, this all points to the need for a national strike against the murderous government. 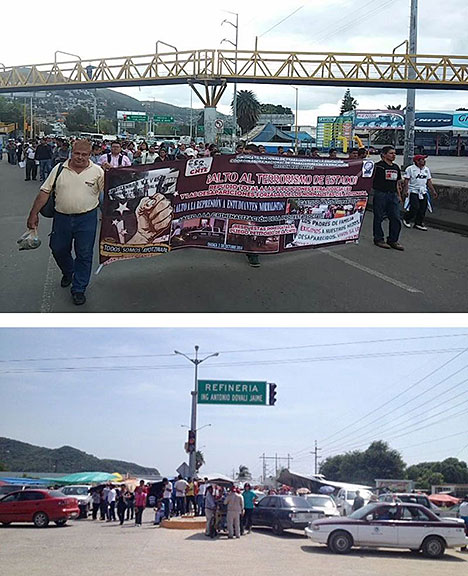 October 8 mobilization was strongest in Oaxaca. Above: militant teachers of Section 22 of the CNTE carry banner calling to stop state terrorism as they block shopping center and access to the airport. Below: Section 22 teachers blockade the Pemex oil refinery at Salina Cruz. (Photos: Quadratin; Diario de Antequera)

The Grupo Internacionalista put out a leaflet proclaiming, “The Massacre in Iguala Demands Workers Mobilization and Revolution!” Some 1,000 copies were distributed in Mexico City, 500 in Oaxaca, 300 in Guadalajara, and in Tijuana a protest called by the GI drew around 50 people. Signs and banners called for a national education strike, for workers self-defense and declared that “Socialist Revolution Will Avenge the Students of Ayotzinapa.” In Mexico City, a spokesman of the Grupo Internacionalista was the final speaker in the Zócalo, reporting on the solidarity demonstration in New York, and leading the crowd in chanting, “Luchar, vencer, obreros al poder!” (Struggle, win, workers to power).

In NYC, the Internationalist Group together with the Internationalist Clubs at the City University of New York and Class Struggle Education Workers organized a boisterous picket outside the Mexican consulate denouncing the Iguala massacre in solidarity with the October 8 protest in Mexico. Three days earlier, a Sunday, October 5 emergency protest initiated by the IG drew several dozen angry activists on a few hours notice after the discovery of the mass graves. Demonstrators chanted “Normalistas mexicanos, estamos con ustedes” (Mexican teachers college students, we are with you), “From Ayotzinapa to Ferguson, one fight” and “Mexican militarization, made in U.S.A.” Photos of the NYC protest were front-page news in Guerrero. 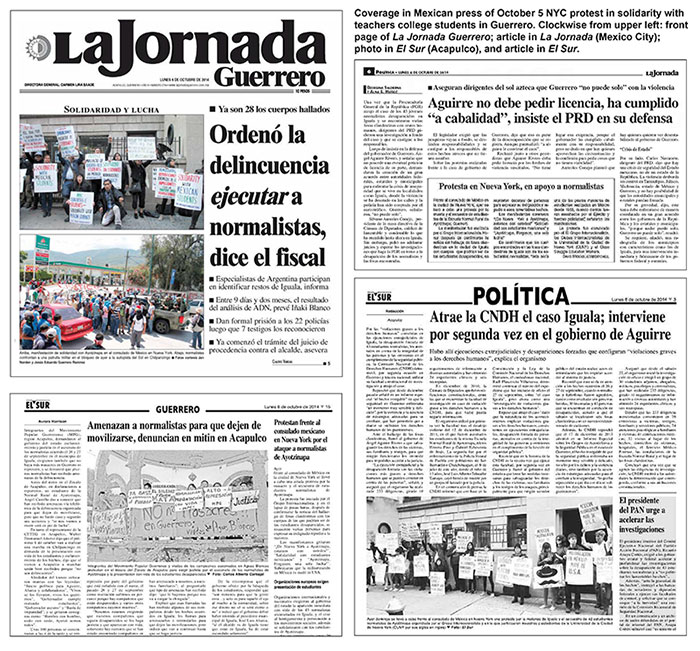 The October 8 picket at the consulate was loud, spirited and considerably larger, growing to more than 100 participants, most staying to the end two hours later. Dozens of Mexican immigrants came out, including some from Guerrero who had been in touch with relatives of the Ayotzinapa students. NY Zapatistas and YoSoy132 New York had a puppet of death with a skull shrouded in black and a sign identifying it as the “narcogovernment.” A number of left groups participated including the Revolutionary Student Coordinating Committee, Freedom Socialist Party (with a sign calling for freedom for Nestora Salgado), International Socialist Organization, Spartacist League and Batay Ouvriye Support Network, all of which addressed the crowd.

Demonstrators chanted angrily at the consulate, “¡México, gobierno asesino!”(Mexico, government of murder). Another chant that was enthusiastically picked up was “PRI, PAN, PRD, bloody parties of the bourgeoisie.” Today the government is trying to pin the blame for the slaughter in Iguala on drug traffickers. Yet while the PRD is overseeing a government of death in Guerrero, President Enrique Peña Nieto of the Institutional Revolutionary Party (PRI) and his predecessor Felipe Calderón of the rightist National Action Party (PAN) have carried out a “war against drugs” and a “war against terror” that has turned Mexico into a giant killing field and mass grave, killing some 100,000 people since 2006. 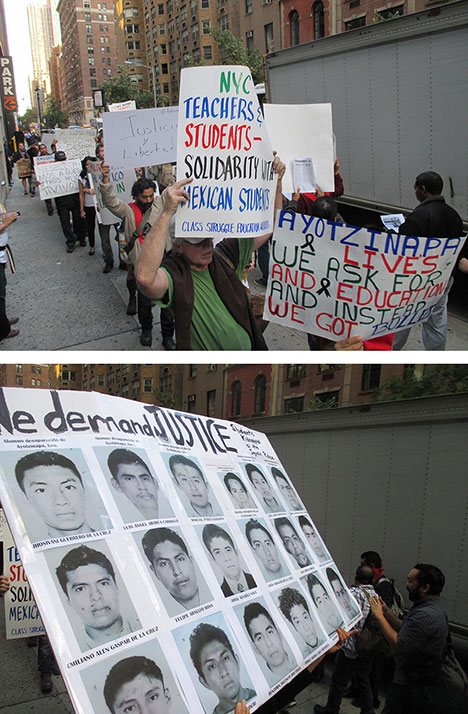 October 8 demonstration outside Mexican Consulate in New York City. Over 100 participated. At the end, the names of the 43 disappeared students were read off and after each one the crowd responded, "¡presente!  (Internationalist photo)

The rally at the end had 16 speakers including members of New York education unions, Professional Staff Congress (CUNY) and United Federation of Teachers, as well as opposition groups (Movement of Rank and File Educators and Class Struggle Education Workers), who emphasized that behind the killings in Iguala is an international offensive against public education that students, educators and parents are fighting in the U.S. as well. An immigrant worker supporter of the IG recalled how a few days ago, we saw police in Brooklyn throw a pregnant woman on the ground in order to intimidate people:

“Back in the time of the kings, they used to make an example of those who fought back against the state by tearing them limb from limb. In Mexico we are seeing the same thing today. They skinned one student alive to be an example so that we don’t rise up in struggle. And that struggle is against the same attacks as we have here on women, on black people.

“We are the ones who produce all the profits of those parasites, everything you see here was built by us, the workers. We make the city move, and we can make it stop. We saw that a few years ago in the strike in the MTA [public transit]. We need to move these armies of proletarians to defeat this murderous and corrupt bourgeoisie. Long live the socialist revolution.¡Luchar, vencer, obreros al poder! 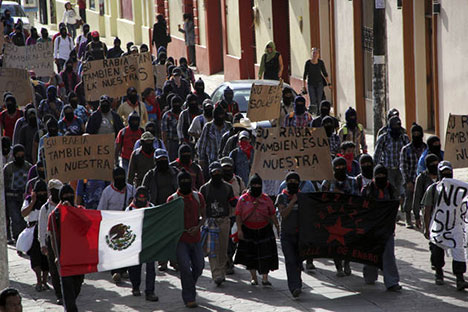 Members of the Zapatista Army of National Liberation (EZLN) marched in San Cristobal on October 8. Signs said: “Your pain is also ours" and “Your outrage is also ours." (Photo: Cuartoscuro)

A spokesman for the Internationalist Group stressed that it was not enough to call for the ouster of a mayor, a governor or even Mexican president Enrique Peña Nieto, as many in the protests have demanded:

“It is not a question of one ruler. It is not a question of one party, even though we have insisted that the PRI, PAN and PRD are all capitalist parties with their hands dripping in blood. All this is the product of a system, not of ‘neo-liberalism’ but of capitalism; and not of ‘globalization’ but of imperialism. This militarization, whose fruits we are seeing in Iguala, is ‘made in U.S.A.,’ it’s made in Wall Street, it’s made in Washington.

“Because here the Republican and Democratic parties consider Mexico and the rest of Latin America to be their back yard. Secretary of State John Kerry said it explicitly. But we are all in the same house. There are 15 million undocumented workers in this country, and we demand full citizenship rights for everyone here.”

The IG speaker ended by saying “we are fighting today, here, in Mexico and everywhere to form revolutionary parties on the program of workers revolution around the world.” Citing Leon Trotsky’s program of permanent revolution, that “in this imperialist epoch it is impossible to achieve even democratic rights without the working class taking power,” he concluded:

The rally ended with a chant of “Asian, Latin, Black and white, workers of the world unite!” ■ 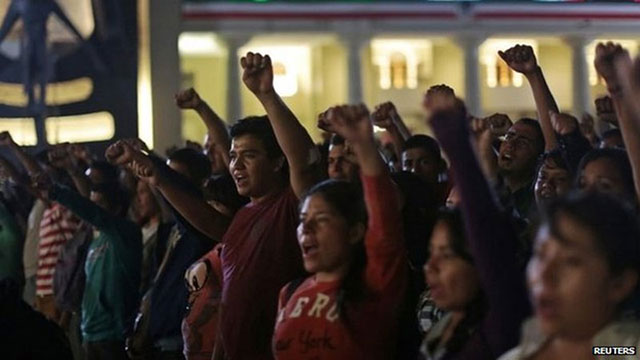