Founding Statement of the Internationalistische Gruppe

German Section of the League for the Fourth International

(Translated from the German)

One hundred years after the Russian October Revolution, we hereby declare the founding of the Internationalistische Gruppe, German section of the League for the Fourth International, as the nucleus of the urgently needed revolutionary internationalist workers party. We undertake this step amid a continuing economic crisis encompassing the entire capitalist world with no end in sight. This crisis is particularly acute in Europe, where its consequences are felt by the oppressed and working people from Britain to Greece. Along with endless imperialist wars and the resulting refugee crisis, the upshot has been the revival of right-wing populist and fascist forces, but also the reappearance of old-school reformists like Jeremy Corbyn in the Labour Party, who however are unable to save the rotting capitalist system. 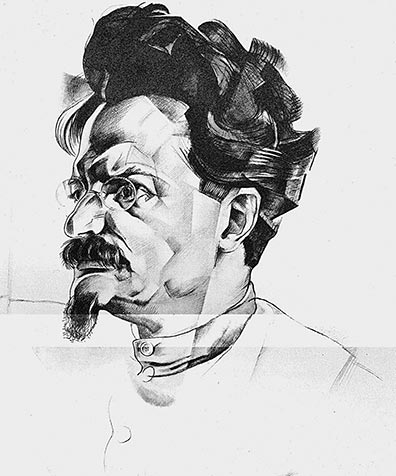 The deteriorating situation urgently calls out for a revolutionary leadership, not least in the heart of German imperialism, the political and economic center of Europe. Such a leadership cannot simply arise out of nothing (ex nihilo) but must be built on the political and programmatic basis of revolutionary Marxism, i.e., Trotskyism. The founding document of Leon Trotsky’s Fourth International, the Transitional Program, declared that conditions are ripe for revolution (in a capitalist system that has long since lost any progressive character and continuously subjects the world to economic crises and wars), that the crisis of humanity is reduced to the crisis of revolutionary leadership, i.e., the construction of revolutionary parties around the world. Every conceivable variety of ex-Trotskyist revisionism has dismissed this thesis as outdated, thereby abjuring the possibility of proletarian revolution as well.

This is particularly noticeable with the International Communist League (in Germany, the Spartakist-Arbeiterpartei [SpAD, Spartacist Workers Party]), which for three decades upheld the program of Trotskyism. However, following the destruction of the Soviet Union and the East European deformed workers states during 1989-92, which constituted a world-historic defeat of the proletariat, the ICL fell into abject defeatism, succumbing to the wave of bourgeois triumphalism over the supposed “death of communism.” In Germany, where the ICL uniquely fought consistently against capitalist reunification and counterrevolution, this turn away from a revolutionary perspective was particularly acutely felt, leading to a sharp internal fight in 1995.

Together with a series of expulsions of veteran cadres internationally, and as part of this struggle and justification for its flight from the class struggle into abstentionism, the restructured “new leadership” of the ICL suddenly discovered that the consciousness of the proletariat had suffered a “qualitative regression” worldwide. The expelled ICL cadres did not become demoralized, but instead formed the League for the Fourth International (with sections in Brazil, Mexico and the Untied States), in order to carry forward the Trotskyist program of international socialist revolution.

In subsequent years, the ICL has revised one Trotskyist position after another until in 2010 it supported the U.S. invasion of Haiti, as a supposed rescue mission after the earthquake. Some months later, the ICL itself had to renounce this self-described “social-imperialist betrayal.” Later, the increasingly social-chauvinist position of the ICL leadership on the refugee crisis – refusing to take up the call for asylum for Syrian refugees, among others – led to an outbreak of internal fights.

The founding of the Internationalistische Gruppe in Germany, as well as of our sister section, the Nucleo Internazionaista d’Italia last year, goes back to this betrayal, as well as to the expulsion of the Better-Late-Than-Never Faction from the Spartacist League/U.S. in early 2016. All these comrades, veteran cadres of the ICL, have now joined the League for the Fourth International because it stands for the genuine Trotskyist program that they joined the ICL to carry out. Together we seek to intervene in the struggles of the workers and the oppressed in order to link them to the struggle for socialist revolution – in contrast to the pseudo-Trotskyists who seek to divert social and class struggles into the bourgeois parliamentary dead end.

Everywhere the need for Leninist-Trotskyist parties to expand and deepen current struggles can be seen. While a majority of the left tailed after the swindler Alexis Tsipras in Greece and joined in his [July 2015] referendum maneuver, the LFI cut through the cynical games of the Greek government. In opposition to the social demolition plans of both the Frankfurt bankers and the bourgeois-populist SYRIZA government, the LFI called to occupy companies, ports, hospitals, etc. In the U.S., our comrades fight in the unions for workers mobilizations to stop the fascists. Thus, for example, in Portland (Oregon), where on June 4 hundreds of trade-unionists and supporters from at least 14 unions mobilized together against a racist/fascist provocation.

In Germany, the overwhelming majority of the left subordinates itself to the social-democratic Left Party (either directly as part of the membership, or as an external pressure group), which joins in administering the capitalist state at the state level. This includes supporting attacks on the unions as well as racist deportations. In order to stop the deportations of refugees, to prevent the constant Nazi provocations or to beat back the huge low-wage sector, it is necessary to mobilize the social power of the working class. This can only be led by an authentic Bolshevik party that politically combats the reformism and protectionism of the social-democratic labor misleaders and counterposes to them the perspective a socialist united states of Europe. The Internationalistische Gruppe sets as its task the building of the nucleus of this party, in the struggle for the reforging of the Fourth International, world party of socialist revolution. ■