For Jacob Blake, George Floyd and So Many Others

For Jacob Blake, George Floyd and So Many Others
Solidarity with Kenosha Anti-Racist Protesters
For Mass Worker/Black/Immigrant Action Against Racist Terror 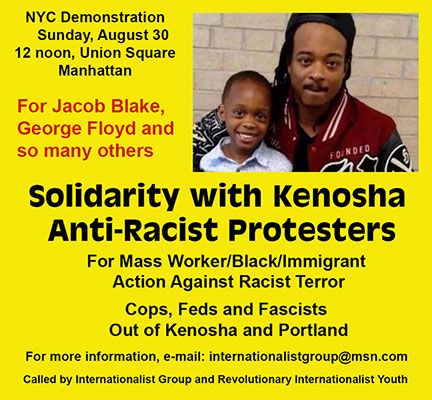 On Sunday, August 23, Jacob Blake, 29, was shot repeatedly in the back by police in Kenosha, Wisconsin. “Yet another black man has been targeted by the racist police terror that has continued to rage since the murder of George Floyd by a Minneapolis cop three months ago,” stated Leticia Torres of the Internationalist Group. “For seeking to defuse a domestic dispute, he was shot in front of his three sons. It is a miracle that Blake survived, but he is paralyzed from the waist down and was grotesquely chained to his hospital bed while the cop who shot him has not been charged and is on administrative leave.”

As Kenosha erupted in outrage, local police responded with the brutal repression they have meted out against black residents in the past. As buildings burned, Wisconsin governor Tony Evers sent in National Guard troops. They were then joined by armed white racists of a fascistic local militia group brandishing semi-automatic rifles. On August 25, Kyle Rittenhouse, 17, who was with the militia and had been greeted by the police, shot and killed anti-racist protesters Anthony Huber and Joseph Rosenbaum, and seriously wounded medic Gaige Grosskreutz.

Now, as in Portland last month, Donald Trump has dispatched 200+ federal agents to Kenosha. The Republican president’s racist rhetoric and provocative military moves are part of his reelection campaign, as he proclaims himself the “law-and-order candidate.” Yet the actual repression of anti-racist protests has been carried out by police and National Guard under orders of the Democratic mayor and governor. “Internationalist protesters are demanding Cops, feds and fascists out of Kenosha and Portland. We say No to Trump’s martial law threats and point out that Democrats are the bosses of the racist killer cops,” Torres added.

Sunday’s protest in NYC will call for massive worker/black/immigrant actions against racist terror. A taste of that power was seen on Juneteenth (June 19) when the International Longshore and Warehouse Union shut down all 29 ports on the West Coast as thousands marched from the Port of Oakland against police brutality and systemic racism. The Wisconsin labor movement showed in 2011 that it could bring out tens of thousands in daily marches against Scott Walker’s union-busting law. But those protests were called off in favor of voting for Democrats, and the law was passed. “Now is the time for unions throughout the Midwest and nationwide to mobilize their members, including in strike action, against racist cop terror and to build a class-struggle workers party against all the bosses parties,” state Internationalist protest organizers. ■