The “Anti-Fascism” of the Bourgeoisie is a Fraud

Lesson of Macerata:
For Mass Worker Action to Defend
Immigrants and Stop The Fascists! 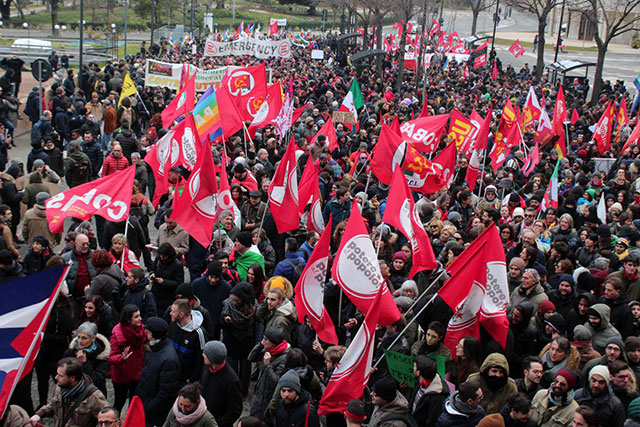 Some 30,000 people joined in the February 10 anti-fascist demonstration in Macerata, Italy. At first the authorities refused to authorize the demo. The capitulation by the leadership of the National Association of Italian Partisans (ANPI) to the ban by the Ministry of the Interior led to a revolt by the membership, which was prepared to march, prohibition or not. The government eventually relented.  (Il Tempo)

The following article is translated from a February 2018 supplement to L’internazionalista, published by the Nucleo Internazionalista d’Italia, section of the League for the Fourth International.

The point-blank shooting of six African immigrants by the fascist Luca Traini in Macerata on February 3 was attempted mass murder. Driving around town, this former candidate of the Lega Nord shot at anybody that he could find with dark skin. When he was finally arrested with the Italian flag wrapped around him, he screamed, “Viva Italia” and gave a fascist salute. After his capture, the fascist organization Forza Nuova (FN) promised to pay for his legal expenses, while the fascists of Casapound and FN organized demonstrations of solidarity with him. Matteo Salvini of the Lega justified the fascist gunman’s actions and called for expelling half a million immigrants. His coalition partner Silvio Berlusconi1 then one-upped him by calling for deporting 600,000. 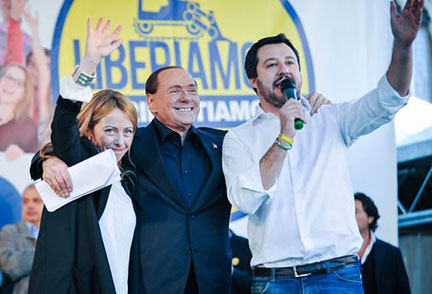 The sinister right-wing coalition: Giorgia Meloni of the Brothers of Italy, Silvio Berlusconi of Forza Italia and Matteo Salvini of the Lega (formerly Northern League).  (Alamy)

The Democratic Party (PD) mayor of Macerata and Interior Minister Marco Minniti (also PD) at first refused to authorize the February 10 antifascist demonstration in Macerata, effectively criminalizing anti-fascist protesters. In response, the leadership of ANPI, ARCI and the CGIL2 cancelled their participation, which led to a revolt (possibly for the first time) in the ANPI ranks, who declared that they would participate despite the ban. In the end, the authorities relented and upwards of 25,000 people marched in the small city in the Marche region to denounce the murderous fascists. There were significant numbers from the bourgeois popular-frontist Potere al Popolo (PaP, Power to the People) and the secular-liberal ARCI. Some 300 metal workers of the FIOM, 100 or so from the syndicalist SI COBAS, many CGIL and other unionists, as well as sizeable groups from smaller unions marching under their union banners showed the potential for working-class mobilization. Politically, though, it was a different story.

Although left and labor groups were present, almost all, like the bourgeois populists, call on the capitalist state to act against the fascists. Yet the repressive apparatus of the bourgeoisie is a breeding ground for the fascist action squads, and their ultimate protector. Whether working directly with the squadristi (in the case of P2)3 or exonerating fascist bombers, as in the 1960s, ’70s and ’80s, the institutions of the capitalist state hold the fascist killers in reserve for future use against a radical left and workers movement. Today, the police and courts are the scourge of the immigrant population, while the bourgeois parties compete with Salvini in anti-immigrant measures and appeals. The guard dogs of capital will not protect immigrant workers. Instead, a revolutionary proletarian vanguard must mobilize the power of the workers movement to defend immigrants.

In the toxic atmosphere of an anti-immigrant election campaign, fascists have attacked immigrants at home and on the streets. The festa (festival) of the Partito Comunista dei Lavoratori (PCL) in Genoa was attacked by Casapound on the night of January 12-13. SI Cobas workers have also been the targets of fascist aggression. Immigrant solidarity centers have been broken into and trade-union organizers assaulted. These attacks are continuing and increasing, as the fascist Forza Nuova demonstration in Rome last October showed, mimicking Mussolini’s 1922 March on Rome. But the response of the opportunist left, whether openly reformist or vacillating centrists, has been to propose an “anti-fascist united front” – in reality a popular front with sections of the bourgeoisie – or to explicitly call on the capitalist state to come to their rescue with bans on fascist expressions.

For opponents of racist reaction and defenders of the oppressed, the poor and working people, the issue is starkly posed: how to defeat these deadly enemies of the working class and oppressed. Bourgeois populists like Potere al Popolo and reformist leftists who embrace the old PCI ideology of Stalinist leader Palmiro Togliatti – that the Italian state and constitution were born out of the Resistance, and are therefore supposedly anti-fascist – usually tell people to rely on the police and/or bourgeois institutions. But the police and bourgeois institutions notoriously work with and exonerate the fascists, as in the bombing of Piazza Fontana (1969), of the Italicus Express (1974), of Piazza della Loggia (1974) in Brescia and the Bologna train station massacre (1980). In each case, fascist perpetrators were acquitted.

This rulers of capitalist Italy have always stood by the rabid fascist bloodhounds. Frightened to death by the Biennio Rosso of 1919-20, particularly the massive factory occupations and the proletarian-led insurrection of September 1920, practically the entire bourgeoisie backed Mussolini’s rise to power to ward off the “red menace,” and subsequently supported his corporate state. Spreading the deadly illusion that you can fight fascism by appealing to bourgeois democracy, Potere al Popolo calls for “the people” to control capitalist institutions; Rifondazione Communist says that “we are anti-fascist and anti-racist just like the Constitution”; and Contropiano issues classless appeals, “Against any form of fascism, and any racism, for democracy, in order to remain human!” The new PCI, meanwhile, wants to “rebuild a new popular sovereignty.” All in the framework of bourgeois rule.

Groups in Italy that call themselves Trotskyist sing the same tune, putting forward a social-democratic strategy calling on the bourgeois state to ban the fascists. Sinistra Classe Rivoluzione (SCR, Left, Class Revolution, affiliated with the International Marxist Tendency) calls to “Ban all neo-fascist organizations!” The Frazione Internazionalista Rivoluzionaria (FIR, Revolutionary Internationalist Faction, linked internationally to the Fracción Trotskista current) published an article (13 July) titled “Outlaw Casapound,” that calls for “A propaganda action to pose the issue of banning Casapound, the organization that instigates private violence and racial hatred.” Such a “strategy” of looking to the state power of the ruling class for protection is suicidal: you can be sure that any political prohibitions will eventually be used against the left, labor and immigrants.

Contrary to this bourgeois and reformist claptrap, mass worker/immigrant mobilizations are urgently needed to stop the fascists and drive them off the streets. This requires a revolutionary class mobilization against capitalist rule. As Leon Trotsky wrote in 1932 of the rise of the German Nazis and their Italian predecessors:

“At the moment that the ‘normal’ police and military resources of the bourgeois dictatorship, together with their parliamentary screens, no longer suffice to hold society in a state of equilibrium – the turn of the fascist regime arrives. Through the fascist agency, capitalism sets in motion the masses of the crazed petty bourgeois and the bands of declassed and demoralized lumpenproletariat – all the countless human beings whom finance capital itself has brought to desperation and frenzy.”

–What Next? Vital Questions for the German Proletariat (1932) 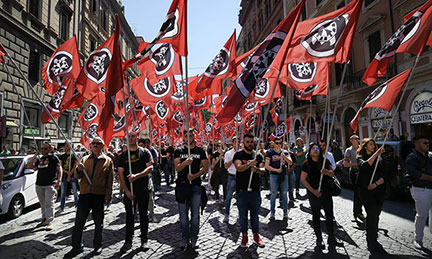 Provocation by the fascist CasaPound in Rome. What's needed are mass workers mobilizations to stop the fascists. (Ansa)

What is needed to actually stop the fascists, not just show moral indignation, is to bring out a superior power. A power strong enough to go up against the capitalist state, whose police enforcers stand behind (and often with) their fascist auxiliaries. That power is the organized working class, and it requires a revolutionary internationalist program to point the way.

In a small example of the kind of proletarian action that is needed to stop the fascists and racists, on 4 June 2017 the Internationalist Group (U.S. section of our League for the Fourth International) brought out some 300 unionists and supporters from 14 unions in the Portland, Oregon area in the first significant labor anti-fascist action in the United States in decades. (The popular-front left instead blocked with the Democratic mayor – and the police – to prevent a direct confrontation with the fascists.) In August our comrades participated in the building of an anti-fascist mobilization based on the port workers of the ILWU union in San Francisco, California that forced the fascists to cancel their rally. And now in Los Angeles, the IG joined with transport workers as protesters blocked a van of the immigration police.

These actions show on a small scale what must be done massively. Today the struggle must be to bring out the power of the workers movement, and to begin the effort of building workers defense guards, as Trotsky advocated in the 1930s. But lasting victory over the fascists can only be achieved through international socialist revolution. To accomplish that requires the leadership of a revolutionary workers party, part of a reforged Fourth International, built on the program of Lenin and Trotsky, that tells the truth to the masses and calls them to action when the hour strikes. To stop the fascists, that hour is now, before it’s too late. ■