From Election Boycott to Nationwide Strike

Mexico: Down With Elections
Under the Military Boot! 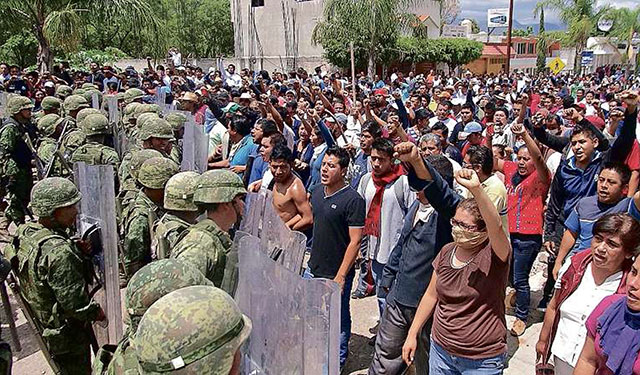 Teachers of Section 22 of the CNTE, on strike against education “reform” undermining public education and calling to boycott the phony election, face off with the army in Huajuapán, Oaxaca, June 6. (Photo: Reforma)

For Workers Action to Defend the Teachers of the CNTE and CETEG!
Forge a Revolutionary Workers Party!

MEXICO CITY, June 5 – The crisis in national politics that erupted with the police massacre of the normalista (rural teachers college) students in Iguala, Guerrero last year has deepened on the eve of Mexico’s midterm elections. Parents of the 43 kidnapped students from the Escuela Normal of Ayotzinapa (and three others who were murdered on the spot) have called for an active boycott of the polls in defiance of the murderous government. Dissident teachers organized in the National Coordinating Committee of Education Workers (CNTE), principally in the states of Guerrero, Oaxaca, Chiapas and Michoacán, have joined the mobilizations to stop the electoral farce with the demand to annul the infamous education “reform” that would persecute teachers and undermine public education.

Now when according to a poll commissioned by the Mexican House of Representatives (Milenio, 4 June), two-thirds of the population says that neither the current government of the PRI (Institutional Revolutionary Party), nor its predecessors, nor any popularly elected authority has done anything for their welfare, and three-quarters of Mexicans say that the federal, state and local governments represent their interests “poorly” or “not at all,” the boycott has taken on a mass character in the states where social struggles have been sharpest. Since the beginning of this week, Oaxaca has been convulsed by the strike of Section 22 of the CNTE, which has occupied offices of the National Electoral Institute (INE) and paralyzed strategic points throughout the state. Meanwhile, highway blockades are everywhere in Guerrero and Michoacán.

Some of the most notable events in Oaxaca:

– Hundreds of teachers cut off the Oaxaca airport, and set up barricades cutting the highway to Puerto Ángel and blocking a Pemex (national oil company) fuel depot;

– For days, teachers blockaded the Pemex refinery at the Isthmus of Tehuantepec as well as sacking and burning election materials in Juchitán and the other ten district headquarters of the INE; and now,

– Section 22 took over the hydroelectric plant at Temescal, in the Cuenca region, that supplies power to southern and central states of the country. Some 500 teachers of Section 22 (Oaxaca state) blocked the Pemex (state oil company) refinery in Salina Cruz for days as part of a boycott of the June 7 elections called for by the CNTE and parents of the rural teachers college students of Ayotzinapa who were disappeared and murdered last September.  (Foto: Noticias)

At the same time in Guerrero, teachers belonging to the CETEG (the state affiliate of the CNTE) took over the state Congress building while Ayotzinapa students on their way to a demonstration in the state capitol Chilpancingo were denied entry to the city by police. Students and parents of the disappeared also blocked highways in Tixtla and Tlapa. In Chiapas, members of Section 7 of the CNTE blocked the entrances to the capital city of Tuxtla Gutiérrez and took over two district offices of the INE. In Michoacán, teachers of Section 18 occupied the state elections offices, while rural police blockaded the highways leading to the Tierra Caliente demanding the release of hundreds of autodefensas (rural paramilitaries financed by ranchers) arrested in 2014.

In a vain attempt to cool the protests, the government of president Enrique Peña Nieto (PRI) authorized the Secretary of Public Education to indefinitely suspend the phony teacher evaluations. This provoked grumblings from such notable pedagogical “experts” as senators of the PRD (Party of Democratic Revolution) and the PAN (National Action Party), the smug, fat-headed anchor of Televisa’s evening news, Joaquín López-Dóriga, and the War Secretary, General Salvador Cienfuegos. However, in negotiations with the Secretary of the Interior, the CNTE insisted that the abusive “evaluations” be canceled, that the disappeared normalistas be returned alive, and the rest of its ten-point list of demands. Late today, the federal government announced that it was sending hundreds of troops to Oaxaca to “guarantee the vote.”

In this worst crisis of bourgeois “governability” that Mexico has seen in the last half century, the Grupo Internacionalista (GI) stands with, and has participated in, the struggle of the teachers and parents of the disappeared students against the fraudulent elections, at the same time as we warn that an electoral boycott, as justified as it is, cannot put an end to the bloodbath and the assault on teachers. If mass action is limited to the confines of the mostly rural states of the southwest, the bosses’ government can hold out, and wait for a more propitious time to give the death blow. As we have emphasized since the beginning of the protests, as well as during the “teacher insurgency” of 2013, what’s needed is a working-class mobilization throughout the country, a nationwide strike drawing in key sectors of the Mexican proletariat, on the road to a socialist revolution to bring down the capitalist regime that has turned Mexico into a giant cemetery.

During the past week a brigade of GI supporters in Oaxaca joined in a mobilization to support the strike of health care workers in the Isthmus of Tehuantepec. They distributed a leaflet calling to “generalize [this struggle] into a public sector workers revolt, in which other sectors must play a fundamental role,” including electrical workers, oil workers, “and the militant teachers who are currently on battle footing.” They also went to CNTE Section 22’s blockade at the nearby refinery of Salina Cruz, where they urged the teachers to call on the oil workers to join them in occupying the plants. At the same time, our comrades (some of whom are health care workers themselves) took part in the blockade of the Pemex depot in the Central Valley.

In Tijuana, comrades of the GI have participated in the teachers mobilizations, notably the strike in April-May that over three weeks, against the disastrous measures of the education counter-reform. This week, they visited the teachers encampment accompanied by students from the Autonomous University of Baja California (UABC), insisting on the need for a joint defense of education. The GI is leading a struggle against the attempt to raise student fees at the UABC. Spokespersons of the GI emphasized to the press that these exclusionary fees make it impossible for the children of maquiladora >workers or farm laborers of San Quintín to study at the university (La Prensa San Diego, 5 June).

The normalistas, teachers and workers of Guerrero have seen with their own eyes that all of the bourgeois political formations are co-responsible for the massacres and starvation policies. The supposed “democratic transition” after seven decades of rule by the PRI is a fraud. Under the presidencies of the clerical-rightist PAN, in compliance with the orders coming from U.S. imperialism, the “war on drugs” was dialed up, leaving a toll of 100,000 dead. As for the PRD, its governor of Guerrero, Ángel Aguirre Rivero, began his six-year term with the massacre of normalistas in 2011, and ended it with the abominable crime in Iguala, ordered by his party comrade, Mayor José Luis Abarca..

The three bosses’ parties who have banded together in the “Pact for Mexico” began their coalition government with the approval of constitutional amendments to enable the privatizing “reforms” of public education. For his part, ex-PRI and ex-PRD politician Andrés Manuel López Obrador (known as AMLO), whose Movement of National Regeneration (Morena) presents itself as the “popular” opposition to the PRI-PAN-PRD triad (and its satellites like the PT “labor party”), initially put forward for governor of Guerrero one Lázaro Mazón, the political godfather of the murderous mayor Abarca. Nor should we forget that President Peña Nieto’s first chief of national security, Admiral Mondragón y Kalb, who unleashed the repression against students and teachers, was proposed for the same position by AMLO during the latter’s last presidential campaign. Students from the Ayotzinapa Rural Teachers College confront police blocking their way into Chilpancingo, the capital of Guerrero state, where they sought to protest the electoral farce, June 3. (Foto: Alejandrino Gonzalez/AP)

The fact is that all the governments of the last century, following the aborted Mexican Revolution of 1910-1917, have been bonapartist or semi-bonapartist, basing themselves on the military-police apparatus. We have pointed out time and again that Mexico is the world champion of electoral fraud, and not by chance. The decrepit capitalist regime cannot tolerate even  a bourgeois democratic regime, which would expose the hated ruling class to mortal danger. As revolutionary Marxists, we insist that the working class and the oppressed should give no support whatsoever to any bourgeois parties or candidates. The “popular fronts” headed by Cuauhtémoc Cárdenas (founder of the PRD) and AMLO, which have chained the workers to sectors of the bourgeoisie, have only served to derail workers’ struggles.

Today the brave students of Ayotzinapa and the battle-hardened Oaxaca and Guerrero teachers are mobilizing to stop these fraudulent elections, taking place under the rifles of the military. On the other hand, the new Movement of Socialist Workers (MTS, formerly LTS) is calling to go out and vote to “annul your vote,” by writing some anti-government message on one’s ballot paper. The difference evidently stems from the fact that the MTS would like to participate in the bourgeois electoral circus as a recognized National Political Association (APN). We of the GI do not reject on principle the use of capitalist elections as a platform for revolutionary propaganda, but the requirements of the bourgeois electoral apparatus (to swear fealty to the bourgeois constitution, hand over lists of members and sympathizers, as well as photocopies of their voting credentials, including photos and home addresses) accepted by the MTS demonstrate a hair-raising faith in the bourgeois state.

Instead of calling for a mobilization aiming at the formation of a workers and peasants (and, in states like Oaxaca, Guerrero and Chiapas, indigenous) government, the MTS and other pseudo-socialist groups have climbed on the bourgeois bandwagon headed by Bishop Raúl Vera, the priest Solalinde and the poet Javier Sicilia, who raise the demand for a constituent assembly to “re-found the nation,” (see our article, “Massacre in Mexico: It Was the Murderous Capitalist State,” The Internationalist No. 39, April-May 2015). The same refrain is repeated by the Revolutionary Popular Front (FPR) of the Communist Party (Marxist-Leninist), which has a notable presence in Oaxaca. The arch-Stalinists of the FPR, who in 2012 called to vote for Gabino Cué for governor and even participated in his bourgeois government, today call for no vote to the PRI, PAN or PRD (thus leaving the door open for Morena) and to struggle for a new constituent assembly.

But the pressing problems facing the workers of Mexico will not be solved with another bourgeois “Magna Carta.” The current Political Constitution of the United States of Mexico establishes many rights (such as free education at all levels, the right to the land, to strike, to nationalized ownership of natural resources, among others), which are negated in practice. Instead of proclaiming another misleading document that leaves the capitalist system intact, he GI seeks to build a revolutionary workers party like Lenin’s Bolsheviks, armed with Leon Trotsky’s theory and program of Permanent Revolution, holding that in the imperialist epoch, even bourgeois revolutionary measures can only be achieved through the seizure of power by the working class, at the head of the exploited peasantry and all the oppressed, which will begin the socialist revolution. Join us! ■