Getting an Education Seems Almost Impossible? It’s the Capitalist System! 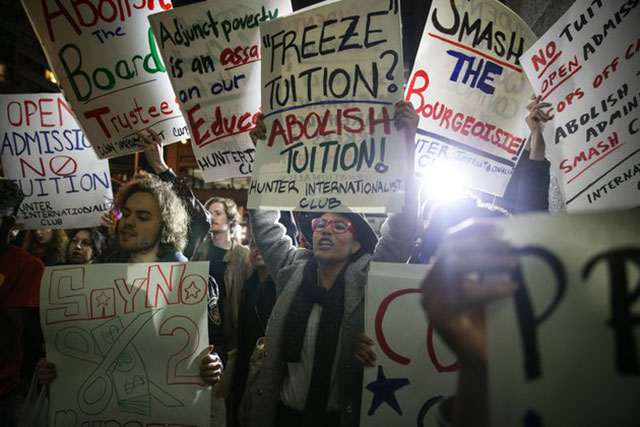 The following leaflet by the CUNY Internationalist Clubs was distributed at the November 12 “Million Student March” at Hunter College.

A year ago, tens of thousands of young people (and many not-so-young) of all races were in the streets night after night protesting racist police killings. Those protests came to an abrupt stop last December. This is the case even though cops are killing civilians at an even higher rate (1,020 in 2015, as of November 9) – remember Freddie Gray in Baltimore, Sandra Bland in Texas and so many others? Why has the “movement” died out? Liberal organizers would not take on the whole apparatus of racist repression, and there is no solution to cop terror under capitalism.

Now we have the Million Student March targeting the high cost of tuition, student debt and low-wage jobs. The issues are real. These are burning questions for millions of young people struggling to get an education, free themselves of debt servitude and make a living in the middle of a continuing economic depression. The official demands – tuition-free public college, cancellation of all student debt, $15 minimum wage for campus workers – are supportable in themselves. But why is this coming up now? Because election season has begun – for elections a year from now! – and this latest would-be movement is designed to pressure the Democrats.

Look at the context: at the beginning of the year, President Obama calls to make community college free, sort of. In May, Vermont senator Bernie Sanders, the de facto Democrat who calls himself a “democratic socialist,” introduces a bill for free undergraduate tuition at public colleges while liberal Massachusetts senator Elizabeth Warren puts forward resolutions calling for eliminating student debt. In August, Democratic front-runner Hillary Clinton introduces a trillion-dollar plan to “help” undergrads pay for tuition (including by working more, and getting  “realistic” contributions from their families!).

The truth is, the Million Student March organizers are acting as student auxiliaries of the Sanders campaign, to put heat on Clinton and get students to vote for the Dems in 2016, like many did in 2008 for Obama.

But like the endless racist police killings of African American men, and women, and Latinos, the root cause of endless tuition hikes, the burden of unpayable student debt, the low-wage, dead-end jobs that don’t even pay the bills is the capitalist system. Revolutionaries demand that college be free, and that the private colleges should be taken over and made public with no tuition there. The Internationalist Clubs at the City University of New York say:

“We fight for free, integrated higher education for all; for open admissions with no tuition and living stipends so working-class students can afford to study.... We say abolish the Board of Trustees. CUNY should be run by democratically elected committees of students, teachers and workers.”

But we also tell the hard truth: that capitalism is decaying, and it will take hardcore struggle, based on the power of the working class and leading to a revolution, to get this. Pressuring the Democrats is a dead-end.

Education is a class issue. There is a virulent assault on public education underway by all sectors of the ruling class, including the same Democrats who are talking free tuition in their campaign rhetoric. Notably Obama who has spearheaded the attack on teachers unions, and Clinton and their big business backers. Hillary Clinton was on the board of the poverty-wage giant Walmart, and has founded $5-a-day sweatshops in Haiti. And she isn’t about to drive a stake into the heart of the student loan vampires, because those are the same Wall Street bankers and hedge fund operators who have funded her (and Obama).

CUNY makes a lot of noise about how it’s oh-so-affordable, that with federal Pell grants and state TAP funds 58% of its students don’t pay tuition, that its tuition is lower than most state colleges, that its students have less debt than others. First off, it fudges its figures. It claims that 2010 Hunter College grads only have $7,500 in student debt. But a New York Times student loan calculator says average student debt at Hunter is almost double that, $13,000. And while many poor students are able to get tuition aid, and well-off middle-class families may be able to afford the tuition, who can’t? Students from working-class families, and the 250,000 attending CUNY part-time because they have to work full-time at jobs are not eligible for that aid.

So why do we say the Million Student March is an auxiliary of the Sanders campaign? Just look who its supporters are (http://studentmarch.org/who-supports-millionstudentmarch/): College Students for Bernie, Millenials for Bernie, Seattle Colleges for Bernie Sanders, Students for Bernie Sanders at Northeastern, Pitt, Binghampton, University of Oregon. And then there are Socialist Alternative (SAlt) and Young Democratic Socialists, two social-democratic outfits that most blatantly sidle up to Sanders  (although many on the left are playing the same game, just pretending to keep a little more distance from their favorite Democrat).

The Million Student March demands bear a striking resemblance not only to the economic populism pushed by Sanders but to specific planks from his platform. The chances of this being a coincidence are nil. The organizers’ strategy is clearly to pressure, coax, lobby and beg the Democrats. A real fight for free tuition must be a struggle against the capitalist government and its “two-headed property party” of Democrats and Republicans.

The assault on public education? In fact, it’s led by the Democratic Party from the White House on down. Not only that, Obama’s vice president Joe Biden “has played a consistent and pivotal role in the financial industry's four-decade campaign to make it harder for students to shield themselves and their families from creditors” and was “one of the key proponents” of 2005 legislation that prevents private student debt from being “discharged, rescheduled or renegotiated as other debt can be in bankruptcy court” (International Business Times, 15 September).

What about the fight for a big raise in the minimum wage for campus workers? $15 an hour would be an improvement for some, but it is way less than what people actually need in order to make ends meet in New York City. On Tuesday, there was a big “Fight for $15” march in Foley Square. Signs said “Vote for $15.” How? The message is to vote for the Democrats. Other signs said, “Thank You Governor Cuomo,” and the lead speaker was … Democrat Cuomo, the same one who wants to make it easier to fire teachers, who has slashed CUNY’s budget and who sabotaged the New York State Dream Act for undocumented students.

And student debt? At CUNY, quite a few undergrads go into debt (despite the university’s boastful subway ads), while grad students are frequently drowning in it. Nationwide the figures are staggering: $1.9 trillion in outstanding education-related loans (surpassing credit-card debt), of which 23% is “seriously delinquent” (USA Today, 23 August).

Definitely this debt should all be cancelled – but how is that going to happen? Certainly not through supporting the Democrats! The idea that the capitalists would agree to student debt being cancelled is obviously unrealistic: for them, massive indebtedness is another wonderful way to subjugate us to their merciless profit system, all the more so when we’re talking trillions. A real fight against that debt poses the need to sweep away the profit system itself – in other words, the need for workers revolution.

All too many “leftists” avoid stating such facts, trumpeting the Million Student March but keeping quiet about the need to oppose the Democratic Party. It’s a classic case of what Marxists call opportunism – go with the flow to try to get some temporary advantage. Some, like Socialist Alternative, enthuse endlessly over “Bernie,” helping him spread the lie that he is some kind of “socialist.” Others (like the International Socialist Organization) ask Sanders to please run as an “independent” on the slate of the Greens or some similar capitalist mini-party.

Then we have the Revolutionary Student Coordinating Committee (RSCC) and groups it influences such as Students Without Borders (SWB). RSCC put out a leaflet for the November 12 march whose title says “WE DEMAND A TUITION FREEZE...” Wait a minute – freeze, not abolish, tuition? This is well to the right of the official march demand for tuition-free public college (which, to hedge all bets, is included in the RSCC leaflet’s fine print). RSCC leaflets shy away from attacking Sanders, Clinton and the Democrats – in accordance with the Maoist “mass line” (watering your ostensible politics down in pursuit of coalitions with liberals).

This is summed up in vapid populist ditties about “CUNY for the People,” which could come from one of those CUNY subway ads. Meanwhile Hunter SWB spreads dangerous illusions in the administration, demanding that it pursue “more aggressive tactics” against “harassment on campuses.” Hello?! The Hunter administration used just this kind of argument as an excuse to turn the campus into a mini police state, putting in turnstiles “against crime” (even though its own “public safety” reports showed virtually no violent crimes on campus). They did this during a wave of student protest, in order to seal the campus off and subject it to more complete police control.

Reformists like SAlt pose the issue of starvation wages as a photo op for Democrats, revolutionaries emphasize that it must be waged as a class struggle against the capitalists and their politics aimed at keeping the workers and oppressed chained to the system of exploitation. Talking about unity when they want to “unite” with bourgeois politicians is a hallmark of every kind of social-democratic and Stalinist politics. Any serious struggle requires above all political clarity, the need to take a clear stand: for or against the parties, politicians and institutions of this racist capitalist system.

We Marxists would back real reforms that made a dent in this misery, but we tell the truth: the ruthless rule of the capitalist class, which subordinates everything to its profits, cannot be reformed away. Seeking to evade such central class questions, or posing “student issues” as somehow separate from broader social struggles, can only help the Democratic Party of U.S. imperialism subordinate yet another generation to the needs of the capitalist system. That is the cause of high tuition, low wages and “indentured studenthood.” Only the multiracial, international working class has the power to put an end to it – through socialist revolution.

How workers power can win real struggles was just shown by the immigrant warehouse workers at B&H Photo, who organized against blatantly racist bosses and voted in a union on November 4. Their struggle was inspired by the victorious organizing campaign waged by the Hot and Crusty bakery workers just seven blocks from Hunter College. The Internationalist Club has been highly active in each of these struggles, and both groups of workers will continue to need active solidarity in the coming period. (Let us know if you’d like to get involved!)

Many young people today are coming to the conclusion that capitalism is a blind alley, and expressing interest in socialist ideas. Combining militant activism in the class struggle with serious study of Marxism, the CUNY Internationalist Clubs are working to win thoughtful and militant-minded youth to the fight for international socialist revolution. Join us! ■