Fascist Pogrom in Odessa,
And the Aftermath 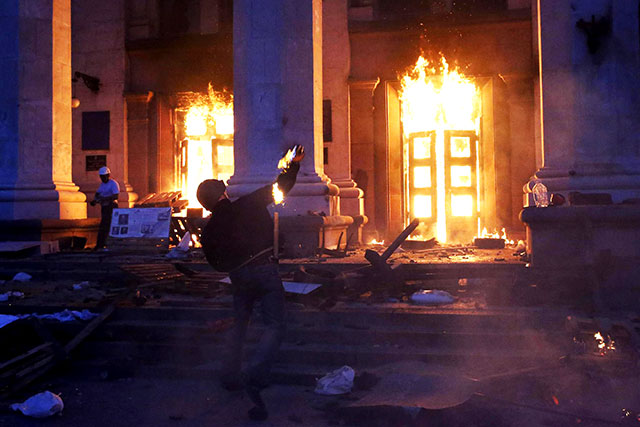 Fascist attacker throwing gasoline bomb at trade-union headquarterts in Kiev, Ukraine, May 2. At least 48 died in the massacre and over 200 were injured.  (Photo: Yevgeny Volokin/Reuters)

Almost from the outset of the protests that began last November in Kiev’s Independence Square (the “Maidan”), the occupation was led by right-wing Ukrainian ethnic nationalists, and increasingly by outright fascists. As weeks wore on and battles escalated, the square came to dominated by “self-defense groups” of the fascist Svoboda (Freedom) Party and the neo-Nazi Pravy Sektor (Right Sector). It was these sinister forces whose provocations led to the February 22 overthrow of the corrupt and despised government of elected president Viktor Yanukovich. While Western governments and many on the left hailed the “democratic” uprising, we and others warned that the new fascist/nationalist regime backed by the U.S. and European imperialists was a threat to the Russian-speaking population in East and South Ukraine.

On May 2 came the indelible, horrific proof. As a pro-Russian revolt spread through the eastern oblasts (provinces), centered on the proletarian coal mining and steel manufacturing Donetsk Basin (the Donbass), 1,000 or more fascists descended upon the multi-ethnic Russian-speaking Black Sea port city of Odessa. The intention of these “Euromaidan” thugs was to teach the hated moskali (ethnic slur for Muscovites) a bloody lesson. With axes, revolvers, gasoline bombs and stun grenades they went about their deadly work with a vengeance, shooting several people, torching a tent encampment, chasing anti-Maidan protesters into the House of Trade Unions and then burning down the building. By official count, at least 48 people were murdered in the heinous massacre and hundreds injured, although nine days later dozens were still missing.

This was a well-planned operation, and not just by some ultra-rightist street gangs but by the Kiev junta in which fascists control the key “power ministries” – interior, police, military – and by oligarchs acting as regional warlords with their own private armies. The pretext was a soccer game between the Odessa Chernomorets and the Metalists of Kharkiv. Hundreds of fascists were brought in on buses and trains posing as “just” soccer fans. Throughout Europe, soccer fan clubs often shade into right-wing goon squads. But in Ukraine, Svoboda built up its paramilitary squads based on the “Banderstadt Ultras,”  a club connected to the Lviv team which displays portraits of Stepan Bandera, the anti-Soviet Ukrainian fascist nationalist who allied with Hitler’s Nazi invaders in World War II, and the red-and-black flag of his Ukrainian Insurgent Army.

The stage for the massacre was set in advance when the traditional march by hometown fans to the stadium was turned into a “march for Ukrainian unity” and it was decided to bring Maidan “activists” – i.e., the paramilitary squads. This was a deliberate provocation by the Kiev regime. On the day of the march, local anti-Kiev militia members set out to stop the fascists but badly miscalculated the balance of forces. Outnumbered, they retreated and barricaded themselves in a nearby shopping mall. When police cars arrived, the ultra-rightists headed to the Kulikovo Pole Square where there was an anti-Maidan tent city. The tents were quickly set afire with Molotov cocktails. The couple hundred people in the camp that day, many of them reportedly women and elderly men, sought refuge in the nearby House of Trade Unions.

What happened next was sheer mass murder, a massacre carried out by the fascists and other Ukrainian ethnic nationalists. Molotov cocktails were thrown at the lower floors of the building, which burst into flame. As fires spread quickly, smoke billowed through the building. Dozens of people died from asphyxiation or burned to death. Others were shot, strangled and stabbed as the fascists entered the building to finish off their victims. Many fled to the roof, trying to barricade themselves there against the killers. Desperate people tried to jump from window ledges: some perished in the death leap, others were only injured but then were beaten and several were killed with bats by the fascist stormtroopers. This included a member of the leftist Borotba group and a regional deputy who was campaign manager for the Borotba candidate for mayor. 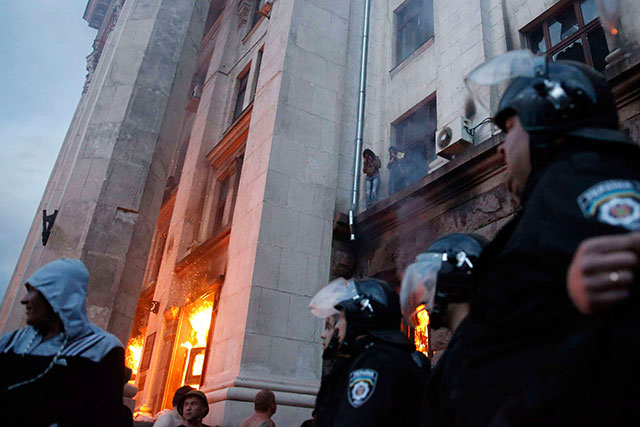 As this gruesome slaughter was going on, the nationalist crowd stood in Kulikovo Pole Square singing the national anthem and chanting “Glory to Ukraine,” “Death to enemies,” and “Knife the moskali” (anti-Russian ethnic slur). A member of the Pravy Sektor neo-Nazis, Dmitry Rogovsky, told a reporter for the London Guardian (3 May) that, “The aim is to completely clear Odessa [of pro-Russians]…. They are all paid Russian separatists.” This massacre was carried out with the complicity, at the very least, of the Kiev junta. There were few police around at first, most having been dispatched to guard another building. When they did arrive, lines of police just stood by, doing nothing to stop the violence. And when pro-Russian survivors managed to escape the burning building they were arrested, while the nationalist attackers went free.

The Odessa massacre of May 2 is the ugly face of Ukrainian fascism backed by state power. The same day that the fascist “hundreds” were dispatched to Odessa, national security chief Andriy Parubiy (a founder of the Hitlerite Social-National Party) ordered the army to assault rebel-held Slovyansk. On May 3, ten unarmed civilians were killed as troops and paramilitaries overseen by deputy security chief and Pravy Sektor capo Dmyto Yarosh stormed Kramatorsk. Also that day, hard-line interior minister Arsen Avakov, who labels all pro-Russian protesters “terrorists,” claimed that the victims in the House of Trade Unions were “attackers” who hurled Molotov cocktails on “civilians” and this supposedly set off the fires, despite multiple videos showing the opposite. Naturally, the Western press repeated this “official story,” or simply excised any mention of who had torched the building.

The May 2 massacre was a pogrom, which like the Odessa pogrom of October 1905 was launched by the authorities in order to crush a rebellion. A century ago the targets were Jews, who played a leading role in the 1905 Revolution against the tsarist autocracy; today it is pro-Russian rebels resisting the junta. In 1905, the pogrom was led by Black Hundred (chernovaya sotnia) squads, modeled on the units of the Cossack army. Today the murderers are the Maidan “sotnias” led by the Svoboda and Pravy Sektor fascists.1 Then and now, they carried out their carnage knowing that they enjoyed impunity. And like the German Nazis they model themselves on, they celebrate their bloody deeds, only today instead of Deutschland über alles they sing “Ukraine has not yet died … our enemies will vanish.” 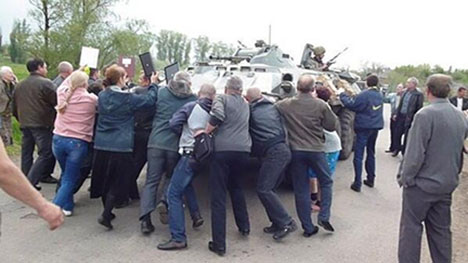 Outrageously, some “leftists” have alibied the pogrom, including the Autonomous Workers Union (AWU), a small group of supposed revolutionary syndicalists, whose comments have been widely circulated in the cyber-anarchist milieu. An AWU “Statement on the Odessa Tragedy” (5 May) gives a supposedly “even-handed” account. Thus the “pro-Ukrainians” are described as a “civilian crowd” (although with some “football hooligans”) which became “enraged” by anti-Maidan attacks. Of the cold-blooded murder at the Trade Union House the AWU writes that “both sides fired shots and hurled Molotov cocktails both to and fro the roof of the building,” and repeats the fiction that “it is still unclear which factor contributed the most to the fire, which burned some and suffocated others to death.” Unclear? Only to the willfully blind.

The AWU doesn’t mention the large numbers of armed fascists in organized fighting squads, which is amply attested to in other accounts and video footage. What is behind this pronounced “pro-Maidan” tilt? A main motivation is evidently to attack the leftist Borotba group and to get “any left or anarchist organization in the world to sever any ties … with this organization.” The AWU attacks Borotba for having been present among the defenders of the Trade Union House – hardly a crime! – neglecting to mention that Borotba’s comrades and supporters were badly beaten and two of them killed. To justify its shameful position, the AWU piously laments that “proletarians are busy fighting each other for the interests of various bourgeois cliques.”

The same theme is reflected in a similarly titled commentary by the International Socialist Organization in the U.S., “The Tragedy in Odessa” (13 May). “There were undoubtedly fascists involved in the worst of the attacks, and the police clearly played a role,” the ISO avers, albeit not mentioning which side the fascists were on or what the role of the police was. It points a finger at “nationalism, both Ukrainian and Russian,” and says that “the ultimate provocateurs of violence and division across Ukraine … are the competing blocs of imperialists and oligarchs.” But the ISO is particularly exercised against “Russian imperialism” which it accuses of “expanding into eastern Ukraine, having already seized Crimea.”2 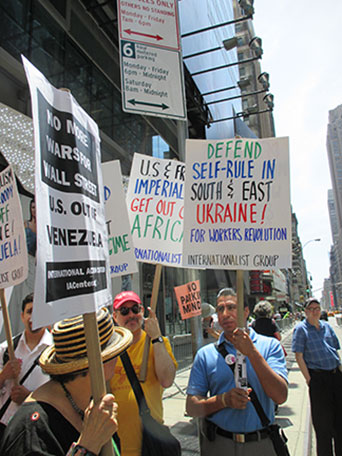 This hand-wringing over the Odessa “tragedy” and posing a supposed equivalence between both sides – pro- and anti-Maidan, Ukrainian and Russian nationalism – is a cynical cover up for a fascist pogrom. There is no equivalence: the “pro-Russian” or “anti-Maidan” protesters are resisting the attack by an imperialist-backed, Ukrainian nationalist and fascist junta that took power in a coup d’état and is now slaughtering Russian-speaking Ukrainians in the south and east. Intervention by the Kiev regime or its Nazi attack dogs in Odessa is intended to subject the population of this culturally Russian city. Resistance to it is just. The ISO claims: “Opposition to Russian imperialism does not mean support for Western neoliberalism, and it is not a surrender to fascism.” Actually, the ISO policy is support for Western imperialism and excusing fascism.

Even more explicit is “A Socialist Eye-Witness in Odessa” (6 May) which appeared on the web site of the “Left Opposition” group in Ukraine and has been reproduced by several leftist sites in the West. “Who were the culprits in the Odessa tragedy? For me, the answer is clear – Russian fascists and the police,” writes “eyewitness” Serhiy. The author, it turns out, was hardly a neutral observer but worked with the masked Maidan activists. He then repeats the well-worn lie: “No-one knows who set the House of Trade Unions on fire: the Molotov cocktails were flying from both sides.” Except the gasoline bombs were thrown into the building, igniting the deadly blaze. And he ends by blaming the pro-Russian protesters: “The death of your supporters on Kulikovo is entirely on your conscience.”

Were there reactionaries among the anti-Maidan protesters? No doubt. Proletarian internationalists would not make common cause with Cossacks and Russian chauvinists who want to recreate the tsarist empire. But faced with an assault by murderous Ukrainian-nationalist thugs and neo-Nazi stormtroopers, sent by the Kievjunta backed by U.S. and European imperialism, we defend those who resisted and vow to avenge those who died in this pogrom with workers revolution. The anarcho-syndicalist and “socialist” apologists for fascist terror in Ukraine should be reviled by honest revolutionaries and class-conscious workers the world over. ■