SL/ICL Impeached By Its Own Past

So here’s a new one. For the first time in ten years, the Spartacist League and its International Communist League (SL/ICL) have published an article on Brazil. Could it be, now that the New York Times and other imperialist media have started publishing articles on the acute political crisis wracking the country, that their interest in the class struggle in the largest country in Latin America has been awakened? Actually, no. The main point of the article in Workers Vanguard (6 May), and the sole reason for publishing it, was to attack the Internationalist Group and our comrades of the Liga Quarta-Internacionalista do Brasil, sections of the League for the Fourth International, as supposed “Militant Supporters of the Popular Front.” Why now? The answer is obvious: to divert attention from the SL/U.S.’ recent expulsion of the Better-Late-Than-Never Faction of the ICL, which posed a sharp and effective challenge to its zigzagging opportunism.

What’s happening in Brazil today is that after 13 years in office, the Workers Party (PT – Partido dos Trabalhadores) is on the ropes. Its “popular front” government with bourgeois allies is coming apart. As the PT has succeeded in demoralizing many workers and youth with its pro-capitalist policies, the traditional bourgeois right wing, with ominous backing from the repressive apparatus, is moving to reclaim political power in order to ram through even more brutal anti-working class austerity and to further open up Brazil’s oil industry to the imperialist monopolies. In this difficult situation the working class must fight against the power-grab by enemies of workers and democratic rights, and also against the popular-front government with its anti-worker policies. In short, the anti-democratic drive for impeachment is the spearhead of an attack whose real target is the working class and the oppressed population of Brazil. All of this is of no interest to the SL/ICL which ­– unsurprisingly – presents no program for class struggle in Brazil. The WV article sums up their passive neutrality: “Brazil Impeachment: Workers Have No Side.” 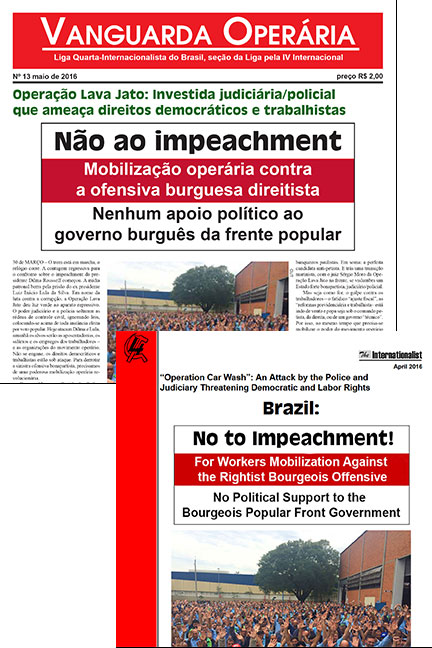 The IG and LQB oppose impeachment in Brazil while calling for workers mobilization against the ominous judicial/police offensive targeting the working class, and against the anti-worker policies of the popular-front government.

The single count of WV’s indictment of the IG and LQB is that in the current drive to oust Brazilian president Dilma Rousseff, “their line is ‘No to Impeachment,’ which is a vote of political support for Rousseff's popular-front government.” Says who? The LQB has, uniquely on the Brazilian left, opposed the PT-led popular front from the beginning. Although the SL/ICL loves selectively quoting, an attentive reader can see in an illustration that the full headline from the LQB’s Vanguarda Operária (Workers Vanguard), translated in The Internationalist, reads: “No to Impeachment! For Workers Mobilization Against the Rightist Bourgeois Offensive – No Political Support to the Bourgeois Popular Front Government.” Later on WV dismisses our “ritually denouncing the popular front and calling not to vote for it” as merely “Marxist-sounding rationales to push the same line as much of the reformist left: save the Rouseeff government.” Except our headline and article say the opposite, in considerable detail.

The SL/ICL’s claim that to oppose the seizure of power by the den of thieves in the Brazilian Congress together with a judicial apparatus working hand-in-glove with pro-imperialist reactionaries and increasingly assertive militarized police forces you must be for the current government is pure sophistry. When we call to oppose Hillary Clinton, Bernie Sanders and the Democratic Party, that supposedly means we are for Trump and the Republicans? Nonsense, unless those making the argument accept that there is no alternative to the “choices” offered by the current bourgeois political system. In fact, that is exactly the SL/ICL’s policy in Brazil, since they hold that revolutionary struggle is impossible today, whereas the LQB and LFI present a program for working-class mobilization against all wings of the bourgeois ruling class. WV sneeringly dismisses this, saying “the IG/LQB throws around calls for factory occupations and a general strike, even claiming to politically oppose the government.” 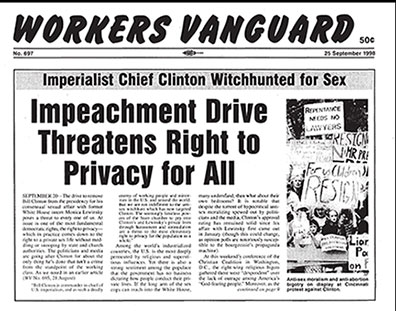 But the SL/ICL’s pathetic attempt to smear the LQB, the IG and the LFI as supporters of the popular-front government which we vociferously oppose has an additional problem. As the 20th century was drawing to a close, the latter-day Spartacist League opposed the impeachment of Bill Clinton. Take a look at the front-page of Workers Vanguard of 25 September 1998: “Imperialist Chief Clinton Witchhunted for Sex, Impeachment Drive Threatens Right to Privacy for All.” By the SL’s current logic, in opposing impeachment it supported Clinton and the Democrats. When we raised this with SLers buzzing like disoriented bees around our contingent at this year’s May Day assembly in NYC’s Union Square, they flatly denied that the SL had opposed impeaching Clinton. A few days later, at a Verizon strike rally, one SLer claimed that WV had corrected that line. Except it didn’t. In an article on “Clinton Impeachment and U.S. Imperialism,” WV (8 January 1999) favorably quoted its earlier article, repeating “Anti-Sex Witchhunt Threatens Privacy for All,” but opined that if impeachment weakened the imperial presidency it “would not be a bad thing.”

For our part, the IG headline on the issue was, “To Hell with Monicagate and Impeachment – Clinton Is a War Criminal.” Noting that U.S. bombs began falling on Baghdad only hours before the U.S. Congress began voting on the impeachment of the warmonger-in-chief, we declared: “Democrats, Republicans Murder Iraqis, Starve Welfare Moms and Kids” and we called to “Defeat U.S. Imperialism! Defend Iraq!” (The Internationalist No. 7, April-May 1999).

Back in the days when Workers Vanguard was the voice of revolutionary Trotskyism, the Spartacist League explicitly supported the impeachment of Richard Nixon. In a much-commented-on headline, WV No. 43 (26 April 1974) proclaimed, “Impeachment Is Not Enough!” The article stated: “The Spartacist League has pointed out that the labor movement must support a move by the bourgeoisie to impeach Nixon” at the same time as it argued that in response to “the real crimes of Nixon and his class, it is necessary to raise a program which leads to the inescapable conclusion that workers must take power in their own hands.” So according to the present-day SL’s logic, did this mean supporting the Democrats? In fact, it was part of the then-revolutionary SL’s struggle against both bourgeois parties.

The latest Workers Vanguard linked the impeachment proceedings against the Rousseff government to “a widespread corruption scandal rocking the country.” This is the ludicrous explanation given for why key sectors of the Brazilian ruling class are so avid to oust the popular front. It simply repeats the pretext spouted by the bourgeois press, and ignores completely how the impeachers (who are among the most corrupt politicians in the country) are gearing up to crush workers resistance to cutbacks, privatizations and anti-labor “reforms.” The WV article says “While the IG/LQB cynically rants and raves about ‘bonapartism,’ they admit that a coup in Brazil is unlikely,” but it leaves out our explanation of the mounting dangers of an authoritarian regime being installed without a coup d’état.

Another red herring thrown into its pot pourri of lies, distortions and non-sequiturs is a tortured attempt to contrast saying no to impeachment in Brazil to Jan Norden (editor of The Internationalist and of Workers Vanguard in its revolutionary period) justifying a vote that brought down the government of Sri Lanka in 1964.1 We uphold both positions, which are in no way contradictory.

In the course of its step-by-step abandonment of revolutionary Trotskyism in a downward spiral of defeatism following the counterrevolution that destroyed the Soviet Union, the post-Soviet SL has come up with a string of electoral caveats, to wit:

–thou shalt not call for a constituent assembly, on principle, even as part of a revolutionary program for soviet power against a dictatorship; but

–thou shalt vote for a bourgeois constitution coming out of a constituent assembly in order to oppose the right (in France, in 1946);

–thou shalt not put forward revolutionary candidates running for executive offices (as the then-revolutionary SL, as well as its predecessors in the Marxist movement, did repeatedly); but

–thou shalt in certain cases give critical support to candidates of opportunist groups running for executive offices (go figure);

–thou shalt not even solidarize with electoral boycotts (as the ICL’s Mexican group timidly did last year, only to be sharply reprimanded by the ICL leadership, while the Grupo Internacionalista actively participated in workers’ actions against the electoral farce)2 except on the eve of  insurrection (in which case the bourgeoisie would be insane to call an election); and now

This hodgepodge of contradictions is a program for centrist confusion, not revolutionary struggle. For these pettifogging ex-Trotskyist poseurs,

–thou shalt not call for any concrete workers struggle against the bourgeoisie to drive police out of the unions, to hot-cargo war material, to have workers strikes against the war, to defeat U.S. imperialism;

and the supreme commandment is

–thou shalt pull thy hands out of the “boiling water” of the class struggle, as the ICL advocated when in 1996 it abandoned and stabbed in the back the struggle of the LQB to remove police from the unions. 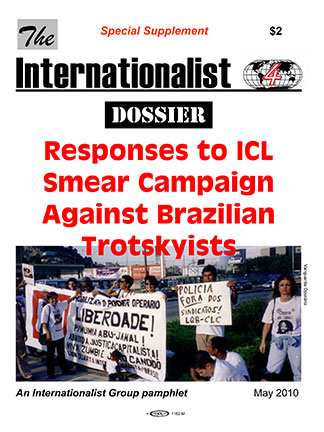 IG dossier on ICL abstentionist betrayal and slanders against Brazilian Trotskyists (click on image to read).

The SL/ICL then followed this up with accusations that we sued the unions, a flat-out lie, when in fact LQB supporters were the elected leadership of the union who were sued (and removed from office by the courts) by pro-police elements whose lies the ICL has repeated ever since (including in its latest article).3

“Recoiling from their social-chauvinist support for U.S. imperialism in Haiti in 2010, the ICL nonetheless still refuses to raise the defeat of U.S. imperialism as a proletarian task. ‘Outsourcing’ this task to the I.S. is yet another example of looking to reactionary social forces after writing off the revolutionary capacity of the proletariat as a result of counterrevolution in the Soviet Union.”

At the May 4 Verizon strike rally, an SLer accosted a young comrade, saying that the Internationalist Group betrayed the workers of Brazil. She responded, “No, you already did that.” And when he claimed that by opposing impeachment we are supporting the popular front, she replied, “No, we fight the popular front, but you don’t care that there is a right-wing offensive against the workers.” Hit the nail on the head. ■


We urge anyone seriously interested in learning about what’s happening in Brazil to read the complex of articles on the Internationalist Group/League for the Fourth International website (www.internationalist.org):

–“Brazil: No to Impeachment! For Workers Mobilization Against the Rightist Bourgeois Offensive, No Political Support to the Bourgeois Popular Front Government”;

–“For Class Struggle Against the Bonapartist Threat in Brazil”;

–“The Role of Imperialism and the Military in the Brazilian Political Crisis”; and