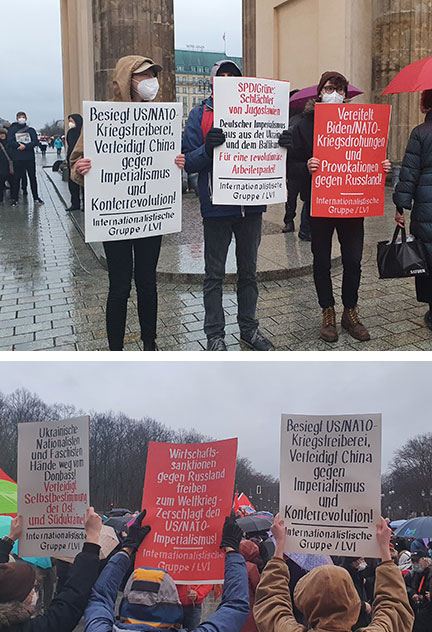 The war propaganda being spewed out by Washington and NATO (North Atlantic Treaty Organization) has become increasingly hysterical. As the U.S. administration of Democrat Joe Biden declares that Russian president Vladimir Putin is about to seize Ukraine next month, next week, tomorrow or yesterday, it seems intent on provoking the Kremlin into undertaking anything that could be portrayed as an invasion. The evident purpose, since the NATO armies are not about to send troops to Ukraine, is to have an excuse to impose heavy economic sanctions against Russia. In particular, the White House and Pentagon want to turn the screws on the German government and get it to cancel the Nord Stream 2 pipeline bringing natural gas from Russia, which is essentially completed.

In the face of the incessant imperialist drum beat for war, there have been very few protests by the left, much of which is itself imbued with the anti-Russia phobia promoted by its liberal big brothers. A number of these fake-left groups embraced the Ukrainian nationalist/fascist Kiev coup in 2014, engineered by U.S. Democratic president Barack Obama, that overthrew the elected pro-Russian president and launched a war against the population of the Russian-speaking regions of eastern and southern Ukraine. Today the breakaway “people’s republics” of Donetsk and Lugansk in the coal mining Donbass region are under fire from the same fascist and fascistic Ukrainian nationalist forces that led the 2014 “Euromaidan” coup. 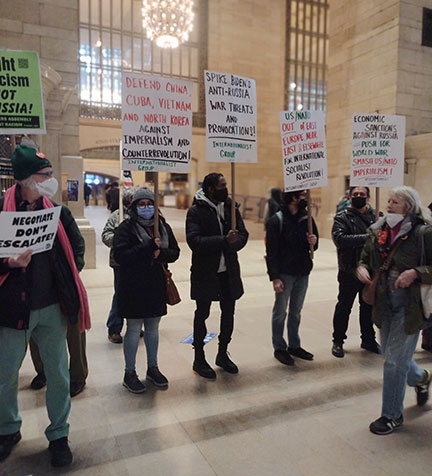 Supporters of the League for the Fourth International attended protests at Berlin’s Brandenburg Gate on February 18 and at New York City’s Grand Central Terminal on February 19. The comrades carried signs with slogans including “Spike Biden/NATO War Threats and Provocations Against Russia”; “Defeat U.S./NATO War Drive – Defend China Against Imperialism and Counterrevolution”; “Ukraine Nationalists and Fascists, Hands Off Donbass – Defend Self-Rule in South and East Ukraine”; “Economic Sanctions Against Russia = Push for World War, Smash U.S./NATO Imperialism!”; and “U.S./NATO Out of East Europe, Near East and Elsewhere – For International Socialist Revolution.”

The national sections of the LFI underscored the need to oppose the warmongering of the imperialist rulers at home. Thus in Germany, the Internationalistische Gruppe carried a sign denouncing the social-democratic and eco-imperialist coalition government, “SPD/Green Butchers of Yugoslavia, German Imperialism Out of Ukraine and the Baltics – For a Revolutionary Workers Party!” In the U.S., the Internationalist Group proclaimed, “Democrats: Butchers of Yugoslavia (1994-98), Instigators of Kiev Coup (2014) – For a Revolutionary Workers Party!”

The frenzied incitement and saber-rattling of Biden & Co. are avidly pumped up by the media, with liberal outlets in the lead. This serves among other things to further demonize U.S. imperialism’s enemies list, with now-capitalist Russia and China, a bureaucratically deformed workers state, topping the list. Seeking to condition and prepare the population for war by the imperialists, they pose the danger of a third world war. We say: “Washington, Wall Street – The Enemy Is at Home!” Only world socialist revolution can banish forever the threat of new world wars. ■