Brutal Torture of Son of Grupo Internacionalista Leader in Oaxaca 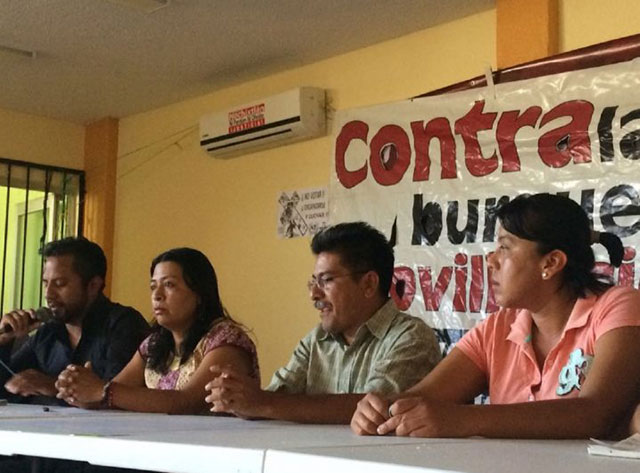 Press conference, May 8, at headquarters of Section XXII, CNTE, the combative teachers union in Oaxaca, Mexico, denouncing the vile torture of the teenage son of Dr. Arturo Villalobos (second from right), a prominent leader of dissident health workers and spokesman for the Grupo Internacionalista.  (Photo: Newsweek en español)

Around noon on Monday, May 7, thugs entered the house of comrade Dr. Arturo Villalobos Ordóñez and his wife, Patricia Méndez Jiménez in Oaxaca, Mexico. Both are prominent oppositional activists in the movement of health workers against government “reforms” that are gutting Mexico’s public health system. Not finding our comrade there, the attackers brutally tortured and beat the couple’s adolescent son, Nizván, and proceeded to ransack the house. As the thugs left, they slashed him and struck the teenager’s head, leaving him unconscious. When his mother returned home she found her son semi-conscious. Nizván is currently in the hospital recovering and undergoing tests for injuries to the head (in addition to the blow, his head was submerged in water) and neck (from being dragged by a rope). Arturo Villalobos is a well-known spokesman in Oaxaca for the Grupo Internacionalista, Mexican section of the League for the Fourth International, and a member of the GI’s Executive Committee. In addition, the attackers asked the whereabouts of two other family members who are also members of the GI. The assault was clearly a political act of repression directed against the GI. Earlier, in February, menacing phone calls had been received by family members and in March there was a break-in at the house. This followed the arrest of Paty and an arrest order against Arturo on trumped-up charges in July 2017, and threats of legal action a year earlier.

A formal denunciation of the crime is being made, and an investigation by human rights groups is underway. A press conference denouncing the vicious attack was held this morning at the headquarters of Oaxaca’s militant teachers union, Section XXII of the CNTE (National Coordinating Committee of Education Workers), with which the dissident health workers and the Grupo Internacionalista have worked closely during struggles over the last two years. This coming Thursday, May 9, Section XXII and health workers have called a mobilization in the city of Oaxaca to denounce the vicious attack.

We are calling on comrades and friends to launch an urgent campaign of workers solidarity with Dr. Arturo Villalobos and his family and of denunciation of this vile act of political repression. Declarations by unions would be particularly welcome.

We do not know at this time who perpetrated this heinous assault. Recently, our comrade Arturo was a main leader of a two-month work stoppage which the corporatist SNTSA (Health Department Workers), a pseudo-union which acts as labor police for the government, sought to shut down. But as the attached press statement by the Grupo Internacionalista notes, whoever carried out the attack, everything points to one conclusion: fue el estado (it was the state), as protesters chanted over the 2014 disappearance of 43 teachers college students from Ayotzinapa.

BACKGROUND: In addition to the information in the GI press release, it should be noted that the comrades have been targets of state repression going back to the Oaxaca uprising of 2006, when Arturo treated many protesters attacked by police. Ten years later, in 2016, Dr. Villalobos organized and led the courageous action by Oaxaca doctors in defying a police blockade to provide medical assistance to the surviving victims of the police massacre in Nochixtlán, Oaxaca on 19 June 2016 that left eleven dead during the militant three-month teachers strike. Not long after, the threats of legal action by the state attorney general began.

Also significant is that fact that the Grupo Internacionalista in Oaxaca was recently attacked by supporters of Morena (Movement of National Regeneration), the bourgeois populist party of Andrés Manuel López Obrador. During the May Day march last Tuesday, Morena activists attacked the GI banner that called for opposition to all capitalist parties, including the ruling PRI, PAN, PRD and Morena. There are various reports of cooperation by the PRI state government of Alejandro Murat and Morena in the lead-up to July elections. 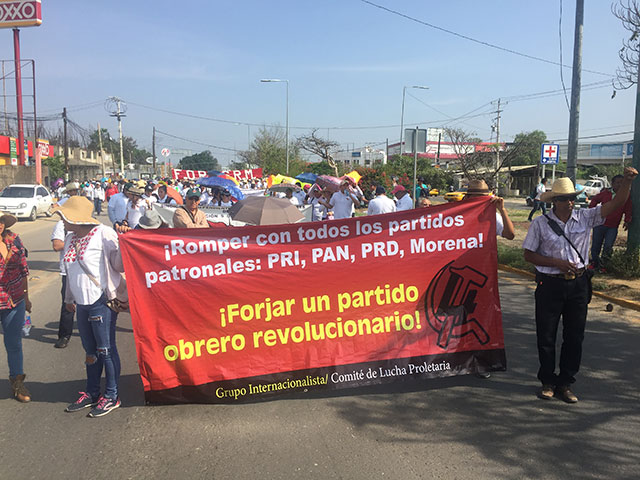 The Grupo Internacionalista banner that was attacked on May Day by supporters of Morena (Movement of National Regeneration), the bourgeois populist party led by Andrés Manuel López Obrador.  (Photo: Revolución Permanente)

A sample resolution is given below:

MOTION OF SOLIDARITY WITH ARTURO VILLALOBOS AND HIS FAMILY

Whereas, on May 7, 2018, thugs entered the home of Dr. Arturo Villalobos and Patricia Méndez in Oaxaca, Mexico where they tortured and beat the couple’s adolescent son Nizván, leaving him unconscious; and

Whereas, Dr. Villalobos is a prominent opposition leader among health workers and recently was a leader of a two-month work stoppage by Oaxaca medical personnel against the Mexican government’s privatizing “reform” of the public health system; and

Whereas, Dr. Villalobos has repeatedly been the object of threats of repression and arrest orders ever since leading the action of doctors and other health workers who defied a government cordon to bring medical assistance to the over 100 surviving victims of the June 19, 2016 police massacre in Nochixtlán, Oaxaca during a hard-fought teachers strike; and

Whereas, from the 2014 “disappearance” of 43 teachers college students of Ayotzinapa to the massacre of residents of Nochixtlán to this latest attack on a teenager, behind it all one can see the hand of the Mexican government; and

Whereas, Arturo Villalobos is a prominent spokesman in Oaxaca for the Grupo Internacionalista, which has been the object of physical aggression for its opposition to all parties of the bosses, particularly during the current election campaign; therefore be it

Resolved, that _____________________________ joins with trade-unionists, left and social activists and defenders of democratic rights in denouncing the vile crime perpetrated against 16-year-old Nizván Villalobos Méndez, and declares our militant solidarity with Dr. Arturo Villalobos and Patricia Méndez.  An injury to one is an injury to all!

PRESS BULLETIN OF THE GRUPO INTERNACIONALISTA/MÉXICO 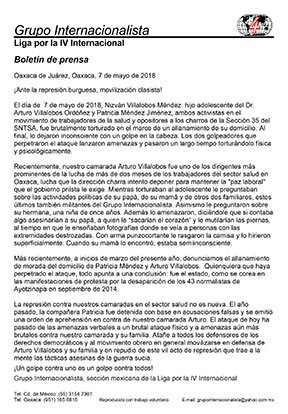 Click on image for print version of press release in Spanish.

Today, 7 May 2018, Nizván Villalobos Méndez, the adolescent son of Dr. Arturo Villalobos Ordóñez and Patricia Méndez Jiménez, both activists in the movement of health workers and opponents of the charros (corporatist government-imposed bureaucrats) of the SNTSA (Union of Health Department Workers), was brutally tortured in the course of a ransacking of their house. As the attackers departed, they left the youth unconscious with a blow to the head. The two thugs who perpetrated the attack made threats and spent a considerable time torturing the youth, physically and psychologically.

Recently, our comrade Arturo Villalobos was one of the most prominent leaders of the two-month struggle of workers in the health sector in Oaxaca, a struggle which the corporatist leadership sought to bury in order to maintain the “labor peace” demanded by the government of the Institutional Revolutionary Party (PRI) [which controls both the federal and Oaxaca state governments]. While they were torturing the teenager, they asked about the political activities of his father, of his mother and of two other family members, who are also members of the Grupo Internacionalista. They also asked him about his sister, an eleven-year-old girl. In addition they threatened him, telling him that if he said anything they would kill his father, would “rip out his heart” and would mutilate his legs, meanwhile showing him photos of people with their extremities crushed. Then with a sharp blade they slashed his shirt and wounded him superficially. When his mother found him, he was semi-unconscious.

Recently, at the beginning of March of this year, we denounced the breaking and entering of the domicile of Patricia Méndez and Arturo Villalobos. Whoever carried out these attacks, everything points to one conclusion: it was the state, as demonstrators chanted in protests over the “disappearance” of 43 teachers college students from Ayotzinapa in September 2014.

The repression against our comrades in the health workers sector is not new. Last year, compañera Patricia was arrested on the basis of trumped up charges and an arrest order was issued against our comrade Arturo. Today’s attack has gone from verbal threats to a brutal physical attack and even more brutal threats against our comrade and his family. It is up to all defenders of democratic rights and the workers movement in general to mobilize in defense of Arturo Villalobos and his family and to denounce this vile act of repression which brings to mind the murderous tactics of the dirty war.

Grupo Internacionalista,
Mexican section of the League for the Fourth International