For a Socialist Federation of the Near East!

U.S./NATO Imperialists Get
Your Bloody Claws Off Syria! 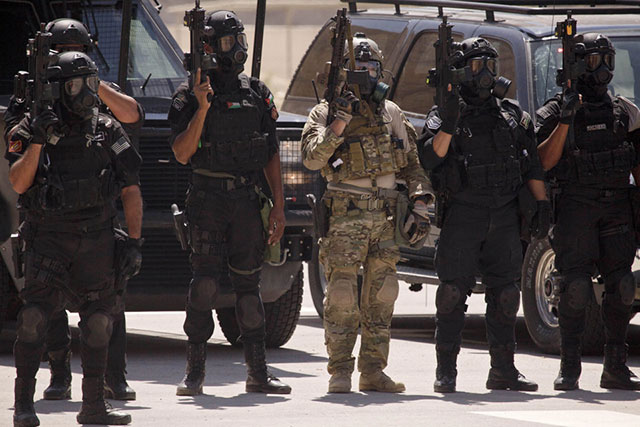 U.S. special forces train commandos from Jordan and Iraq in chemical war-fare during “Eager Lion” exercise in Jordan, June 2013. Washington falsely accuses Syria of using chemical weapons when U.S. has largest stockpile in the world, and has used them. U.S. currently has over 700 troops in Jordan manning Patriot missiles and F-16 fighter jets. U.S. out of the Middle East! (Photo: Maya Alleruzzo/AP).

JULY 9 – For the past two years, Syria has been engulfed by an upheaval that began as protest demonstrations, quickly morphed into a sectarian insurgency and became a communal civil war that is now spilling over to neighboring Lebanon and Iraq. The authoritarian regime of Bashar Assad, based on the minority Alawite population with support from other religious minorities and much of the Sunni Muslim bourgeoisie, sought to quell the unrest with hard-fisted repression, but failed. Within weeks, Islamist forces launched armed attacks. From early on, the U.S. and its regional allies have been aiding and advising the insurgents, but particularly since the regime has regained ground, pressure is building for the imperialists to escalate.

We’ve seen all this before. As in the lead-up to the 2003 U.S. invasion of Iraq, there is a hullabaloo in Washington about Syria’s chemical weapons. What hypocrisy, coming from the imperialist power that has, by far, the biggest stockpile of atomic, biological and chemical weapons in the world! And which has used them: nukes on Hiroshima and Nagasaki, napalm on North Korea and Vietnam. As in the build-up to the 1998 U.S./NATO war on Yugoslavia, the Syrian government is accused of massacres and torture. What about U.S. electro-shock torture and waterboarding at Guantánamo, Abu Ghraib and Bagram AFB in Afghanistan?

For that matter, what about the CIA and Pentagon program of selective assassination by drones, in Afghanistan, Pakistan, Yemen and elsewhere, which has murdered upwards of 5,000 people, including 200 children in Pakistan alone, all approved by Barack Obama? Meanwhile, U.S.-backed “rebels” behead Syrian soldiers, eat their internal organs on video, vow to slaughter Alawite “apostates” after driving tens of thousands of Alawite, Christian and Shiite Syrians from their homes, and the U.S., U.N., NATO justify their imperialist sanctions and threats of bombing with accusations of “ethnic cleansing”!

Two months ago, the United States and its European NATO imperialist allies were pushing for a “Geneva 2” conference together with Russia to negotiate a “political settlement” to the conflict. The Syrian government has agreed to attend, the fractious insurgents have not, and are mired in internecine squabbling with competing coalitions vying for leadership. Lately, as the Assad regime has steadily driven the Islamic insurgents out of Qusayr, Homs, Dara’a and Damascus suburbs, the West has cooled on a conference.

But what “political solution” is possible? Since the armed opposition rejected the call of the first Geneva Conference on Syria in June 2012 to end the violence and hold general elections, and since their demand (and that of the imperialists and their Gulf allies) is for the destruction of the Assad regime, which substantial sections of the Syrian population back, if only for self-preservation, the diplomatic horse-trading will be one more dead-end.

Then the issue will be posed starkly of whether Washington and its North Atlantic Treaty Organization imperialist allies will unleash their murder machine as they did in Libya. That would change the character of the conflict from inter-communal fighting to a battle against U.S./NATO intervention. The scale of the slaughter would mount sharply. Many Syrians who have so far sat the war out would side with the government, fearing the destruction of the country. And any genuinely revolutionary Marxist, while giving no political support to the Assad regime, would stand foursquare for the military defense of Syria against imperialist aggression.

The unrest in Syria was sparked by the January-February 2011 uprisings in Tunisia and Egypt which became known as the “Arab Spring.” U.S. imperialism was caught off-guard as its leading regional “assets” were toppled, yet it quickly recovered and seized upon an armed uprising in Libya to eliminate the erratic Qaddafi with NATO firepower. U.S. president Barack Obama patted himself on the back for having achieved success without putting American “boots on the ground,” while Libya was devastated, and is now beset by warring Islamist gangs.

But Libya was essentially a one-man dictatorship, while the Assad regime has substantial political and military backing of sectors that vow to fight to the end, fearing rightly that they would fall victim to victorious Islamist insurgents. A rebel “victory” due to imperialist arms in Syria, even if possible, would lead to indiscriminate slaughter of Alawite, Shiite, Christian and other ethnic-religious minority groups and likely unleash years of communal warfare like the Lebanese civil war of 1975-1990.  More probable is the splntering of the country with the leaders of the more than 80 different insurgent militias becoming regional warlords. And in any case, it could set off a regional war involving Israel and Iran. Already the fighting has spilled into Lebanon, where Sunni Islamists have attacked Shiite areas. Zionist Israel has twice bombed Syrian government installations.

In mid-June after a White House review, the U.S. let it be known that it would directly supply arms to Syrian rebels, instead of indirectly as it now does through Qatar and Saudi Arabia via Jordan and Turkey, though only enough to keep the Islamic insurgency alive. But even heavier arms would have little military impact except for surface-to-air missiles which Washington is reluctant to supply as they would surely end up in the hands of hard-line Islamists linked to Al Qaeda.

The U.S. government has been split over how heavily to intervene, as it has been since the start of the fighting in mid-2011. Official Washington, Democrats and Republicans alike, would like to strike at Syria in order to land a blow against its backers in Iran, the nemesis of U.S. ally Israel. While gung-ho Republicans like John McCain, who recently snuck into rebel territory in northern Syria where he hobnobbed with Al Qaeda-linked jihadis, and Democratic warhawks like Hillary Clinton want to go all the way, Barack Obama hesitates for fear that an insurgent victory could turn into a quagmire, or worse.

Meanwhile, the mass media have kept up a barrage of hysterical warmongering pro-rebel coverage of the civil war in Syria. Liberals and conservatives alike clamor for Western intervention in the name of protecting human rights. Sensationalist and outright lying articles simply repeat what the insurgents’ Saudi-funded media operation feeds them via Skype. It reeks of the “yellow journalism” of the Hearst press hailing Cuban rebels while pushing for (and in 1898 getting) a U.S. invasion to “free Cuba” from Spanish colonialism. The New York Times on Syria today is as credible as Hitler’s Völkischer Beobachter on alleged Polish massacres of ethnic Germans in 1939, preparing the way for the Wehrmacht to launch World War II.

Reflecting the imperialist propaganda is a host of leftist camp followers supporting the Islamist gangs in the name of a supposed “Syrian Revolution” that exists mainly in their heads and in the Internet blogosphere. The same social democrats1 pulled the same deception in Libya, calling to support pro-imperialist rebels portrayed as the “Libyan Revolution” – a total invention – while claiming to oppose NATO intervention. In Syria, there were initial largely secular mass anti-government demonstrations, but they were soon eclipsed by and subordinated to the armed Islamists. With their sweet talk of (bourgeois) “democracy,” these reformist leftists are acting as cat’s paws for Islamist butchers and imperialist intervention.

The stark fact is, as the New York Times (27 April) reported in one of its few half-way objective articles, “Nowhere in rebel-controlled Syria is there a secular fighting force to speak of.” This is confirmed by a number of detailed studies of the armed Syrian opposition by imperialist think tanks (see the Swedish Institute of International Affairs, Syria’s salafi insurgents: The rise of the Syrian Islamic Front [March 2013]). Moreover, all of the insurgents have engaged in indiscriminate attacks, from car bombs in minority neighborhoods of Damascus to the mass expulsion of minority populations. The occasional protests by secular oppositionists at universities carry no military weight, and to the extent that they are linked to or support the Islamist opposition are reactionary politically.

The key to cutting through the Gordian knot of the Syrian civil war is the mobilization of the working class throughout the region, particularly the millions-strong Turkish proletariat, under revolutionary communist leadership. The recent upheaval against the repressive Islamist government of Tayip Erdogan indicates that the potential exists. A workers mobilization would bring down the NATO Islamist Erdogan and the authoritarian Assad regime and obliterate the Islamic terrorist gangs. By uniting the toilers across arbitrary national borders, it would also overcome the divisions imposed by the imperialists in the Sykes-Picot protocol at the end of World War I. Among other things this would open the way for a united socialist Kurdistan. In the meantime, revolutionaries recognize the right of self-defense by minority communities threatened by the Sunni Islamist gangs.

The dire situation in Syria today, and throughout North Africa and the Middle East, emerged from the collapse of Stalinism and Arab nationalism, which opened the way for religious fundamentalism and sectarian/communal conflicts, often exploited by imperialism. Many leftists gave up hope of socialist revolution so long ago that they habitually tail after whatever current is popular, from Khomeini to Hezbollah to the Muslim Brotherhood. In doing so they not only betray the working masses, they prepare their own demise. Should the Syrian insurgents prevail, it would mean hideous persecution of religious minorities and women while the left would at best be marginalized and repressed, as in Egypt today, or exterminated, as in the mullahs’ Iran.

To replace bonapartist “secular” regimes like Assad’s and to bar the way to Islamic reaction and communal slaughter, authentic communists who adhere to the program of Lenin and Trotsky’s Bolsheviks fight for workers revolution throughout the Levant, from the Mediterranean to Central Asia. The only framework in which the conflicting claims of the myriad nations, nationalities, peoples and religious minorities, from Kurds and Alawites to the Hebrew-speaking population in Palestine can be equitably resolved is a socialist federation of the Middle East. This is what the League for the Fourth International fights for.  ■