Bad Apples, Broken Windows,
and Other Myths About the Police

There is lots of talk today about the police and race in America, prompted by the continued killing with impunity of unarmed black men, women, and children by cops in Ferguson, Chicago, New York, Baltimore, Cleveland, and elsewhere. Some of these legalized murders have been caught on video for all to see. This national “conversation” will not change the fundamental injustice of the capitalist system’s racist enforcement on the streets. Even the large and inspiring protests in city after city against transparent murderous police brutality and its cover-up in cop-rigged grand-jury and court systems will not result in the justice that so many idealistic young protestors desperately desire and demand. 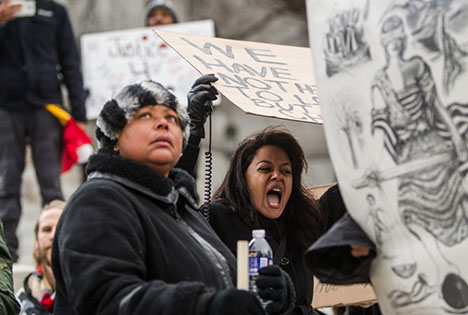 The goals of the protestors are undermined by a number of dominant liberal illusions that support the racist status quo. First is the common sense story that “of course, there are good cops and bad cops.” There is hardly a person-on-the-street interview or a pundit or politician on TV who does not refer to this distorted individualized construction of the situation. It is a convenient fable that shifts the political focus away from the role of the police as an armed institution of the capitalist state apparatus to a consideration of individual attitudes. This logically leads to ideas of getting rid of “bad apples,” improving police training, establishing “community policing,” etc.

Of course, it is often the case that cops are personally racist, it’s part of cop culture that views the black population as “perps,” “animals” and at least proto-criminals. Darren Wilson, the cop who shot unarmed Michael Brown in Ferguson, for instance, said he saw Brown as a “beast.” This is a linguistic holdover from chattel slavery. But the most revealing statement in Wilson’s released testimony was that he knew he was doing his job. Doing what he was supposed to do, trained to do. This is basically what all the cops say when they are perfunctorily called upon to explain why they shot or beat someone. Cops understand the great leeway they have legally. The oppressed bear the suffocating weight of the institutional barrel that contains plenty of bad apples, but mainly all kinds of apples that are just doing their jobs. 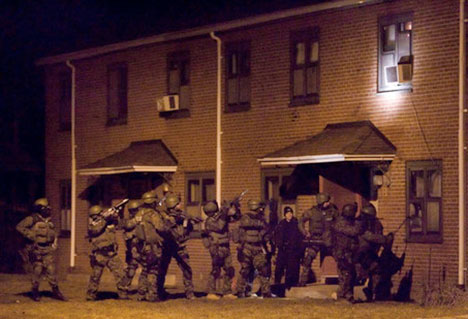 The fundamental job of the cops is to maintain brutal social control over the urban ghetto. They are supported in this purpose by the myth of “broken windows policing.” According to this “theory” cops are charged with enforcing “quality of life crimes” such as “loitering,” public drinking and begging. This was the original rationale for the racist “stop and frisk” policies of the New York Police Department. It was certainly the motivation in the NYPD’s strangling to death of Eric Garner in Staten Island. Garner was on the street selling “loosies” – single cigarettes. Of course “broken windows” is enforced only in poor, black and Latino neighborhoods. The famous dictum of Anatole France applies here: “The law in its majestic equality, forbids the rich as well as the poor to sleep under bridges, to beg in the streets, and to steal bread.”

The liberals’ emphasis on a racially diverse police force is a result of the idea that racism is a personal and psychological characteristic rather than a structural buttress of U.S. society. But in Baltimore, for instance, where the cops’ “rough ride” killed Freddy Gray, the mayor, the prosecutors and the entire criminal justice establishment are African American. NYC has one of the most diverse police forces in the world. As a result of decades of protest, a majority of NYC’s 35,000 cops are African American, Latino, or Asian. That didn’t help Amadou Diallo, Abner Louima, Sean Bell, Eleanor Bumpers, Eric Garner and many others.

Today the cop who beats the kid in his hoodie, or stops, frisks, harasses and drives the kid into the criminal data base is a lot more likely to look like a member of the “community” than the racist PBA head, Patrick Lynch, who lives up to the older cop stereotype. But Lynch’s philosophy dominates cop culture and sets the real informal initiation rules for becoming a conscious agent of “law and order” in capitalist society. In defending the interests of capital, the “community” that cops represent is the “blue community” of occupation and oppression. 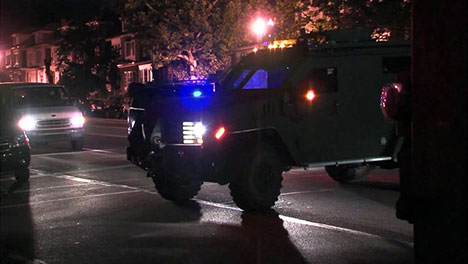 For the ruling class the problem is one of public relations: how to get the oppressed to trust the cops. The more far-seeing capitalist rulers know that their supremacy depends upon efficient control of the oppressed. That is why liberals are wringing their hands over the “lack of trust between police and communities of color.” But for the cops the problem is one of fear: who owns the streets?

Liberal illusions divert attention from the historically developed role of the capitalist state as an instrument of racist and class control and coercion. Besides the constant drumbeat for generalized gun control, we now also hear references to the implicit racism held throughout the U.S. population. Social science research has certainly demonstrated that this is widespread. As a legacy of slavery and ghetto compaction, the dominant capitalist ideology perpetuates the perception that black bodies are suspicious and dangerous. In this view the murderous cops are just like any American except that they have a gun.

Everyone is guilty in this alibi for intentional cop terror. A cop feels threatened when he sees a black man holding a toy rifle in the toy section of a Walmart, and shoots him dead (in a suburb of Dayton, Ohio in August 2014). Even a recent New York Times (30 December 2015) editorial notes that the shooting of Tamir Rice – a young boy with a toy gun on a playground – would not occur “in just about any middle-class neighborhood in the country.”

But the focus on the fact of widespread implicit racism tends to sidestep the role of the cops as lethal enforcers of the racist status quo. The cops’ rules of engagement are different. The racism of the cops is not simply implicit – it is central to their historically developed function as the truncheon of the capitalist state against the population of impoverished ghettos. 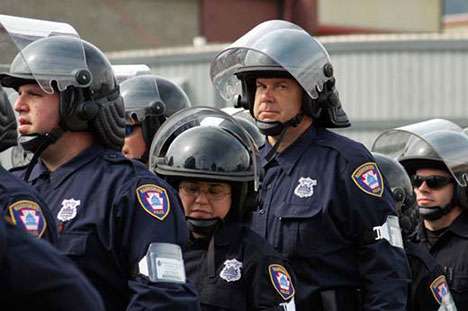 Many of the youthful protesters have inherited the debilitating illusion that the federal government can be relied upon to reform the local, militarized and out-of-control cops. Their illusory hope that the federal government will right the wrongs of state and local authorities is a holdover from the civil rights movement when national political opposition to de jure legal segregation did temporarily ameliorate the most egregious examples of Southern legal apartheid. At the same time, the feds occupied cities like Little Rock and Birmingham to put down black resistance to the racist nightriders.

So today, in response to civil rights complaints, the U.S. Department of Justice (DOJ) comes to town pretending to reform and modernize police practices. The DOJ has issued reports on Ferguson, Cleveland, Chicago and elsewhere. We have seen decades of “agreements” between local cops and the DOJ promising to reform the police in Detroit, Baltimore, Los Angeles, New Orleans and other major cities. In the last two decades DOJ has launched 67 civil rights investigations of police departments. It doesn’t work. It can’t work.

As the Washington Post (“Forced Reforms, Mixed Results,” 15 November 2015) reported, police departments get new equipment and lots of money, but cop violence often gets worse. The Post reported that in the ten cities where they investigated DOJ agreements, not one showed a decrease in the “use of excessive force.” In five police departments excessive use of force stayed the same, and “in five of the 10 police departments for which sufficient data was provided, use of force by officers increased [our emphasis] during and after agreements.”

It’s the same government that runs the torture prison at Guantanamo Bay where prisoners are held for years without charges and force fed. There is no accountability for torturers at the federal level – not one torturer, or the lawyers who justified it legally, or the psychologists who consulted on it, will ever face charges. As President Obama said in his home-spun way, “We tortured a few folks.”

Taken together these illusions generate an ideological fog that makes it nearly impossible for many young protesters to recognize the essential materialist class character of the state – born out of irreconcilable class conflict – and the institutions that embody and carry out its coercive purpose. In the United States, where racism is deeply baked into the development of capitalism, that coercion is necessarily racist. It is the entire barrel – the structure of capitalist class justice ‍–that is rotten to the core. 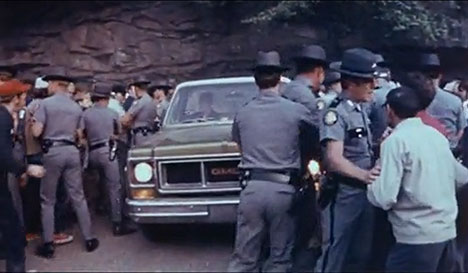 Which side of the class line are you on? Harlan County, Kentucky: “there are no neutrals here.” Cops defend coal bosses, herding scabs through mines’ picket lines during 1976 strike.
(Barbara Koppel, Harlan County U.S.A.)

These illusions, particularly as expounded by the Democratic Party, overshadow the current protest movement because of the weakness of the U.S. left and the dominance of middle-class politics in U.S. political life. The bloody class line between cops and workers has been a lot clearer in Appalachian mining towns like Harlan County, for instance, where generations of workers have fought the bosses’ gun thugs and cops. They posed the proverbial and sometimes musical question, “Which Side Are You On?” Everybody in town understood the social and political role of the cops.

There is also clarity on militant picket lines – workers’ necessary tool for organized survival – where the cops try to herd the scabs through the pickets. It’s easy for strikers to see that all the cops are following orders. “Good cops” and “bad cops” are part of the same strikebreaking armed force. In black ghettos across the globe where the cops regularly occupy and “control” the population through brutal harassment bordering on terror, and often legalized murder, there is little confusion about the cops’ social function.

But among the liberal and reformist left, the role of the cops has been obscured by loyalty (sometimes unstated) to the capitalist state and an individualist ideology that supports it. Sometimes this loyalty is primitively expressed as the false assumption that cops are “workers in uniform” – part of the “99 percent.” Sometimes the justification can be sophisticated and theoretical. But by creating illusions that the police could somehow “serve the people” the result is to divert struggle into a dead end of attempts to reform the unreformable. Everywhere and always, the political stance toward the cops is the touchstone that defines allegiance or opposition to capitalism and its state ■

See also: The Frame-Up of Corey Walker
Whose Life Is On the Line? Cop Stats
Jim Crow Justice and the Capitalist State