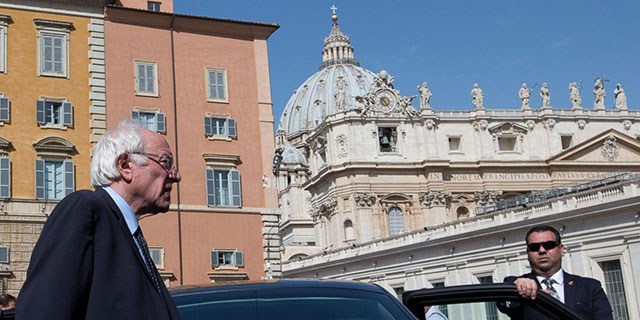 But, of course. In preparation for Bernie Sanders’ no-photo-op pope-meet-and-greet, “Around 5:30 p.m. Friday, the conference’s business ended and Mr. Sanders made an appointment for dinner at the Casa Santa Marta with his foreign policy adviser, Jeffrey D. Sachs, the economist and a fellow conference participant” (“ Bernie Sanders Meets With Pope Francis,” New York Times, 17 April).

That’s right, the very same Jeffrey Sachs who designed the post-counterrevolution “shock treatment” in Poland. Also in Bolivia together with future president “Goni” Sánchez de Losada, where it led to tens of thousands of workers fired and brutal anti-union repression. And yes, the same top capitalist privatizer who made a cameo appearance at Occupy Wall Street to spread his gospel of liberal neoliberal economics.

Check it out: “What the Hell Was Economic Hit Man Jeffrey Sachs Doing at Occupy Wall Street?” Revolution No. 9, November 2011.

According to the Times’ fly-on-the-wall account, Bernie and Jeffrey were dining with “Bishop Sánchez Sorondo and Cardinal Óscar Andrés Rodríguez Maradiaga of Honduras, the pope’s right-hand man and one of the Vatican’s top power players.” Conversation ranged over “the Church and its history, about Honduras and foreign policy.”

Ah yes, the ineffable Cardinal Rodríguez, the very same man of the cloth who was one of the “top power players” in Honduras in engineering the 2009 coup (overseen by then U.S. Secretary of State Hillary Clinton) that ousted President Manuel Zelaya, accusing Zelaya of hobnobbing with Venezuela’s Hugo Chávez. That, Rodríguez’ presidency of Caritas International and his contacts with the International Monetary Fund and World Bank made him a leading papabile (candidate to become pope) in the College of Cardinals. Definitely a player.

For Clinton’s role as godmother of the Honduras coup see the articles in The Internationalist No. 30, November-December 2009.

It turns out that earlier, then Bishop Rodríguez Maradiaga was accused in 1982 by a priest of being complicit in the hundreds of disappearances in Honduras. In particular, he was implicated in the 1980 Río Sumpul massacre of at least 300 peasants, including women and children, who had crossed into Honduras to escape the bloodbath going on in El Salvador. In addition, he shut down church campaigning against repression. The priest, who fled to Mexico, said that Maradiaga seemed “more like a colonel without epaulets than a pastor.” See http://carlosagaton.blogspot.com/2013/02/cardenal-oscar-andres-rodriguez.html

But then, it will be recalled that Argentine priests accused a certain Bishop Jorge Bergoglio, then Superior of the Jesuit province, of handing over priests to the military junta for torture in 1976, during the Dirty War which was undertaken at the urging of Henry Kissinger, a Hillary Clinton favorite. (His defense was that he didn’t imagine they would be tortured.) Bergoglio met with junta chiefs Videla and Massera, and he was also accused of complicity in the stealing of children of leftists and human rights campaigners who had been arrested and tortured. See http://www.dailykos.com/story/2015/3/23/1372717/-Pope-Francis-and-the-Dirty-War-Part-I.

Bergoglio, of course, is now the superstar pope Francis. ■