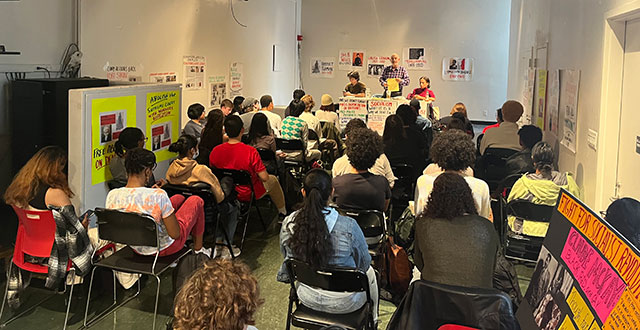 October 25 Internationalist Club forum at Hunter College drew 50 students for lively discussion on "Socialism: What It Is and Why We Fight for It."   (Internationalist photo)

The following leaflet by the CUNY Internationalist Clubs was issued on November 1.

On October 25, the Hunter Internationalist Club held a forum on “Socialism: What It Is and Why We Fight for It.” With about fifty students attending, discussion on the need for socialist revolution was animated and wide-ranging. The following is part of one of the presenta­tions, edited for publication.

In June of this year, we watched a fundamental right stripped away before our eyes: the right to abortion, which was taken away from millions of people when Roe v. Wade was overturned. For many, this was the first time they had witnessed such a thing. Others lived through the time when abortion rights were won, and now once again find themselves living in a time when it’s basically being illegalized for a big part of the U.S. population. And for doubly and triply oppressed parts of the working class, the attack on abortion rights hits even harder. It is a racist attack on our rights.

For us here in New York, where abortion is still legal, getting one costs an arm and a leg if you don’t have insurance or are on public assistance. Around the country, many people were left wondering what to do, when the Supreme Court, that undemocratic, unelected body of judges who keep their jobs for life, got to make the final decision on people’s right to decide whether or not to give birth to a child.

For us, the fight for the right of women or any pregnant person to get an abortion – for free, unrestricted abortion on demand – is part of the struggle to achieve the real and full emancipation of women and all the oppressed. You can’t have socialism without the liberation of women, and you can’t liberate women without a socialist revolution. The struggle for socialism, and the struggle for women’s liberation which is intimately connected to it, is based on a particular type of politics: class politics, working-class politics, revolutionary politics. This is the opposite of bourgeois politics. 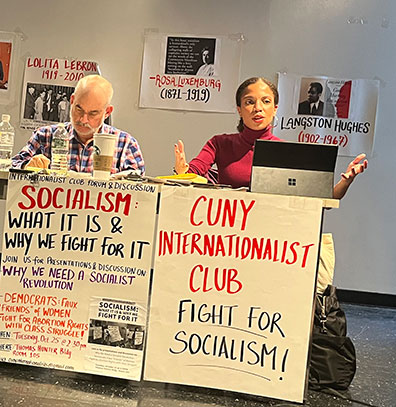 Key to that is the basic Marxist principle of fighting for the political independence of the working class. This is why we fight to free the working class and oppressed from domination by all capitalist parties, which in the United States in very large part means breaking the chains that have long subjugated the workers and oppressed to the Democratic Party, and still do. We call to break with the Democrats and all capitalist parties and to build a revolutionary workers party that would actually fight in the interests of the working class.

We don’t just say that in between elections. We stick to that principle even when a lot people really don’t want to hear it, like during midterm elections, which are right around the corner. The Democrats, and Trump and his lackeys in the Republican Party, all represent capitalism, which means imperialism and war; it means oppression and poverty; it means racism and the oppression of women. The Democratic Party has sought women’s votes by pointing to Republican opposition to abortion. Yet even when Democrats have controlled both houses of Congress and the White House early in the administrations of Bill Clinton, Barack Obama and now Joe Biden, they have never even pushed through bills that would enact the (limited) abortion rights contained in the Roe v. Wade decision.

To fight for abortion rights, to fight for women’s liberation, is a question of power. This means – and this is a key aspect of genuinely socialist politics – unchaining the power of the workers and the oppressed.

This is the power that needs to be brought into the fight for abortion rights on a massive scale. That’s what we’ve been talking about when we coined that slogan calling to fight for abortion rights with class struggle. To carry this out means fighting for a program that connects the fundamental daily needs and struggles of the working class to taking power in a socialist revolution.

What the CUNY Internationalist Clubs aim to do is win students over to that struggle. This means telling the truth: that the institutions and politicians of the ruling class are not our friends. The struggle for abortion rights is a struggle against them. Revolutionaries explain that workers and the oppressed need to rely on their own power, and to have absolutely no confidence in the people who profit off of their exploitation and oppression. Groups that practice what Marxists refer to as opportunism and reformism have an opposite approach, which obscures the truth and stands in the way of effective struggle.

Part of our job as revolutionaries is to honestly address these issues too, since political differences have real effects, especially when the stakes in the struggle are high. You can see that in a lot of different struggles, including workers’ strikes and in struggles against racist police brutality, for women’s rights and in many other cases.

We had a local example of such differences in a very concrete way here at Hunter College quite recently. Who here went to the protest on October 6? It was publicized as a walk-out and rally in defense of abortion rights, so we went – actually the Internationalist Club brought out the largest single organized contingent there. But we did so under our own revolutionary slogans. This was doubly important since the reformist grouping calling the protest, CUNY for Abortion Rights (“C4AR,” a coalition initiated by the Left Voice group, which sponsors the Bread and Roses organization), did so with a flier whose demand was to “pressure CUNY admin to take a stand on abortion.” This remained posted up all over the Hunter campus for the two weeks leading up to the event, and after it.

So it was important to counteract that kind of call for illusions in an institution that carries out repression against the students and workers of CUNY. And it was important to link this to some of the basic aspects of what genuine socialist politics is – and isn’t – which is really important given how much miseducation there is about what leftist politics is about. We put out a leaflet explaining how that demand, for the bosses of CUNY to “take a stand on abortion,” exemplified the overall reformist approach of spreading illusions in institutions and politicians of the capitalist ruling class, and seeking alliances with them. [See “How to Fight for Abortion Rights – Compare and Contrast.”] In our paper Revolution, the CUNY Internationalists have also analyzed the history of class-collaborationist vs. revo­lu­tionary positions and approaches to the fight for abortion rights. This has important lessons for today, when reformists seek to revive a lot of what their predecessors did fifty years ago.

The fact is that the fight for abortion rights faces powerful enemies nationwide, and defeating them requires bringing out a stronger power: that of the working class. And this can’t be achieved when that potential power is subjugated and chained to the Democratic Party. If anything right now it is even more important than ever to underline that the Democrats, this government party of U.S. imperialism, administers and upholds the racist capitalist system in the United States while trying to lord it over the whole world.

This is the government party of U.S. imperialism that runs the big cities where police murder black people on a daily basis. That rips children away from their mothers at the border and puts them in cages. One U.S. war after another has been waged under Democratic administrations. Today their relentless drive for world domination, with their ever-escalating imperialist war drive against both Russia and China, poses the growing danger of World War Three.

Not one vote for the U.S. rulers and their system of exploitation, racism and women’s oppression. Not one penny or person for their imperialist wars – which must be defeated, part of the fight for inter­national socialist revolution. The fight for socialism, against this decaying capitalist system, is what we’re about. ■

Yet Again, Censorship Stands
in the Way of Struggle

At October 6 protests for abortion rights at Hunter and two other CUNY campuses, the CUNY for Abortion Rights coalition (C4AR, referred to above) invited protesters to attend a subsequent event, titled “All Out for Abortion Access! Organizing at CUNY and Beyond.” This publicly advertised meeting was held on October 15, the week after the protests and as a follow-up to them.

CUNY Internationalist activists wanted to bring our revolutionary views and program to the attention of participants in the October 15 event. Discussion and debate on different strategies is crucial, and this is very much the case when it comes to advancing the struggle for abortion rights.

However, the location chosen for the event – the People’s Forum (PF) – has a standing rule against the distribution of leftist literature. This rank anti-communist ban had already been used to keep the Internationalists out of an important CUNY organizing conference (which our comrades had in fact initiated) in 2019.1 To thus block free exhange of views and denature that 2019 adjunct organizing conference, the PF’s “#1 rule” was invoked, stating that no “outside” group could “pass out fliers, put them on the tables or sell newspapers. If anyone does, they will be removed from the space by staff immediately.” Now if on October 15 of this year that standing threat had been carried out against leftist activists inside the abortion-rights event (for giving out our fliers on abortion rights or our paper, for example), the example of such repressive measures being used against us reds would have been used to intimidate many other young activists at CUNY, and beyond.

Facing all of this, three young women comrades from the Internationalist Clubs went on October 15 to distribute our literature on the public sidewalk, outside the People’s Forum building. What happened then was that a PF employee came out onto the sidewalk, went up to the youngest of the three and demanded: “Are you holding a party paper? What group are you with?” Told that it’s the Internationalists, he stated that “we have a policy against party publications” and repeatedly insisted that “you can’t sell your paper” there – on the public New York City sidewalk.

Nobody came out from the building where the event was being held to protest any of this or defend the basic democratic right to distribute political literature. It should be noted that the C4AR coalition was initiated and is led by the Left Voice organization, which sponsors the Bread and Roses “socialist feminist” group. Left Voice is all too aware of the People’s Forum’s policy: it vociferously supported the ban on leftist literature being imposed on the 2019 CUNY organizing conference, as we have documented in our press. Now it chooses to have the recent October 15 event on abortion-rights organizing at CUNY at this same locale. It also held a prior conference, on “Labor for Reproductive Rights,” at the People’s Forum in July.

Censorship, bans on distributing leftist literature at organizing events (of CUNY activists!) – and the kind of disdain for the most elementary principles of workers democracy all this exhibits – can only harm the struggle for abortion rights. ■