A Question of Whose Class Interests Prevail 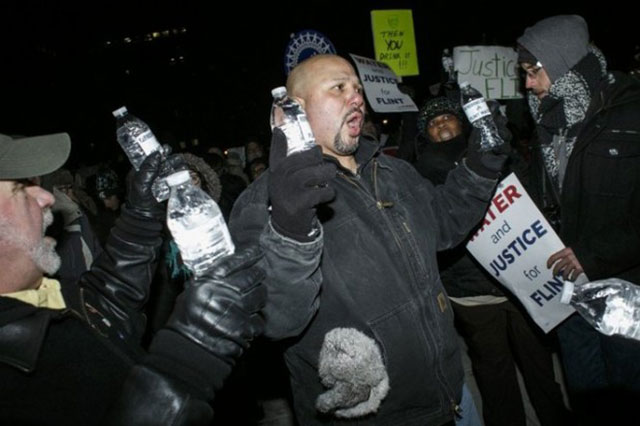 UAW Local 599 president Dan Reyes hands out bottles of contaminated Flint water outside Michigan state capitol January 19 during governor's “state of the state" speech. Workers should use their power to kick out “emergency management” dictators, break with Democrats and build a workers party.  (Sean Proctor/Flint Journal)

The Spring of 2014 was the beginning of a nightmare for the residents of Flint, Michigan. At that time, the city emergency manager and the office of the Republican governor, Rick Snyder, decided to switch the water supply from Lake Huron to the Flint River. From the outset, the water of the Flint River was suspected of being unsafe and unfit for human consumption. Health officials were aware of the potential risks but remained silent until the end of 2015 when the scandal blew up. The bottom line is that the government tried to poison the residents of Flint, and behind it was barely disguised racism … and capitalist austerity.

The crisis that Flint residents are facing is a direct result of dictatorial control by appointed managers that have spread in Michigan in recent years. As filmmaker Michael Moore pointed out, “This is a racial crime. If it were happening in another country, we’d call it an ethnic cleansing” (Time magazine, 1 February). The facts are plain to see: Flint is a poor city and almost two-thirds of the population are struggling black families. When Flint residents noticed that the water provided to them was not safe to drink they notified authorities, who did nothing.  On the contrary, they turned their backs on the population and let them be poisoned.

Moore, who is from Flint, noted that this would never have happened in affluent white cities like West Bloomfield, Grosse Pointe or Ann Arbor. Who can be surprised at such racism when in the 21st-century United States, with a black president, where we witness videos of lynch-type murders of African American and Latino youth? Let’s not forget that capitalist America was founded on the genocide of Native Americans and the superexploitation of slaves imported from Africa in chains. Flint’s water crisis and the poisoning of its residents is not a natural disaster but a man-made catastrophe fueled by racial and class oppression.

The financial crisis that this grew out of was the result of the closing of a number of Flint auto plants in the 1980s, which cut the city’s population in half and devastated its tax base. Flint was the site of the historic sit-down strike against General Motors at GM’s Fisher Body No. 1 plant in 1936-37, which established the United Auto Workers (UAW) as one of the most powerful industrial unions in the country. Not only did GM exploit Flint auto workers, but it also helped poison the water with its industrial waste which made it into a toxic blend which city residents have been drinking for almost two years.

Mumia Abu-Jamal, the foremost class war prisoner in the U.S., pointed out in a radio message from behind bars that what General Motors did to the Flint River was a “crime of capital”:  “For decades GM throve on it, and then poured into it its chemical wastes and effluvium until it became the corrosive toxic brew that it is now.” Despite all the efforts of the racist, capitalist state to bury him, holding Mumia on death row for three decades and now denying him crucial life-saving medical care, they have not been able to silence the courageous “voice of the voiceless.”

Darnell Earley was appointed by Governor Rick Snyder as Flint emergency manager in 2014. Claiming it was necessary to save Flint’s precarious finances, Earley and the governor’s office switched the water supply in order to save $5 million in the first year. By continuing to poison Flint for nine years, they would rake in another $19 million. Flint residents and local media had complained from early on about the foul-smelling, sludge-filled tap water, but it was not until Dr. Mona Hanna-Attisha of the local Hurley Medical Center issued a report last September detailing that lead levels in Flint children had nearly doubled (and nearly tripled in high-risk areas), that the official wall of denial finally crumbled. 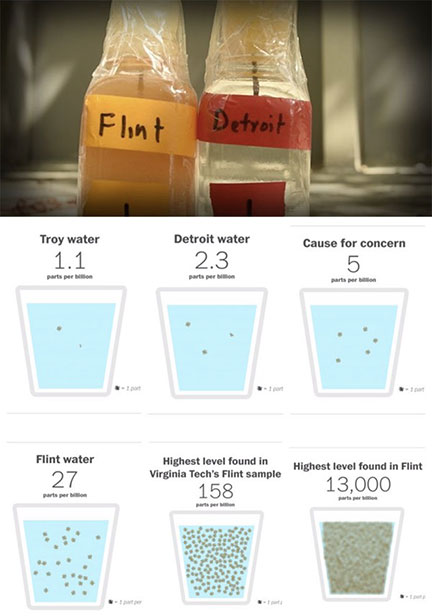 A special report by the Flint Journal (21 January) on “How Government Poisoned the People of Flint” lists facts that give you chills when thinking of the magnitude of the Flint water crisis. The poisonous water contains toxic concentrations of lead that may have claimed the lives of at least ten people who perished due to Legionnaires’ disease. According to the Environmental Protection Agency (EPA), drinking water should contain zero ppb (parts per billion) of lead. Detroit water has 2.3 ppb, but a research team from Virginia Tech took samples of household water in Flint that averaged more than 100 ppb. In a second study, the team found at least one house where the water contained over 13,000 ppb of lead (5,000 ppb or more qualifies it as toxic waste).

Old people and the young are among those most at risk. Lead poisoning can lead to severe and irreversible traumas: high blood pressure, abdominal pain, constipation, joint pain, decline in mental functioning, headache and memory loss are among the potential effects. Pregnant women may suffer premature births or miscarriages. Babies and young children suffer learning difficulties as well as developmental delay and hearing loss.

After almost three years of official denials that Flint’s drinking water was unsafe, by the end of 2015 the evidence was irrefutable, and the distribution of bottled water started.. On January 16, President Obama declared a state of emergency to provide a ridiculously low $5 million in federal aid. That’s less than a 20-days’ supply of bottled water for the 425,000 residents of the Flint metropolitan area, assuming that the federal government can get it at half price from the water profiteers. But the water mains are still contaminated. Meanwhile, residents have to scramble to get the free water provided by the state government and Red Cross, or buy water at the local stores (if they can find any), which of course is sold retail at high prices. 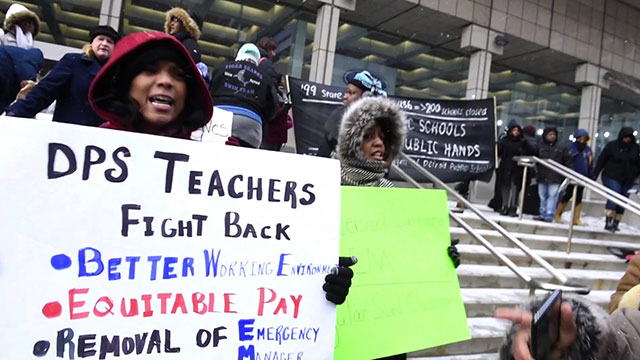 On January 20, Obama visited Detroit in conjunction with the North American International Auto Show held at the Cobo Center. That same day, Detroit teachers called for mass sick-outs to protest deplorable conditions in schools, including mold, broken windows, an infestation of roaches and even rats. There is also a lack of computers, and textbooks for teachers to work with are scarce. Some 100 schools shut down that day as teachers in Detroit denounced the fact that they have not had an increase in their wages in ten years.

There is a direct connection to Flint: the same Darnell Earley who brought in poisoned water, is today the state-appointed emergency manager of Detroit schools!

While Obama was inside the glitzy auto show eyeballing the latest models, teachers on the steps of Cobo Center called for a “full strike,” not just a one-day affair. The Detroit Free Press reported that the reaction of the state government following the massive sick-outs was to punish teachers with fines of a day’s pay and $5,000 for each additional day or partial day of missed classes. The following week, Detroit students decided to walk out of class in support of their teachers. They were hit with five-day suspensions. Students at Communications and Media Arts High School, Cass Tech and Renaissance High School walked out anyway, saying they were prepared to take the suspensions. Their complaints also included overcrowded classrooms.

Among those placed in grave danger in the Flint water crisis are black families, as well as white workers and many Latinos. There are an estimated 1,000 undocumented immigrants living in the Flint area, mainly from Mexico. According to a January 25 story on the Fusion network, a number of immigrants report that they have been denied the free bottled water as officials demanded driver’s licenses or state IDs, which they don’t have. Many immigrants are also extra-cautious in answering the door when Red Cross workers knock, knowing that this January the Obama administration carried out deportations of 2,000 people who had fled the violence in Central America.

Democrats and Republicans: Partners in Crime

Now the Democrats are trying to capitalize on the Flint crisis. Both Hillary Clinton and Bernie Sanders have visited the city, and on March 6 the two Democratic presidential primary candidates will hold a debate there. But the Democratic Party is also culpable. The regional director of Obama’s EPA sharply rebuked the Flint mayor when he wrote her last June asking for information about lead in the city’s water. He was informed in so many words that he would be told when they were good and ready, and not before. The EPA administrator has now resigned.

Neither the Democratic nor the Republican parties of the bourgeoisie work for the oppressed and the working people. Their job is to protect the interests of the capitalist class – the same class that poisoned people in Flint and that implements austerity measures that hit the children of the working class hardest, consigning them to under-funded schools, subjecting them to regimented and scripted education and with little prospect of good jobs. The CUNY Internationalist Clubs salute Flint residents and Detroit teachers for their courageous actions in confronting the state government. At the same time, we recognize that the problems they face go much deeper. 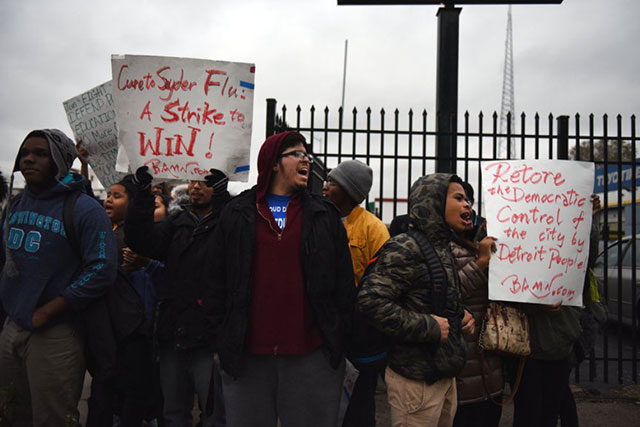 The use of state-appointed managers in Michigan cities is certainly a racist measure by the Republican-controlled state government. This is overwhelmingly directed at cities and towns with African American majorities, from Detroit and Flint to Benton Harbor. But these cities have been devastated by the collapse of Midwestern industry, which has been facilitated by the North American Free Trade Agreement but at bottom reflects decaying capitalism. Austerity policies have been implemented by both the major capitalist parties, Democrats and Republicans alike, under Barack Obama and Bill Clinton as well as George Bush and Rick Snyder.

We need to mobilize working people, the poor and oppressed against this system which is not only exploiting but literally poisoning us. The unions, which once were strong in Flint and Detroit, are a shadow of their former selves, crippled by a sellout bureaucracy that is beholden to the bosses, and didn’t lift a finger against the closing of the auto factories. But they are still the mass organizations of the workers. UAW Locals 598 and 599 in Flint have denounced the water crisis, helped distribute bottled water and called for demonstrations. But much more is needed.

The hard-hit population of Flint must not stand alone. The unions should take the lead in kicking out the “emergency managers” and their dictatorial control. Beyond such basic issues of democratic rights, the central issue in Flint is which class is in power. The civil rights movement made some legal gains, but the capitalist ruling class continues to segregate us in barrios and ghettos, creating inequality with its exploitation, and denying human needs such as water. Around the world, capitalist monopolies are seeking to privatize this basic resource, “branding” water and cutting off supplies to the poor of this necessity of life.

We can only conclude that the parties of capital, who are responsible for this disaster, must be ousted by the working people who produce all the wealth but receive crumbs in exchange. As Marxists, we call for the working class and oppressed people to take the lead in driving out the parties and the class that not only “manage” the crisis but created it in the first place. We need a workers party to lead the class struggle for socialist revolution, here and internationally, to uproot the capitalist system that keeps on oppressing us and poisoning our futures. ■