Corey Walker’s right to counsel of his choice is part of the right to a fair trial. The denial of access to legal redress in the courts is part and parcel of lynch-law “justice.” It is a system born in the toxic cauldron of chattel slavery, brutally maintained by the slave patrols, and expressed in the notorious “black codes.” African Americans were not regarded as fully human under the law. For decades after slavery, the lynch rope hung between African Americans and their “day in court.”

Police terror has always been a crucial device in America’s whitse supremacist history. Under Jim Crow segregation in the South, it was well understood that the local police departments were often synonymous with the local Ku Klux Klan. The nightriders took off their blue uniforms and put on their white ones. Far from protecting African Americans, the cops more often worked gun-in-glove with white racist mobs. 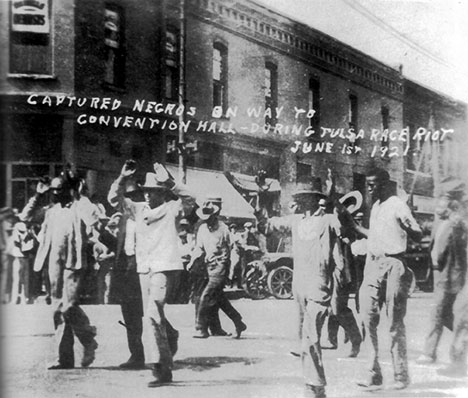 Tulsa, Oklahoma, 1 June 1921: Hundreds of black men were seized at gun point and marched to detention centers while vigilantes burned down the black community of Greenwood.
(Department of Special Collections, McFarlin Library, University of Tulsa)

In one infamous example, Tulsa, Oklahoma in 1921 was the site of one of the worst racist pogroms in U.S. history. Mobs burned down the entire vibrant black community of Greenwood – destroying more than 1,000 homes and businesses – and murdered hundreds. Precipitating the spasm of racist terror was a white mob howling to lynch an innocent black man being held in the local jail. Black veterans of WWI came armed to the jail to offer their services in defense of civic order against lynch-mob fury. Their offer was rebuffed by the authorities; instead the police deputized the lynch mob terrorists.1

This history is still with us today. Just look at the proliferation of “neighborhood watch” patrols such as the one George Zimmerman coordinated as he was “patrolling” a gated community in Sanford, Florida where he shot Trayvon Martin dead.2

The racial character of mass incarceration is not merely the result of excessive penal policies instituted since the election of Ronald Reagan, as many liberal reformers suggest. The policies that created urban ghettos started long ago and were intensified with industrialization and under the liberal New Deal.

As African Americans were driven into blighted areas of industrial cities by conscious policies of housing and employment discrimination, the capitalist state’s coercive machinery – the cops and prosecutors, the courts and prisons – were given the green light to be the blunt instruments of social control of that oppressed population. The niceties of rights were simply disregarded as the cops rode roughshod over the residents who were viewed as actual and potential criminals. That’s how a 12-year-old boy, Tamir Rice, gets gunned down in Cleveland by a cop who starts shooting as soon as he sees the child. The cop knew he would get off – not even a trial.3 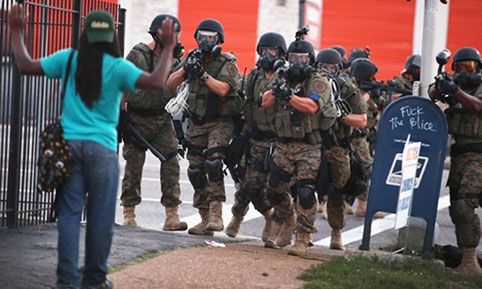 The too-familiar sociopathic cop culture is largely the institutional reflection of their legal immunity – the implicit understanding that there will be no legal accountability for the brutal actions of the “thin, blue line.” With impunity, police stop, frisk, bust and generally terrorize the young black men who inhabit urban ghettos built to contain and control them. In this sense, the cops are the contemporary iteration of the slave patrols of the ante-bellum South.

With the civil rights movement and radicalization of the 1960s and early ’70s, both capitalist parties instituted the “war on crime” backlash that murdered Black Panther Party leaders in their beds in Chicago, set up the COINTELPRO spying apparatus, and illegally imprisoned the most radical elements of the “black power” movement on all manner of trumped-up charges. In 1994 the Clinton Administration passed the Omnibus Crime Bill that provided millions of dollars  to expand state prisons, put 100,000 additional cops in the streets and expanded the death penalty to cover more than 50 federal crimes. On the streets, the target expanded to entrap and imprison thousands, tens of thousands, hundreds of thousand of youth, including those trying to survive like Corey Walker, in the only employment available to them: the underground drug trade.

The Internationalist Group opposes all laws criminalizing or regulating drugs (as well as alcohol, tobacco or other substances). Repealing those laws would put an end to the “drug wars” that have jailed hundreds of thousands of young people, devastated African American and Latino communities in the U.S., and laid waste to much of Mexico. Many defenders of democratic rights recognize that the outlawing of drugs has not stopped their use but only turned users and dealers into outlaws, while generating police and gang violence. Following the end of Prohibition in the 1930s, the organized crime associated with bans on alcohol was drastically reduced.

Modern mass incarceration in the U.S. is the result of a long racist history. Racism is tightly woven into the fabric of American capitalism. A distinctive characteristic of the U.S. capitalist state is that its concrete and coercive state institutions – its standing army, cops, court system and prisons – are forged in a crucible of official and unofficial racist terror. Although the forms may differ, this is true today no less than 100 years ago. It will take nothing short of a socialist revolution to put an end to the living legacy of slavery and the lynch law justice that lives on, half a century after the formal abolition of Jim Crow segregation. ■

See also: The Frame-Up of Corey Walker
Whose Life Is On the Line? Cop Stats
Bad Apples, Broken Windows, and Other Myths About the Police