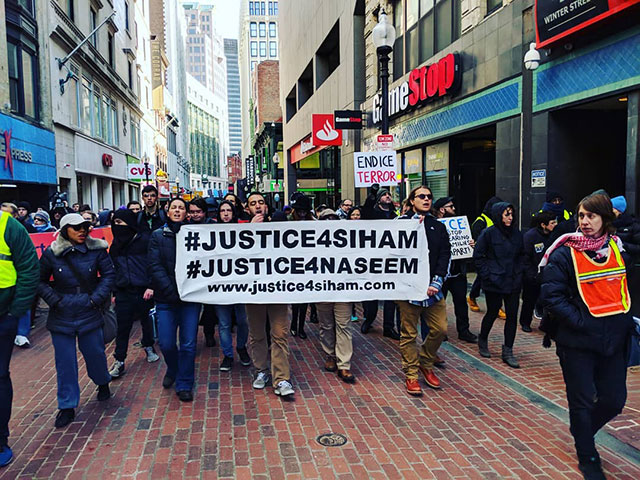 On January 22, hundreds marched in Boston demanding justice for Siham Byah, a single mother and prominent Occupy activist, defender of Palestinian rights and critic of the Moroccan monarchy. Last November she was torn from her son, beaten in jail and finally deported to Morocco.   (Photo: Justice4Siham)

The Class Struggle Education League based in Lowell, Massachusetts and southern New Hampshire is undertaking joint work together with the Internationalist Group with a view toward an early fusion of our forces.

On January 27, hundreds of defenders of immigrant rights from many leftist organizations, labor unions, churches and sanctuary networks rallied in front of the U.S. Immigration Courts in the JFK Federal Building in Boston to protest the deportation of Siham Byah. "Justice 4 Siham! Justice 4 Naseem! End All Deportations Now!" they demanded.

A prominent Occupy Boston activist and single mother from Nahant, Massachusetts, Byah was grabbed by the Immigration and Customs Enforcement (I.C.E.) police last November 7. Seized at what had been a routine immigration check, she was torn from her eight-year-old son Naseem, subjected to beatings and brutal conditions in Bristol County Jail where she launched a hunger strike, then shipped without warning to a facility in Virginia. Despite her legal appeal and an official letter from I.C.E. saying that she was not slated for deportation until her case was completed, on December 27 Siham was deported to Morocco.

As an Occupy Boston activist, Byah was well known for organizing demonstrations in solidarity with the “Arab Spring” wave of protests and uprisings in Egypt and Tunisia, as well as speaking out in defense of the Palestinians and being a trenchant critic of the Moroccan monarchy. Prior to her kidnapping by I.C.E., in 2012 she had received a summons to return to Morocco to stand trial for treason. Although at this time she is reportedly safe with family, Siham Byah’s life is in ever-present danger. The Class Struggle Education League demands No Deportations! Let Siham Byah Come Home!

A highlight of the rally was Byah’s piped-in phone call to speak to the crowd. Addressing the pathetic clot of pro-Trump, pro-I.C.E. “Resist Marxism” trolls hanging around the edges of the protest, she delivered a colorful excoriation of the “MAGA” scum before making a powerful appeal on behalf of herself, her son, and the thousands of others living in the shadow of summary kidnapping and deportation.

After an initial round of speeches, the rally marched through downtown Boston to the steps across from the Massachusetts State House next to the Saint-Gaudens monument to the Massachusetts 54th, the first regiment of free blacks (some of whom were escaped slaves or the sons of escaped slaves) called up after the promulgation of the Emancipation Proclamation to fight for the Union in the U.S. Civil War.

The CSEL organized carpools from New Hampshire and Lowell, Mass. to stand in solidarity with Byah, Ravi Ragbir, Jean Montrevil, the Justicia Migrante farm workers in Vermont and all others caught in the meshes of the Obama/Trump deportation machine. These modern-day slave-catchers have made it clear that they are absolutely bereft of humanity. Tearing mothers from sons, wives from husbands (for example, Karah de Oliveira, a Beverly, Mass. woman being deported to Brazil), fathers from children (such as Lexius Saint Martin, a Maine resident being held at a detention center in New Hampshire facing deportation to Haiti) – like the slave owners of the 19th century, there is no familial bond that the I.C.E. kidnappers respect. 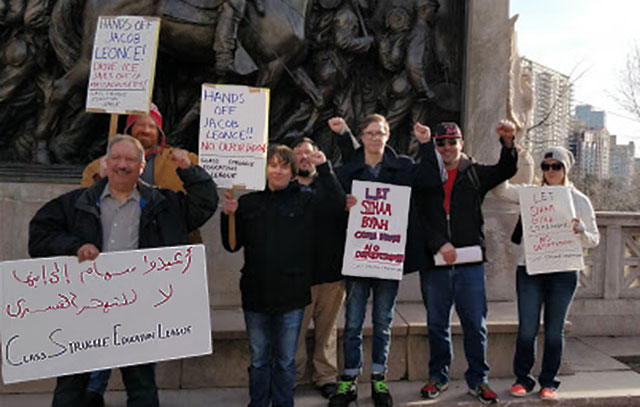 The Class Struggle Education League participated in the January 22 Boston protest, with car pools from Lowell and New Hampshire. The CSEL pointed to the power of mass labor/immigrant mobilizations to thwart I.C.E. actions, demanding “Let Siham Byah Come Home” and “No Deportations.” It also noted the parallel to the struggle against slave-catchers under the 1850 Fugitive Slave Act, a battle which came to a head in Boston.  (Photo: CSEL)

A CSEL spokesperson addressed the crowd drawing attention to the case of a Haverhill, Massachusetts laborer, husband, father of two, and respected member of the New England Pentecostal Church facing deportation to Saint Lucia in early February. Bearing a sign reading “Hands Off Jacob Leonce! Drive ICE Jails Out of Massachusetts!” the CSEL speaker drew analogies between Leonce’s case, which has involved criminally incompetent and unscrupulous lawyers fleecing him dry, and a proviso of the 1850 Fugitive Slave Act that financially rewarded judges for returning runaways to bondage.

The Fugitive Slave Act turned Boston into a battleground between slave-catchers and abolitionists, with many successful attempts to hide and spirit away escaped bondsmen. This culminated in a May 1854 abolitionist assault on a courthouse to free Anthony Burns, a 19-year-old runaway from Richmond, Virginia. A federal marshal was killed in the affray, and, although the attempt was unsuccessful, such was public opinion at the time that none of the rescuers were ever convicted of a crime, and Burns was later ransomed from slavery by Boston sympathizers, educated at Oberlin College, became a Baptist preacher and expatriated to Canada.

Making clear the similarities between the victims of ICE and fugitive slaves, the CSEL contingent distributed flyers for our Second Annual Black History forum In Honor of Ona Judge this coming February 17. Judge had run away from her “owner,” President George Washington, and fled to Portsmouth, New Hampshire where she was protected by abolitionists and free black longshoremen. The dockers used their position as workers in control of the ports and shipyards to thwart the slave-catchers that Washington sent to bring her back. Judge evaded repeated efforts to recapture and her and died a free woman in New Hampshire.

The CSEL contingent also distributed the Internationalist Group’s 19 January statement “Let Haitians Stay! For Full Citizenship Rights for All Immigrants!” to the crowd and displayed signs honoring Toussaint L’Ouverture and the Haitian Revolution, the most successful slave revolt in human history.

At the rally, the CSEL contingent pointed to the power of mass labor/immigrant mobilizations to thwart I.C.E. actions. Calling on the unions to take up the cause of Byah and Leonce,1 the CSEL speaker pointed to the participation of Roofers Local 36 in Los Angeles in the successful defense of a 7-Eleven store slated for an I.C.E. audit following the recent nationwide raids on the chain, as well as the successful efforts of the Durham Educators Association in North Carolina to prevent the deportation of a student there. In conversations at the rally, we also brought up the example of the Lufthansa pilots in Germany who have stopped over 200 deportations, as well as the September resolution of Teamsters Joint Council 16 in New York to declare itself a “sanctuary union.”

But declarations are not enough: mobilization of the labor movement in defense of immigrant rights and against the deportation machine is key. Many area unions now have vital immigrant concentrations, and these members understand the inextricable link between their persecution as immigrants and their exploitation as workers. For example, the Service Employees International Union has a large number of immigrant members throughout the area – including many Kenyan health care workers around Lowell who have successfully struck over the past few years – and they have seen their members come under attack.

One 32BJ/SEIU member, Francisco Rodriguez, a Salvadoran immigrant and janitor at the Massachusetts Institute of Technology, was detained by I.C.E. for months while his wife went through a complicated pregnancy. We are happy to say that, due to the union and other supporters’ efforts, Rodriguez was released on December 21, although he is still under threat of deportation. Boston school bus drivers are organized into United Steel Workers Local 8751 and are over 90% Haitian, hundreds of whom are in the United States under the Temporary Protected Status program recently cancelled by the Trump administration. Furthermore, Teamsters Local 25 has, over the past five years brought into the union over a thousand workers in the car valet parking industry, many of whom hail from Somalia and Ethiopia.

The connection between the attacks on labor and the attacks on immigrants are crystal clear to these union members, and their experience in union organizing drives and contract battles must be brought to bear in the fight against deportations. Many Moroccan workers are employed at the various companies doing business at Boston’s Logan Airport. Some are affiliated with the International Association of Machinists, but most are unorganized. The labor movement must understand that the fight for union rights and the fight for immigrant and black rights go hand in hand – they will either advance together or fall back separately. Organize immigrant workers!

As of this writing, Teamster 25 members are on strike in Chelsea and Everett, Mass. against Carmin Cargo and AMSPEC, respectively.2 The Class Struggle Education League is bringing the cases of Siham Byah and Jacob Leonce, and the fight to declare themselves a sanctuary union, to these striking workers, many of them Latino, locked in a bitter contract battle and they have received our literature with enthusiasm. The unions must come to the understanding that, as Karl Marx said over a century and a half ago, the proletariat has no fatherland. Workers of the world, unite! ■