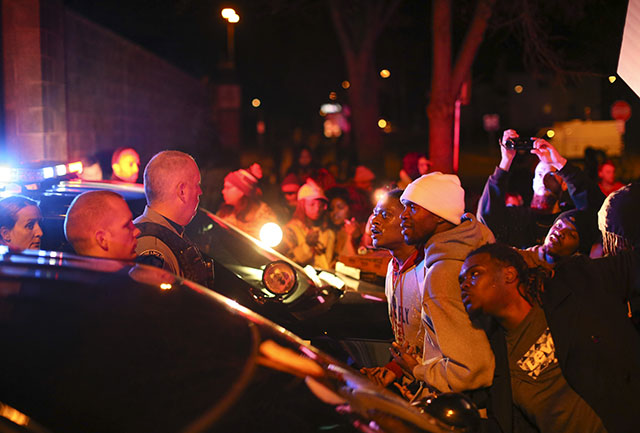 In the early hours of Sunday, November 15, an unarmed black man, Jamar Clark, 24, was shot in the head by police in north Minneapolis, Minnesota just a couple blocks from the 4th Precinct station. A crowd gathered at the scene screaming at the cops. According to witnesses, Jamar was in handcuffs when he was shot. Police at first denied he was cuffed, but the Minneapolis Bureau of Criminal Apprehensions later said it was “still examining” the issue. Handcuffed or not, whatever the circumstances of what authorities are calling his “altercation” with the police, Jamar Clark is one more victim of murderous, racist U.S. capitalist rule. Even in “progressive” Minneapolis, police murder unarmed black men in plain view on the street.

The next day protests led by Minneapolis Black Lives Matter marched through the city. Family members reported that Jamar had been shot point-blank, right above the eye “execution-style.” An official of the local NAACP told the press that they had been saying for some time that “Minneapolis is just one bullet away from Ferguson. That bullet was fired last night.” The city has a history of police killings, 29 since 2000, 18 of them of black people. Two-thirds of those arrested are African Americans, although they are only 20% of the population. Minneapolis was already one of six cities nationwide in a Justice Department “pilot project” to “improve community relations.” Feeling the heat, the mayor immediately called for a federal investigation.

When Jamar died in the hospital two days later after being taken off life support, enraged protesters besieged the police station demanding that video footage from the shooting  be released. Meanwhile, hundreds streamed onto the nearby I-94 freeway and shut it down for several hours; 51 were arrested. As people returned to the spot where Jamar was shot, they set up an encampment saying they wouldn’t let the issue go away. The police crackdown only escalated tension. Protest spread to the labor movement, as AFSCME Local 3800, which represents clerical workers at the University of Minnesota, and the SEIU Minnesota State Council passed resolutions of solidarity with Black Lives Matter demonstrators and repudiating police attacks.

That Saturday, November 21, over 200 union members from around the Twin Cities gathered at the 4th Precinct campsite where labor officials from the state Nurses Association, Letter Carriers, and others, including the vice president of SEIU Healthcare MN and the president of the St. Paul Federation of Teachers, spoke out. “It is our union’s duty to fight for our freedom … we have nothing to lose but our chains,” said CWA Local 7250 activist Alanna Galloway to cheers and applause. But as protests continued, the police built a concrete barrier in front of the precinct. When racists began showing up, cops made “disparaging comments to those at the protests instead of taking the threat seriously,” a BLM organizer said. 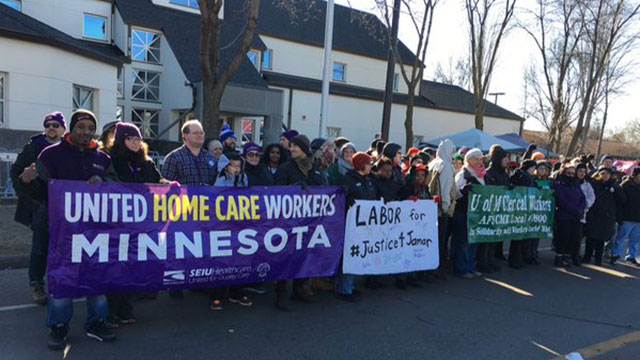 Union members came out to protest police murder of Jamal Clark, November 21. Labor must use its power to shut down the Twin Cities over racist cop terror.   (SEIU)

Then late on November 23, four masked fascists who had previously harassed the protests appeared and began filming the camp. When a safety committee escorted them away after they refused to remove the masks, the white supremacist infiltrators began firing, shooting five protesters, all black men. A relative of Jamar Clark told the New York Times (25 November) that the police just “sat here and watched.” When protesters asked why they didn’t do anything, the police responded, “This is what you all wanted, right?” As the would-be assassins fled, police attacked the encampment with pepper spray. Here was proof positive: from the days of Jim Crow to today, “cops and Klan go hand in hand.”

The murderous attack did not deter people waging a determined fight against racist injustice. The next day, November 24, protests swelled as thousands marched on City Hall. Students and campus workers came from the UofM. Hundreds of high school students walked out at Southwest and Washburn high schools to join the downtown march, defying the previous day’s fascist attackers and drawing attention to the de facto segregation of Minneapolis public schools. By the end of the day, three of the white supremacist attackers were arrested. They had bragged in an on-line video that they were headed to the protest, flashing a pistol and spewing racist insults, saying they were going to “make the fire rise” and to “stay white.”

Outrageously, and typically, the response of various politicians to the deadly attack was to smear the protesters and increase pressure to shut down the protest camp. Mayor Betsy Hodges held a press conference with U.S. Rep. Keith Ellison denouncing “near-daily threats to burn the precinct, kill our officers and to hurt people.” The Star Tribune (1 December) reported, “Hodges described the scene as one with protesters’ warming fires polluting the air, makeshift barricades blocking ambulances and snowplows, and outside agitators committing violence with guns.” Finally, at 4 a.m. on December 3, the city brought in police and dump trucks and gave the Black Lives Matter protesters 15 minutes to pack up and get out or be arrested (eight were).

Significantly,all of the politicians involved are from the Democratic Farmer-Labor Party (DFL), including Mayor Hodges, Rep. Ellison, Governor Mark Dayton (of the Dayton/Target department store dynasty, married to a Rockefeller heiress) and the rest. Although Minnesota has turned to the right in recent decades, the DFL (a merger of the Democrats and the Farmer Labor Party), from which Hubert Humphrey purged the Communists in 1948, has a reputation of being on the liberal wing of the Democratic Party nationally. Yet here are the liberal Democrats lining up to defame anti-racist demonstrators, defend the cops and then order police to remove the protesters, all the while claiming to respect First Amendment rights to free speech and assembly!

Having maintained the protest camp for 18 days in the face of freezing temperatures, fascist attack, and police threats and arrests, Black Lives Matter demonstrators refused to be intimidated. On December 23, hundreds of BLM protesters converged on the Mall of America in suburban Bloomington, the largest mall in the country, to protest on one of the biggest shopping days of the year. While a judge refused to enjoin protesters from coming, the mall owners brought in an army of rent-a-cops and state police in riot gear to enforce their “right as private property owners to prohibit demonstrations on our property.” The evicted protesters then proceeded to the Minneapolis-St. Paul airport, where they faced a combined force of suburban police, managing to shut down access to Terminal 1 and temporarily block the highway.

Behind a liberal façade, Minneapolis has long had festering racism, and not just in the police.* Longtime Northside residents remember Nelson Tycel, 17, shot in the back six times in 1990 while fleeing from the police. Terrance Franklin, 22, was shot ten times in the back and back of the head in 2013 because police said someone said he looked like someone involved in a burglary a week earlier. There were demonstrations then, too, and demands that police practices change, but nothing did. Then there was Dominic Felder, suffering from mental health issues, who in 2006 was shot seven times in front of family members who had called 911 for help. The current police chief, Chief Janee Harteau, says she fired officers who made racist remarks in Green Bay. But Fraternal Order of Police head Bob Kroll belches out this filth almost daily. 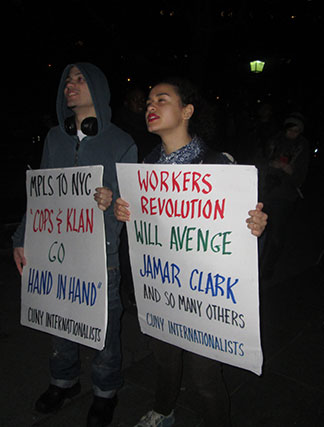 Members of CUNY Internationalist Clubs joined hundreds who marched in NYC on November 24 in solidarity with Minneapolis protest over cop murder of Jamar Clark which was attacked by white supremacists. (Internationalist photo)

Democrats and Republicans will not and cannot put a stop to racist police terror because they depend on the guard dogs of capital to maintain “law and order.” Some of these politicians feign support to protests like Black Lives Matter in order to make sure they don’t get “out of control” (i.e., threaten the domination of United Healthcare, Target, Best Buy, 3M, U.S. Bancorp, General Mills and other giant corporations). And if protesters can’t be assuaged by “I feel your pain” bromides, the liberals call in the cops. It is important that hundreds of trade unionists have come out to protest the murder of Jamar Clark. In another promising effort, young members of the United Electrical Workers in Burlington, Vermont organized a workers defense guard to counter the Ku Klux Klan. But much more is needed.

It is necessary to mobilize the workers movement to shut down the profit system. And that requires, first of all, a fight to break with the DFL and all bourgeois parties and politicians.

Several leftist groups have been involved in the Minneapolis protests, including Socialist Alternative (SAlt, whose candidate, Ty Moore, endorsed by the Green Party, narrowly lost a 2013 election for city council), Freedom Road Socialist Organization, Socialist Action and Workers International League. All criticize the Democrats, but fighting inside the unions to break the chokehold of this party of big business over labor is another matter. SAlt, in particular, limits itself to attacking the “Democratic Party establishment,” since it is now feverishly campaigning for Bernie Sanders as he runs in the Democratic primary. These social democrats consider cops to be “workers in uniform” and call for “community control of the police,” an illusion that flatly contradicts the Marxist understanding of the class nature of the state.

Instead of forlornly appealing for Democrat Obama’s federal government to “investigate” the police – which everyone from Black Lives Matter organizers to union leaders to the mayor did, and which will at most produce only cosmetic changes – the unions must move beyond gestures and bring out the economic and social power of their tens of thousands of members to shut down the Twin Cities and protect the protests. As an example, last May 1 International Longshore and Warehouse Union Local 10 shut down San Francisco Bay Area docks and marched on Oakland City Hall at the head of thousands demanding “Stop Police Terror.”1

On the same day, inspired by the Bay Area action, Class Struggle Workers – Portland organized a multi-union contingent in the May Day 2015 protests marching under the banner, “Labor Against Racist Police Murder.” (The CSWP is a tendency in Portland, Oregon-area unions that is politically supported by the Internationalist Group.) These are small examples of what needs to be done, but they point in the right direction. The idea that justice could be obtained by pressuring the courts and capitalist politicians to investigate, “reform” or prosecute the racist police on which capital depends is a dangerous illusion. We must look to using our own class power to put an end to the bloody lynch law system that has taken so many of our brothers and sisters from us.

We need to oust the bureaucrats, break with the Democrats and build a revolutionary workers party as a champion of the oppressed, a party in which African American, Latino, Asian, Native American and immigrant workers play a leading role. The task of this party is to finally sweep away the racist terrorists, in and out of uniform, and finish the Civil War, by achieving the revolutionary emancipation of today’s wage slaves from the tyranny of capital. ■

* Recently the local Fox TV posted a casting call on its Facebook page for a “Caucasian Female co-host For Luxury Product Placement… no visible tattoos, 5’8”or taller” on a weekly TV show titled Minnesota Nice – until they got a flood of critical comments, and took the post down (CityPages, 5 January)!