No Segregation at Anti-Racist Protests!

At a number of demonstrations that the Revolutionary Internationalist Youth has attended in the past period, liberal organizers have literally tried to segregate protesters in line with their notions of hierarchies of oppression. Starkly counterposed to real struggle against oppression, such “privilege theory”-inspired antics are no joke. In the face of the cops, Immigration and Customs Enforcement (I.C.E.) and other repressive forces, this expression of guilt-tripping identity politics liberalism can quickly endanger the safety of protesters.

A glaring example of this occurred at a 14 July 2019 protest against an I.C.E. raid carried out the day before in Sunset Park, a largely immigrant and Latino neighborhood in Brooklyn, New York. Cop cars continually circled the block where the crowd of over 100 was gathered. Using a public-address system, liberal organizers told the crowd to form two separate groups. They said those who “feel vulnerable” as a result of the previous day’s I.C.E. raid should gather together to form one group. “People with privilege,” organizers instructed, should remain where they were standing and link arms with each other. A kind of aisle was created between them and the group that the organizers’ liberal segregation tactics had identified as being more vulnerable.

Then a cop car pulled up next to the protest; an organizer frantically said something into the PA system. Most of the crowd took off running, while others – confused – stayed behind. (It was later stated that organizers had been incorrectly told that I.C.E. agents had been seen standing near a sanctuary church a couple of blocks away, but it was “only cops” in plainclothes.) Intoning the standard popular-frontist chant of “el pueblo unido jamás será vencido” (the people united will never be defeated), the organizers, having grievously disunited those who had come out to protest together against immigration raids, then led those who still remained to the church. So in idiotically acting out their “check-your-privilege” theatrics, they – doubtless despite their intentions – created a situation virtually ideal for cops, I.C.E. and/or anti-immigrant bigots to identify and isolate people. Our comrades refused to participate in this grotesque and dangerous display. 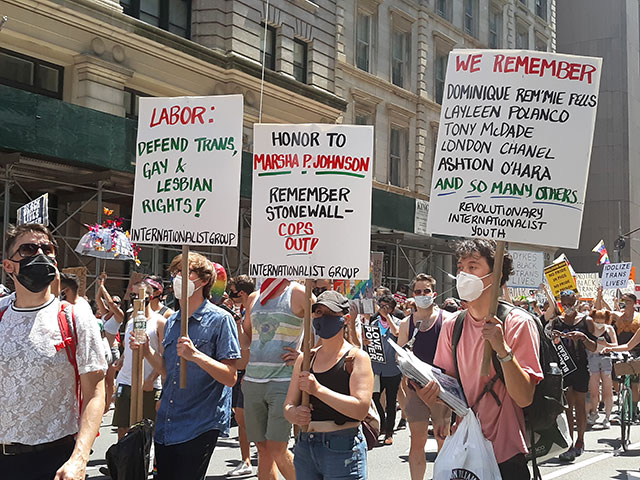 This year, at a June 28 protest called in downtown Manhattan by the Reclaim Pride Coalition, a lead organizer announced that the march, which highlighted the issue of police brutality, would be separated into groups – according to tiers of oppression. They instructed black trans people to go first, followed by black disabled people, then non-black disabled people, followed by everyone else. Fortunately, the crowd of thousands was already integrated and it stayed that way.

Against the basic understanding that effective struggle against the double and triple oppression of transgender people means joining forces with all the oppressed, such calls seek to draw lines of rank and hierarchy separating each sector off from the others. Sometimes this is accompanied by guilt-edged calls for “white allies” to act separately to “protect” the oppressed, rather than working together in a common fight of comrades in struggle. This not only creates the illusion that upon seeing a line of white protesters, cops will thereby refrain from attacking the crowd, but can put a target on some demonstrators who are most vulnerable to repression and in some cases deportation. To defeat vicious and dangerous enemies of the oppressed, what’s needed is uniting the exploited and oppressed in struggle against each and every form of oppression, bringing in the power of the multiracial working class.

So as we pointed out amid these and other episodes, attempts to segregate protests based on identity and “privilege” are a very real danger to the oppressed. In opposing liberal and nationalist attempts to impose segregation at protests, we and other class-struggle militants uphold the most basic interests of the fight against oppression. ■