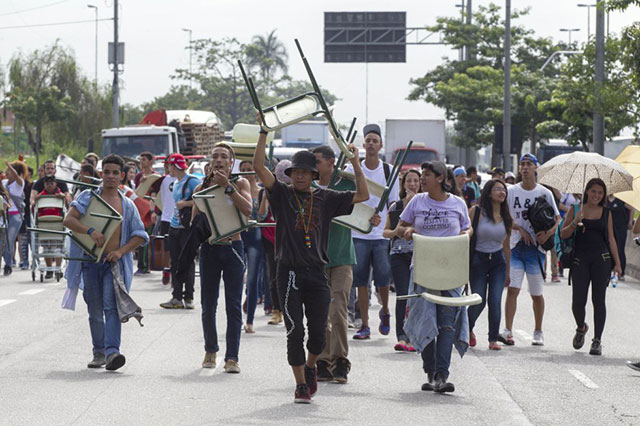 Secondary school students block avenue in São Paulo, Brazil on December 4 after police began evicting students them from hundreds of occupied schools where they have been protesting threatened school closings. Later that day, the governor backed down and suspended school “reorganization” plan. (Photo: EFE)

DECEMBER 4 – For the last three weeks, the city of São Paulo, Brazil has been convulsed by a combative upheaval of high school students protesting the state government’s plan to close 92 schools and order hundreds of thousands of students to change schools. After announcing the school reorganization plan at the end of September, Governor Geraldo Alckmin of the right-wing PSDB (Brazilian Social Democratic Party) sought to ram it through without any consultation with teachers, students and parents. The students responded by occupying 192 schools. When the government this week sent in the military police to retake the schools, students blocked key intersections and highways in the city of 12 million people, the largest in the Southern Hemisphere. This explosive struggle should receive active solidarity from the working class, students and all defenders of public education throughout Brazil, and internationally.

Faced with the mushrooming revolt and his falling popularity in opinion polls, this afternoon (December 4) the governor “suspended” the reorganization. This does not end the struggle, as the students have announced that they will continue the school occupations until the reorganization plan is definitively canceled. At the same time, the entire country has been in turmoil for months over a corruption investigation, the “Lava Jatos” (carwash) scandal, targeting the semi-privatized state oil company Petrobras. And two days ago right-wing forces in the federal Congress moved to begin impeachment proceedings against President Dilma Rousseff of the Workers Party (PT), supposedly for using accounting tricks to delay budget payments. Meanwhile, key sectors of the working class have been fighting against the anti-worker austerity policies implemented by the PT-led popular-front government, including a national strike by Petrobras workers last month. 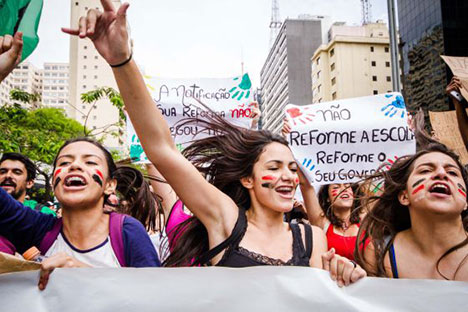 The São Paulo schools have been a battleground for months against the authoritarian Alckmin government. A 92-day strike by the APOESP (state teachers union), the longest in its history, was defeated due to the failure of the rest of the labor movement to back it up in action. Then came the abrupt announcement by the state education department of its reorganization plan that would change the schools of at least 300,000 students and affect several million more. The plan was based on policies of international financial agencies and experiments in the United States by corporate education “reformers” aiming at increasing the “productivity” of schools. An immediate result would be to greatly increase the numbers of students per class in the already overcrowded schools (one of the reasons for the teachers strike). Education departments at state universities denounced the plan is a move to prepare the schools for privatization.

Students started protesting in mid-October. When a school in an upscale neighborhood of São Paulo city decided to occupy it on November 11, Alckmin decided he had had enough and sent a hundred military police to surround it. Instead of intimidating the students, this set off a wildfire of school occupations, with dozens of schools joining the movement every day. The government sought a court order for police to evict the occupiers, but a panel of judges unanimously turned it down, saying the students were just asking for dialogue. The governor refused, and the beginning of this week dispatched squads of police to clear out some of the schools. Last Friday, a top state official declared “war to the end” against the students. Foreseeing this possibility, student activists put out a guide on how to tie up traffic. When the cops showed up and began firing tear gas grenades, the students took chairs and tables and set up class in the middle of busy intersections and highways. 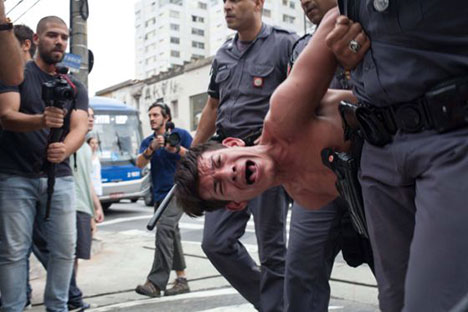 The student mobilization in Brazil is a dramatic example of how the international capitalist offensive against public education should be fought – by mass action in the streets, bringing out students, teachers, parents and mobilizing the power of the working class. São Paulo students chant, “this is going to turn into Chile,” recalling the 2006 rebellion by Chilean high school students, dubbed the “Revolt of the Penguins,” that eventually paralyzed the country. In Brazil, our comrades of the Class Struggle Committee (the trade-union tendency linked to the Liga Quarta-Internacionalista do Brasil) are calling for the state teachers union of Rio de Janeiro, the SEPE-RJ, and other unions, to prepare to carry out work stoppages in solidarity with the São Paulo students and against “school reorganization” plans nationally. But even left-led unions like the SEPE are loath to defy the bosses’ laws, which has led to one defeat after another for educators and the whole of the working class.

In the U.S., Class Struggle Education Workers (a tendency, politically supported by the Internationalist Group, active in education unions in New York City) has called for militant action such as has periodically been undertaken by unions in Brazil and Mexico. Faced with the wave of racist school closings ordered by ex-mayor Michael Bloomberg, the CSEW called to mobilize teachers, students, parents and staff to occupy closing schools. That is now being done on a mass scale in São Paulo, Brazil. Faced with high-stakes testing linked to teacher evaluations (ordered by the Democratic Obama administration) aimed at firing teachers, we have said “opt out” movements are not enough and the union must take the lead in refusing to give the tests. In Brazil the SEPE repeatedly called strikes, shutting down schools when tests were scheduled. And in the present struggle, São Paulo students massively refused to take a high-stakes test.

Whether it is sending heavily armed military police to fire on protesting students in Brazil, or using laws to prohibit strikes such as the New York state Taylor Law, the ruling class will always use its state apparatus – the police, courts, jails and, if necessary, the armed forces – to attempt to prevent militant workers struggles. But if workers take the lead in defending all discriminated and oppressed sectors of society – mobilizing workers action against racist police murders and deportations, demanding full citizenship rights for all immigrants, defending abortion clinics against attack – we can shred anti-labor legislation and overcome repression. Yet that requires a political struggle against capitalism, against the Democrats, Republicans and all capitalist parties, and a fight to build a workers party based on a program of intransigent class struggle. Otherwise, even promising struggles, such as in Brazil, cannot achieve lasting victory.■