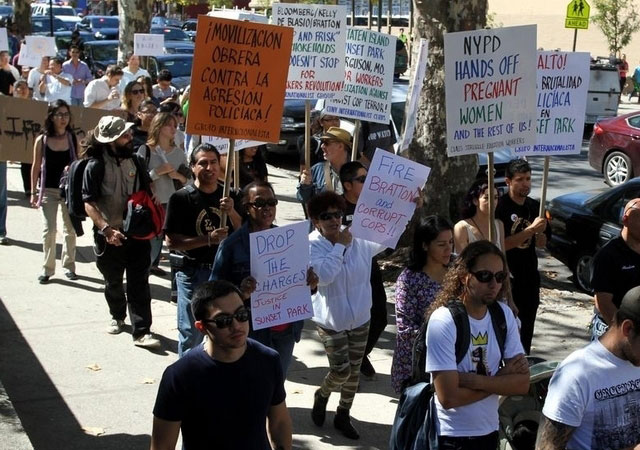 It keeps on happening. It’s been only two months since Eric Garner was chokeholded to death in Staten Island by the racist cops, and barely a month and a half since the police murder of 17-year-old Michael Brown in Ferguson, Missouri. But despite the national outcry and a thousands-strong march in New York in late August, two incidents in the Sunset Park neighborhood of Brooklyn, both caught on video, show once again the face of racist police violence under liberal Democratic NYC mayor Bill de Blasio.

The first involved a heavy‑duty arrest of a vendor after a festival in the park on Sunday, September 14. The video of the takedown shows a swarm of cops piling onto Jonathan Daza just as they did to Eric Garner. An NYPD officer comes over and kicks Daza while he is on the ground. The second incident took place the next weekend, as a cop slammed a visibly pregnant woman, Sandra Amezquita, to the ground face first. When Mercedes Hidalgo approached to say Sandra was pregnant, the same officer violently shoved her so she went rolling on the street.

Ms. Amezquita has black and blue marks on her abdomen which her lawyer says may indicate that the police also beat her with an ASP extendable metal baton. While virtually every TV channel in town has broadcast the video showing the policeman grabbing Sandra from behind and throwing her down, the New York Times (25 September) cynically claimed she was “falling” to the street after having “scuffled” with the officers. The cops also arrested her husband, Ronel Lemos, her 17-year-old son, Jhohan Lemos, and a third man, Secundino Payamps, on trumped-up charges.

Sunset Park has a large immigrant and Latino population, and local residents complain that they have been singled out for aggressive enforcement under Commissioner William Bratton’s famous “broken windows” strategy of arresting people on minor “quality of life” charges. The first incident occurred as cops pushed vendors to shut down after a 6 p.m. closing time. In the second incident, police claimed they “saw Lemos with a clip on his pants pocket that indicated he might have a knife,” and grabbed him for “questioning” (Washington Post, 24 September).

After all the attention focused on police brutality at Eric Garner’s funeral and the August 23 mass march in Staten Island , it’s plain to see that the NYPD hasn’t changed its ways. The police, after all, are an apparatus of organized violence defending the interests of the ruling class. But in the face of this new rash of attacks, a protest was called for Saturday, September 27 by El Grito de Sunset Park, which has been tracking police harassment in the area, and the NYC Congress for Puerto Rican Rights, and backed by various Sunset Park groups.

The march was sizeable, with at least 300 people participating. The police were out in numbers, as they have been in the days leading up to the protest. Squads of up to a dozen cops have been roaming subway stops along Fourth Avenue and in the adjacent petty-bourgeois neighborhood of Park Slope checking bags. Sunset Park seemed to be under lockdown. The message was clear: Bratton & Co. wanted to discourage immigrants and Latinos from protesting on Saturday. But residents refused to be intimidated. 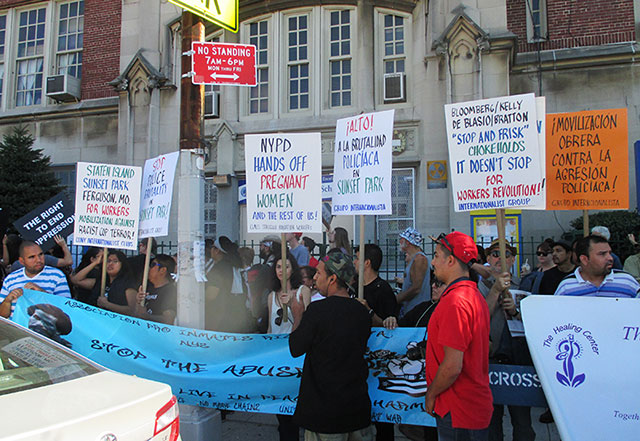 Rally opposite Precinct 72 at end of September 27 march against police brutality in Sunset Park, Brooklyn. Residents refused tyo be intimidated and over 300 came out to protest. (Internationalist photo)

At the march there were the usual chants of “No justice, no peace” and “the people united will never be defeated,” feeding illusions that somehow “the people” can get justice under capitalism. Quite a few young people joined in, some with the Brooklyn youth group UPROSE, which had a couple of banners. Activists from Copwatch had signs calling for “Respect” and “We know the truth.” A banner of the Stop Mass Incarceration Network demanded, “Indict and Jail Killer Cops!” Revolutionary Marxists warn that the bourgeoisie stands by its killer cops.

A contingent of the CUNY Internationalist Clubs, the Internationalist Group and Class Struggle Education Workers participated in the march including immigrant workers along with students and professors from the City University. In contrast to the appeals by liberals and reformist “socialists” who push the illusion that the capitalist state can be reformed to serve the oppressed, our signs called for workers mobilization against racist police terror. We also demanded full citizenship rights for all immigrants and called to break with the Democrats and build a revolutionary workers party.

An Internationalist sign noted how NYPD attacks didn’t end with Republican plutocrat mayor Michael Bloomberg and his police chief Ray Kelly but continue unabated under the Democrats: “Bloomberg/Kelly, De Blasio/Bratton – ‘Stop and Frisk,’ Chokeholds – It Doesn’t Stop – For Workers Revolution!” Another sign proclaimed: “NYPD Hands Off Pregnant Women … And the Rest of Us!” And we emphasized: “Imperialist Occupation of Iraq, Afghanistan – Racist Cop Terror in U.S. – It’s the Capitalist System.”

At the rally at the end outside the 72nd Precinct on Fourth Avenue, Nicholas Heyward, father of the 13-year-old black child Nicholas Hayward Jr. who was killed in 1994 spoke. Heyward said that “William Bratton was commissioner when my son was killed by the police” and Bratton’s “broken windows” strategy only encourages more police repression. A number of speakers repeated that the cops need to be made to respect the people. Several called for Bratton’s resignation. Dennis Flores of El Grito de Sunset Park said that it’s not about more and better training, it’s a “systemic” issue. 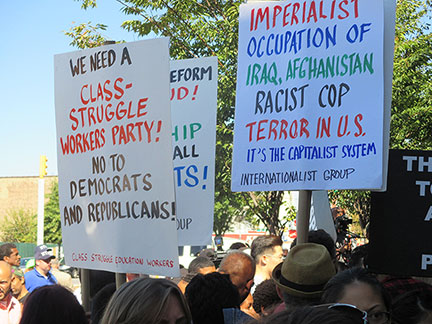 Absolutely, but we have to say loud and clear that the system is capitalism. Police brutality won’t be ended by naming a new commissioner, or through “conversation” with the police (such as is being called for at a town hall meeting this Wednesday, October 1). As Marxists, we tell the inescapable truth that the police are not neutral, they are the armed first of the bourgeoisie. Killer cops are not some “bad apples” but professional strikebreakers and enforcers of racist “law and order” for the bosses who squeeze their profits from our labor.

The latest cases of racist cop violence in Sunset Park are an object lesson in the role of the police. From Ferguson, Missouri to Staten Island and Brooklyn, New York, poor, oppressed and working people need to rely on our own strength. We make the system run, and we can bring it to a screeching halt. Would-be leftists who pretend that police are workers are spreading suicidal illusions. This apparatus of racist repression cannot be reformed to “serve the people” – a workers revolution is needed to bring down the system of war, racism and poverty it defends. ■