No More Ayotzinapas! No More Nochixtláns!
Workers to Power from Brazil to Mexico and the U.S.!

Tri-National Day of Solidarity Action
with Mexican and Brazilian Teachers 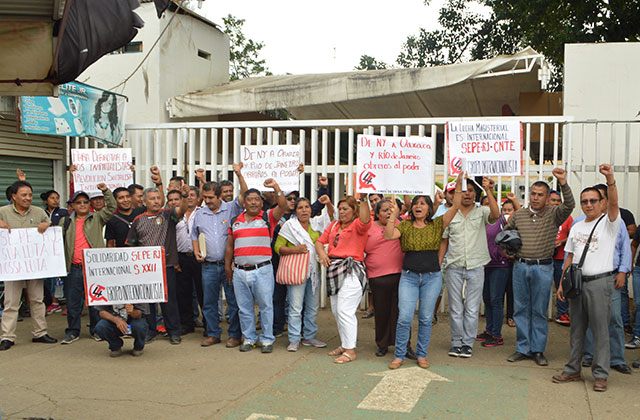 Some 200 teachers of the CNTE (National Coordinating Committee of Education Workers) Section 22 shut down the Oaxaca state education department (IEEPO) on Wednesday, August 17, and held a meeting in solidarity with the SEPE teachers union of Rio de Janeiro. Signs say “Teachers Struggle Is International” and “From NY to Oaxaca and Rio de Janeiro, Workers to Power.” (Grupo Internacionalista)

On Wednesday, August 17, demonstrations were held in three countries and four cities in solidarity with the Mexican teachers who have been waging a courageous strike for more than three months. They are fighting against the bogus “education reform” which in fact is a capitalist attack on public education and teachers unions, not only in Mexico but around the world. In Rio de Janeiro, Oaxaca, Mexico City and New York City, teachers, students, trade unionists and activists demanded “Stop Repression of Mexican Teachers.” During the strike of the CNTE (National Coordinating Committee of Education Workers), teachers in the southern Mexican states of Chiapas, Oaxaca, Guerrero and Michoacán have braved murderous police attacks. At least a dozen teachers, parents and activists were killed by federal and state police in mid-June in Oaxaca, notably in the June 19 massacre of Nochixtlán, Oaxaca.

Rio de Janeiro: In Brazil, the leadership of the Rio state teachers union, the SEPE-RJ, passed a motion calling for a solidarity action in support of the Mexican teachers. The motion was put up by the Comitê de Luta Classista (CLC – Class-Struggle Committee), a union opposition tendency linked to the Liga Quarta-Internacionalista do Brazil (LQB – Fourth Internationalist League of Brazil). The Rio teachers have just come off a determined strike lasting more than five months (21 weeks, 147 days), the largest and longest in the SEPE’s history. Their tenacity won important gains, including back pay for strike days going back to 1993, the election of school principals by teachers, students and parents, and the elimination of the high-stakes exams which teachers have refused to administer. However, some of the strikers’ key economic demands (including for a 30% raise) have not yet been met. While the strike was “suspended” over the opposition of almost two-fifths of the strikers (including the CLC), teachers are still “on strike footing,” and in the middle of the Olympic games the SEPE initiated the tri-national day of solidarity action with the Mexican teachers. 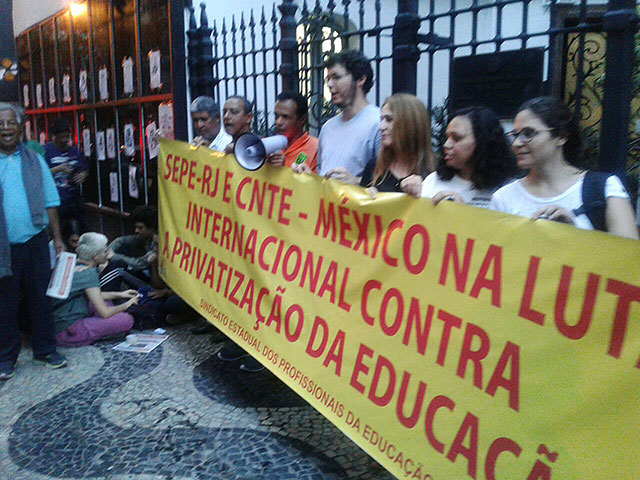 Over 100 teachers and students demonstrated in front of the Mexican Consulate in Rio de Janeiro August 17, at the height of the Olympics, in solidarity with the striking teachers in Mexico. Protesters denounced the Mexican government as “serial killers of students and teachers since 1968.” (Liga Quarta-Internacionalista do Brasil)

On Wednesday more than 100 teachers, students and their supporters marched to the Mexican Consulate in Rio to demonstrate their solidarity with the CNTE and the combative teachers of Oaxaca in particular. A union banner proclaimed “SEPE-RJ and CNTE-Mexico in the International Struggle Against the Privatization of Education.” Protesters referred to the Mexican government as “serial killers of students and teachers since 1968” (the infamous massacre of Tlatelolco), as well as the disappearance of the 43 students of Ayotzinapa in 2014. Signs of the LQB called for a “National Strike Against the Criminal Mexican Government,” “Workers Revolution Will Avenge Our Dead” and “Smash the Privatization Offensive of the Bourgeoisie with International Socialist Revolution.” A contingent of 40 students joined the protest, marching behind a banner saying “Stop the Games, We Want Justice.” During the strike, 92 schools were occupied by the students, which was a major reason that the teachers were able to hold out so long. After the students arrived, the Shock Battalion of the Military Police was called in. Well aware that the police are the armed fist of capital, the demonstrators refused to be intimidated. A telephone connection was established so that the speeches in Rio could be heard simultaneously by demonstrators in Oaxaca and Mexico City.

Oaxaca: Some 200 teachers of Section 22 of the CNTE blockaded entrances to the Oaxaca State Institute of Public Education (IEEPO), shutting it down, as they have done daily since the beginning of the strike last May 15. For months, the teachers and parents have maintained up to three dozen barricades on highways around the state, as well as shutting down shopping malls where they have targeted “multinational” chain stores, such as Walmart. The local newspaper Noticias, which has kept up a steady barrage of anti-union propaganda, carried a headline, “CNTE – A Category 5 Hurricane.” Another story emphasized that a new army plan, DN-III, has been prepared “to attend any contingency.” At the solidarity meeting outside the IEEPO called by Section 22, a number of strikers spoke, as did members of the Grupo Internacionalista. GI speakers emphasized that the supposed education “reform” that teachers are fighting against was designed by the imperialist financial agencies and implemented not only by the gobierno asesino (murderous government) of Mexcan president Enrique Peña Nieto but in Brazil and the United States. Strikers were also able to hear the speeches being given in Rio de Janeiro, making the international connection real. Signs hung from the gates of the shuttered IEEPO declared, “From NY and Oaxaca to Rio de Janeiro, Workers to Power!” 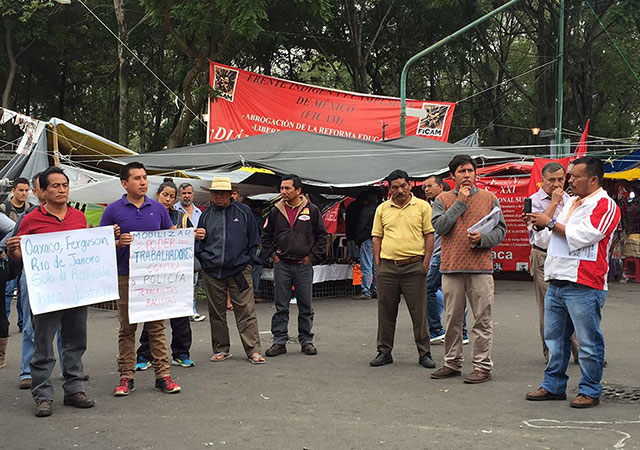 Mexico City: Simultaneously, a protest was held in Mexico’s capital at the plantón (tent city) of striking teachers from the various states. Some 60 teachers attended the meeting, where half a dozen strikers of the CNTE spoke, sending greetings to their fellow teachers in Brazil, as well as chanting, “SEPE-CNTE, una sola lucha” (it’s all one struggle). Signs declared, “Oaxaca, Ferguson, Rio de Janeiro, Only Revolution Will Bring Justice” and “Mobilize Workers’ Power Against the Racist Terrorist Police.” A Mexican student in Brazil and a Brazilian student in Mexico, supporters of the League for the Fourth International, spoke, emphasizing the need for international socialist revolution to defeat the capitalist drive for privatization. Speakers from the GI stressed the need to fight for the political independence of the workers against all the capitalist parties, not only the governing PRI and the rightist PAN and nationalist PRD, all of whom voted for the teacher-bashing education “reform,” but also the populist MORENA which claims to support the teachers, but opposes the call for abrogating the privatizing counter-reform.

New York City: A few hours later some 40 protesters picketed outside the Mexican Consulate in NYC in solidarity with the protests in Rio, Oaxaca and Mexico City. The action was called by the Internationalist Group, Class Struggle Education Workers, the Internationalist Clubs at the City University of New York, and the newly formed Trabajadores Internacionales Classistas (TIC – Class Struggle International Workers). The leaflet for the protest demanded, “No More Ayotzinapas! No More Nochixtláns!” A father of one of the 43 disappeared Ayotzinapa students thanked the teachers, both in Brazil and Mexico, for continuing to struggle against the criminal state. A student who recently traveled to Mexico with a delegation of Internationalist Club members emphasized that racist cop terror was not only endemic in Mexico and the U.S., but rooted in capitalism. The student delegation gave talks at the National University of Mexico and at the teachers’ encampment about the struggle against police murders of African Americans in the U.S. Speakers from the TIC included an immigrant woman worker and a worker from the B&H warehouses, who said that their successful struggle for union representation showed the power of united workers action. Protesters chanted “¡Luchar, vencer, obreros al poder!” (Fight, win, workers to power). 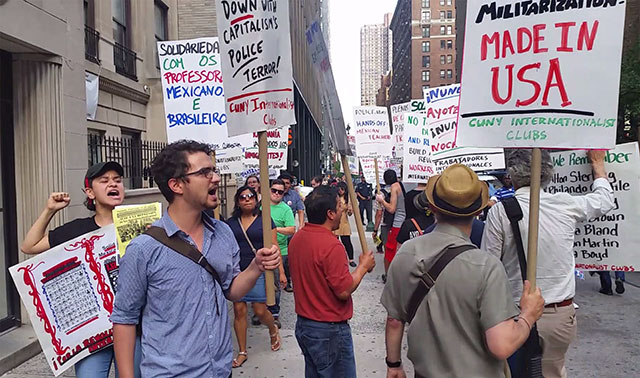 Immigrant workers, educators, students and community activists picketed the Mexican Consulate in New York demanding an end to the repression of striking teachers of the CNTE. Protesters denounced Obama's immigration “reform” as a fraud and said “No to Democrats and Republicans, Build a Revolutionary Workers Party.” (Internationalist photo)

A teacher activist from the CSEW, recently returned from several months in Oaxaca, explained how the CNTE’s fight for union independence from state control is a fight directly against the SNTE, a fake “union” totally controlled by the government, which is scabbing during the bitter teachers strike and offered to supply scabs to replace the thousands of strikers the government intends to fire. Speakers from the Internationalist Group emphasized that teachers in Oaxaca and Rio have shown exemplary militancy, but even their courageous  and inspiring refusal to bow before massacres and state terror is not enough to win. The CNTE’s call for “dialogue” with the murderous government is a trap, and what is urgently required is a struggle to forge a revolutionary workers party, which the League for the Fourth International is seeking to build, notably in playing an important role in international workers struggles such as the August 17 Tri-National Solidarity Action with Mexican and Brazilian teachers. Speakers warned that if the Mexican government tries another bloody crackdown, there will be hell to pay, in Mexico, here and everywhere.■