While “Democratic Socialist” Ocasio-Cortez Chimes In 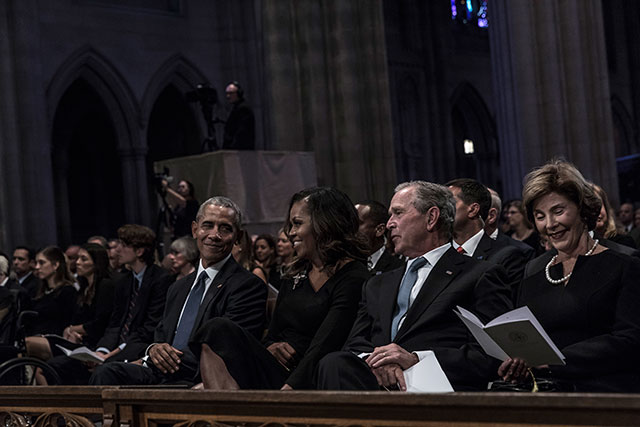 U.S. imperialism lost one of its most vocal and active warmongers on August 25 – six-term Republican senator from Arizona John McCain. Universally praised by ruling-class politicians, Democratic and Republican alike, as a “war hero” and “maverick,” McCain’s funeral at the National Cathedral in Washington, D.C. on September 1 was touted as an uplifting display of “bipartisanship” against the racist demagogue Donald Trump. Former presidents George W. Bush and Barack Obama delivered eulogies. “We never doubted that we were on the same team,” proclaimed Obama, who defeated McCain in his 2008 presidential campaign. And they were indeed teammates in promoting world domination by blood-soaked U.S. imperialism.

This grand family reunion of the bourgeois “establishment” was attended by some of the most infamous mass murderers of this and the last century. There was Henry Kissinger, who as Secretary of State under presidents Nixon and Ford was responsible for, among other crimes, the murder of millions of Vietnamese, Cambodians and Laotians by U.S. bombing and the butchery of Chilean leftists by U.S.-backed dictator Augusto Pinochet. Also George W. Bush, who invaded Afghanistan and Iraq, killing over a million people, and his vice president Dick Cheney, the architect of those wars. And Democrats Bill Clinton, who rained U.S. bombs on Serbia, and Obama, who continued the war in Afghanistan, launched airstrikes and sent ground troops into Syria, and ordered drone attacks that killed hundreds of Yemeni and Pakistani civilians.

Contemplating this rogues’ gallery of “unconvicted war criminals,” a tweet modestly proposed, “Somebody lock the doors at McCain's funeral and just start a war crimes tribunal” (RT, 1 September). The unity of Democratic and Republican notables in an implicit rebuke to the current U.S. president led a writer for the New Yorker (1 September) to characterize the McCain memorial as “a meeting of the Resistance, under vaulted ceilings and stained-glass windows.” Participants in this august assemblage of politicians of the partner parties of U.S. imperialism may have differed on various issues, but they almost all agreed with the deceased senator in deeming Donald Trump soft on Russia and insufficiently eager to go to war with North Korea. They came to praise the warmonger par excellence whose corpse lay in state in the U.S. Capitol Rotunda.

Also joining the chorus of imperialist hymns dedicated to John McCain was Democratic Socialists of America (DSA) superstar Alexandria Ocasio-Cortez.1 The DSA Democratic Party congressional candidate tweeted, “John McCain’s legacy represents an unparalleled example of human decency and American service” (@Ocasio2018, 25 August). This homage is a grotesque pledge of allegiance to U.S. imperialism, honoring a man responsible for bombing civilians as a Navy pilot in North Vietnam, who incessantly beat the war drums over the Afghanistan and Iraq wars, who stood shoulder to shoulder with jihadist cutthroats in Libya and Syria and neo-Nazis in Ukraine. And fellow social democrats, like Socialist Alternative and the International Socialist Organization, who have boosted and enthused over DSAer Ocasio-Cortez, must share in the shame.

A War Criminal, Warmonger and Racist

When writing or speaking of John S. McCain Jr., the bourgeois press invariably describes him as a “war hero.” Not in our book. He came from a long line of U.S. imperialist warmakers and racists. His father (John S. McCain Sr.) and grandfather (John Sidney McCain) were both admirals, and his great grandfather (William Alexander McCain) was a slave-owning Southern plantation owner who fought for the Confederacy in the U.S. Civil War. As a fighter pilot flying bombing missions over Vietnam, McCain’s plane was shot down. He was captured by the North Vietnamese and held as prisoner of war for over five years until his release in 1973. Tall tales of courage and perseverance in the face of adversity have been spun ad nauseam about McCain’s time as a POW, but the bourgeois press never speaks about what he actually did in Vietnam.

Far from being a “war hero,” a “man of honor” or paragon of “human decency,” Senator John McCain was a war criminal who bombed civilians. He flew 23 missions in Operation Rolling Thunder, ordered by Democratic president Lyndon B. Johnson and commanded by the psychopathic mass murderer General Curtis LeMay, who vowed to bomb Vietnam “back into the Stone Age.” An East German journalist who met McCain when he was a POW described how on 14 October 1967, one of the bombing runs over Hanoi killed 76 people, destroying a whole neighborhood.2 McCain received a commendation medal for bombing the Haiphong shipyard on October 18. A week later, while on a bombing run against a civilian light-bulb factory in Hanoi, McCain’s A4E Skyhawk was shot down. 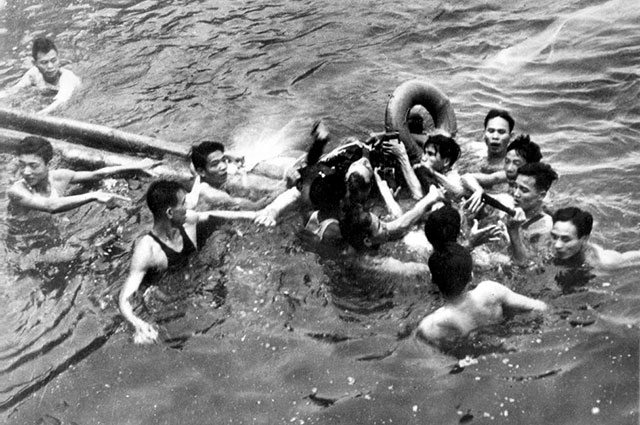 John McCain being rescued by North Vietnamese soldiers after being shot down while on a bombing run against a civilian factory in Hanoi.  (Photo: UPI)

McCain’s arms and leg were broken and he had lost consciousness when he parachuted into Truc Bach Lake. He would have died except for the brave action of North Vietnamese lieutenant Mai Van On, who pulled him from the water, and then prevented enraged civilians from physically attacking the downed pilot. Despite this act of kindness by a man McCain would not have thought twice about bombing, the senator during his 2000 campaign for the presidency unleashed a racist tirade, saying “I hate the g**ks. I will hate them as long as I live,” and that “I will continue to refer to them in language that might offend some people.” It certainly would offend the Vietnamese who braved millions of tons of conventional and incendiary bombs (most infamously napalm) to defeat U.S. imperialism and achieve a victory for all the peoples of the world, including working-class and oppressed people in the U.S.

Continuing to praise the genocidal war against Vietnam in which he was an enthusiastic participant, McCain’s most valuable service to U.S. imperialism was performed as a politician. In 1983, he was elected to the House of Representatives from the First District of Arizona. That same year, he opposed the creation of Martin Luther King Jr. Day as a federal holiday. In 1984, McCain voted to fund Ronald Reagan’s anti-communist death squads in El Salvador and Nicaragua. McCain served on the advisory board to the U.S. Council for World Freedom, affiliated with the notorious ultra-rightist World Anti-Communist League, whose members also included Guatemalan death squad leader Mario Sandoval Alarcón and Ukrainian Nazi collaborator and mass murderer Jaroslav Stetsko, among others (Consortium News, 27 August).

As a senator, McCain voted for the U.S./NATO imperialist bombing of Yugoslavia in 1999, under Democrat Bill Clinton. In 2001, he voted to support Bush’s war in Afghanistan following the September 11 attacks. In 2002, he voted for the Iraq War, calling Iraq “a clear and present danger to the United States of America,” peddling the lie that Iraq had “weapons of mass destruction.” He was a main force in pushing for Bush’s 2007 Iraqi “troop surge,” commanded by General David Petraeus, who brought in specialists to organize death squads, as the U.S. had done in El Salvador.3 While he billed himself as an opponent of torture, McCain voted against a 2008 Senate bill that banned waterboarding by the CIA.

In 2011, McCain worked closely with Hillary Clinton, who was Secretary of State at the time, to initiate a NATO bombing in support of Al Qaeda jihadists in Libya fighting to topple nationalist president Muammar Qaddafi. The result was a country plunged into a brutal civil war and the return of the slave trade to Tripoli. After Qaddafi’s murder, McCain tweeted “Qaddafi on his way out, Bashar al Assad is next” (@SenJohnMcCain, 21 August 2011). Along with Hillary Clinton, McCain beat the drums for U.S. imperialist war in Syria. In 2013, McCain met with commanders of the Sunni Islamist Free Syrian Army (FSA) in Syria, two of whom, Mohammad Nour and Abu Ibrahim, were involved in the kidnapping of Shia pilgrims.

Later that year, McCain met with Ukrainian fascist Oleh Tyahnybok, one of the founders of the fascist Social-National Party and current leader of the fascist Svoboda party. In Maidan Square, the center of Ukraine’s 2013 neo-Nazi-led uprising, McCain stood shoulder-to-shoulder with Tyahnybok, who spews fascist diatribes against what he calls the “Muscovite-Jewish mafia.” McCain also met with the ultra-rightist Dnipro Battalion, which operates in Russian-speaking eastern Ukraine and fired on civilians during an 11 May 2014 referendum on autonomous “home rule.”

This is John McCain’s track record. It was precisely his high profile as an ardent proponent of U.S. imperialist intervention that endeared war hawk McCain to politicians across the bourgeois spectrum and inspired his cheerleaders in the mainstream media.

What’s striking about McCain’s war crimes and endless warmongering is that in virtually all cases, he was joined or supported by Democratic politicians. Bombing of Vietnam? The war was revved up by Democrat JFK and massively escalated by his successor, Democrat LBJ. The Afghanistan and Iraq wars? Democrats voted for both. Bombing Libya? It happened under the Democratic administration of Barack Obama and was spearheaded by Secretary of State Hillary Clinton, who like McCain traveled to Benghazi to hobnob with “rebel” leaders. Support to Ukrainian fascists? They were also backed by the Obama administration and Hillary Clinton. DSA Democratic candidate Ocasio-Cortez pays the price of admission to the imperialist club with her eulogy for war criminal John McCain.

It is really not surprising, then, that Alexandria Ocasio-Cortez, who won the Democratic nomination for New York’s 14th Congressional District and is sure to win the election in November, would hail McCain. After all, she is a Democrat first and foremost, starting out in the office of Senator Ted Kennedy (whose “deep friendship” with McCain she cited in her Twitter eulogy for McCain). But some of the social democrats in and around the DSA, who gushed over Ocasio-Cortez’ primary victory as a tremendous gain for “socialism,” are feeling the heat over her nauseating praise for war criminal McCain.

Some of Ocasio-Cortez’ supporters and apologists treat this as if it were the action of a political ingenue. It is the opposite. It was a carefully calculated display of allegiance to U.S. imperialism and its leading war party. It was the DSA Democrat’s very consciously paying the admission price to the bipartisan imperialist club of the U.S. Congress. She was deliberately showing all the world that she knows how to play the game, and is ready to do so. This was not a blip – this is exactly what “Democratic socialism” looks like. Alexandria Ocasio-Cortez is a legitimate successor to Michael Harrington, Norman Thomas, et al.4 It was only a small taste of the filth that the “Democratic socialists” and their apologists will have to swallow as they swim in the fetid Democratic Party swamp.