Whose Life Is On the Line? Cop Stats 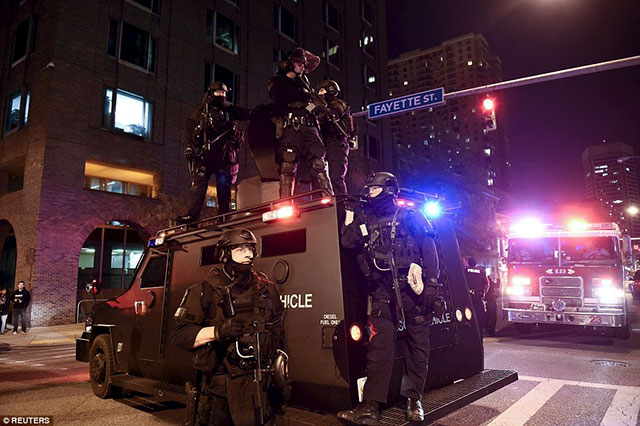 Robocops impose curfew  in Baltimore on 1 May 2015 following police murder of Freddie Gray. Police are armed and armored for civil war. But whose lives are actually threatened? Not the cops’.  (Photo : Reuters)

When in late December 2014 a deranged man gunned down two cops in Brooklyn, one Chinese and one Hispanic, the “conversation” among liberals sidelined talk of police brutality and racist killer cops, turning instead to near-religious worship of the police. Instead of “black lives matter,” the “color-blind” talk that “all lives matter” turned into “blue lives matter.”

From the halls of Congress to City Hall, from the mouths of politicians and newscasters, we hear relentless and hallowed affirmation of the role of the cops who supposedly “go out and put their lives on the line every day for us.” This shibboleth is repeated so often that someone might think that being a cop is actually a dangerous job. Not so. Notwithstanding the recent killing of the two NYC cops, the job is one of the safest and getting safer.

While there are no even remotely accurate official statistics on the number of people killed by the police, the government keeps a careful count number of cops who die while on the job. They are, after all,  the first line of defense of capital, the ruling class depends on them.

According to the Bureau of Labor Statistics being a cop doesn’t even come close to the top ten most dangerous jobs in the U.S. Fishing and logging are far more dangerous. Construction jobs, mining, refuse and recycling collectors have a much higher fatality rates than cops. It’s more than twice as dangerous to be a truck or taxi driver. Of the 900,000 uniformed cops in 2013, 100 died from job-related injury. That’s a fatality rate of about 11.1 per 100,000. (Most of those deaths come from vehicular accident, like ramming a pole in a reckless high-speed chase.)

Moreover, the murder rate for cops is 3.77 per 100,000. That is well below the murder rate for the U.S. as a whole at 5.6 per 100,000. Let’s put that another way: a police officer is 33% less likely to be murdered than the average person. A resident of Baltimore is more than nine times more likely to be murdered than is a cop (“By the Numbers: How Dangerous Is It to Be a Cop?” Foundation for Economic Education, 19 August 2014). And it is safer today to be a cop than at any time since 1875.

According to the FBI, 76 cops were killed in 2013, and of those, 27 were killed as a result of “felonious acts,” the other 49 by accident. According to the cops’ own “Officer Down Memorial page,” the two cops shot in Brooklyn in December were the only NYPD cops killed in 2014 not by accident. Nevertheless, increasingly, a militarized police force includes cops who ride around in mine-resistant Humvees and Bearcats with .50 caliber machine guns, as though their lives were in constant danger. Forget the statistics, you’re a lot more likely to be injured in a bar filled with lot of drunken, off-duty, heat-packing cops than is a U.S. occupation soldier in Afghanistan.

A young black man is far more likely to be killed by a cop than a white young man. But the police do not collect and publish data on this because they don’t want the public (i.e., you) to know. They collect data on every imaginable “misbehavior” except their own use of deadly force disaggregated by race. The thousands of police organizations are permitted by the feds to self-report.

In a recent report, the FBI says there were 461 “justifiable homicides” by the police, but this drastically undercounts the real figures. According to the several data bases now tracking the gruesome body count, police in the U.S. killed upwards of 1,000 people a year in 2014 and 2015. But when cops get killed, the accused get punished. When cops kill, they are rarely charged and almost always get off.

What is really dangerous? Being a 12-year old black kid with a toy gun. A black resident of public housing compelled to use darkened stairways inhabited with trigger happy cops. A young black women stopped for a traffic violation. A black teenager wearing a hoodie in a gated housing complex. Driving, walking or sitting while black, or even opening the door to your own home, can bring a death sentence carried out by the roaming executioners in blue. Being black in America, or Latino, or an immigrant – that is a truly dangerous occupation.■

See also: The Frame-Up of Corey Walker
Jim Crow Justice and the Capitalist State
Bad Apples, Broken Windows, and Other Myths About the Police